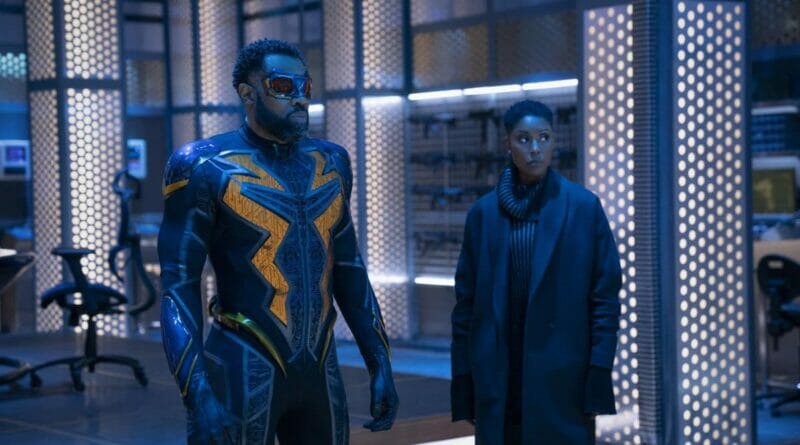 
Black Lightning Season 4 seems to have just recast one of their main cast members! Spoilers ahead!

In last week’s episode of Black Lightning, we saw the Jefferson family clashing yet again but most importantly saw a huge character moment for Jennifer aka Lightning. Lightning has been a huge focal point of Black Lightning this season due to her addiction to her way of decompressing and escaping her family problems in the form of flying up to the ionosphere and absorbing all of its energy.

Jefferson and Lynn have been at each other’s necks since the premiere of this season. Jefferson has spent the past year grieving over the death of Henderson, Lynn had found a new addiction in meta-boosting medicine and trying to fight crime since Black Lightning was no more. Black Lightning has dropped the whole marriage counseling gig as well as Lynn’s attempt to become Black Lightning’s replacement. This week however we still see that things between Jefferson and Lynn still aren’t 100%. Lynn blames Jefferson for what has happened to Jenn as he’s become self-absorbed in his grieving, while Jefferson blames Lynn’s addiction as the reason Jenn became an addict of sorts herself.

Anissa and Grace have been hitting some stumbles now that they are back together and married. This plot point is one of the weakest ones of the season so far. Mainly due to Anissa for some odd reason having a hard time readjusting to having Grace back in her life. I know a year is a long time but if this is someone you love and have no married and have lived with before, I don’t quite see the need to readjust to their presence.

However, the beautiful thing about it is that Grace has met this hurdle with patience, love, and support. Although she’s is not allowing herself to be pushed to the side, she still finds the light at the end of the tunnel and provides the support that Anissa has needed especially when it comes to Jenn’s current situation.

Lala and The 100 vs The Kobra Cartel:

Lala and The 100 have been dead set on putting an end to Tobias Whale in order to reclaim dominion over Freeland. This has been met with some pushback from The Kobra Cartel and their ring leader Destiny. After killing Mayor Black in a failed attempt to kill Tobias Whale, Lala agrees to a peace treaty with Destiny which turns out to be a setup in which the majority of The 100 members were arrested and Lala was killed. Lala comes back to life and finds his escape.

We get a nod to the recent killing of George Floyd in this episode and while I’m all for bringing forth real-world problems, this specific moment felt forced and fell extremely flat. Almost felt like a joke of sorts. While that probably wasn’t the intention it just came off the wrong way and didn’t work for me in any way.

Jenn Becomes a Suspect of Murder:

Chief Lopez has now declared Jennifer the sole suspect of a murder case simply to lay down the law due to her dislike of Metas. In last week’s episode of Black Lightning Chief Lopez claims she would’ve been able to save Mayor Black from being killed if Lightning, Thunder, and Wylde wouldn’t have gotten involved at the scene. Chief Lopez uses this to create a Meta Task Force and asserts her drive to put an end to metahumans by making Lightning a suspect.

During Black Lightning’s closing moments we wait for Jennifer to emerge from the chamber that is being used to piece her back together. As she emerges, Anissa goes to cover up so she’s not exposed and comes to a shocking realization upon seeing her sister. A shocking look is seen upon the entire Jefferson family and while Jennifer recognizes her family, her family doesn’t recognize her as the young woman who emerges from the pod is not the Jenn we saw in the previous episode.

For context, it seems like China Anne McClain has been recast. Shortly after the announcement that Black Lightning Season 4 would be the series’s final season China Anne McClain took to Instagram to share her thoughts and feelings about the show coming to an end and in the process revealed that this current season was her final season regardless of whether or not the series continued. Essentially, she was leaving the show to pursue more personal projects.

This announcement from China Anne McClain also came off the heels of the death of Cameron Boyce as she took his death quite hard and reassessed her acting career and life in general. At the time, it was unclear if China would be sticking around for the entirety of Black Lightning’s final season but it seems like her exit happened much sooner rather than later.

The episode ends on this shocking cliffhanger so there’s no real explanation yet as to how or why Jennifer/Lightning looks different and is currently portrayed by a different actress. Additionally, the Jefferson family did not recognize this new Jennifer so it begs to question how the series will answer any and all questions regarding this possible recast.

Black Lightning Season 4 is streaming now on The CW app.