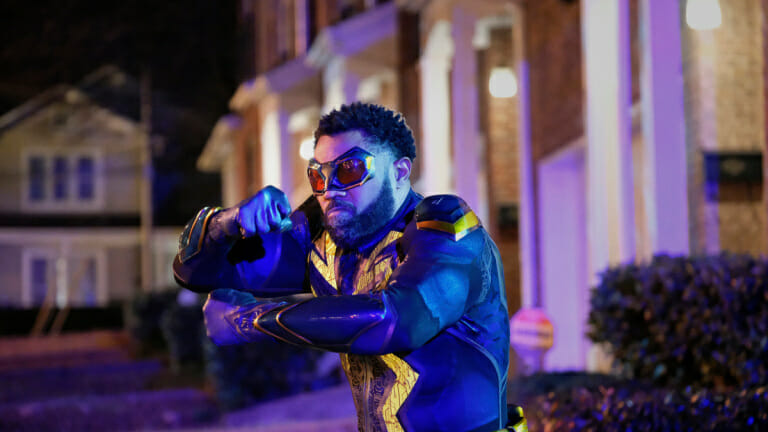 Black Lightning has hit its fair share of bumps on the road to its final season. Whether it’s questionable writing or downright unbearable performances. It’s safe to say that Black Lightning is suffering from the fourth season curse that has plagued every Arrowverse series on The CW.

The episode goes into heavy scientific details and rationale in order to explain Jennifer’s new look and they do a good job at giving logical reasoning as to why Jennifer now looks different. The explanation? After becoming pure energy particles and being rematerialized, Jennifer’s DNA or at least the genes associated with Jennifer’s appearance were rearranged thus producing a new look. While deep down inside it’s still Jenn, on the outside, she’s visually and physically different as she’s also now taller than she was before.

While everyone else accepts Jennifer’s new look rather quickly, it is Black Lightning himself, Jefferson, Jenn’s dad who isn’t as accepting of her new look. After trying to find some sort of irrational explanation as to why she’s not his real daughter, even mentioning that she could even be someone from another universe. Jefferson eventually comes around to accept his daughter’s new look in a rather touching but also a tad awkward scene towards the end of the episode.

As for our new actress Laura Kariuki, she’s added a breath of fresh air to Jennifer this season and much-needed reinvigoration to a rather dull performance from China Anne McClain, who just seemed annoyed and uninterested in her performance and in wanting to be in the series entirely. We knew ahead of the premiere that she would be exciting, but that sense of wanting out was sold thoroughly through her performance.

Seeing Laura Kariuki add that freshness to Jennifer Pierce while also maintaining Jennifer’s core characteristics just felt good to see and speaks volumes about Laura’s talents as an actress. It felt natural and it’s a shame that we will only see her as Jenn for one season of Black Lightning.

Lala, leader of The 100 has been the main suspect in the killing of Mayor Billy Black after a late-night shootout in an attempt to kill Tobias Whale went left. With the help of Detective Shakur, Black Lightning learns that the bullet was used to kill Mayor Black was still encased and was in fact a magnetic bullet rather than your typical gunpowder-filled bullet. In the process, revealing that a meta was the one who killed Mayor Black and not Lala.

Who’s the meta? We do not know but Jefferson has a feeling that it is Tobias’ new assistant. Seeing how Lynn has a blood sample of his new assistant he asks Lynn to create a meta booster and to test it on herself to see if Tobias’ assistant is in fact the metahuman who killed Mayor Black.

The Introduction of Ishmael:

After confronting Destiny, Lala is introduced to Ishmael, a new character to the Black Lightning series and a character with deep ties to the Ras Al Ghul and The League of Assassins in DC Comics. First introduced in Batman and The Outsiders #1 in 2019, Ishmael is not a metahuman by nature but rather created by the Ark Project and his exposure to the Lazarus Pit. We’ll spare you the specifics.

After a showdown with Lala, Ishmael kills Lala and makes it a point that he will continue killing him each and every time he comes back to life. Later in the episode, we meet Ishmael again and we get nods to his involvement with the League of Assassins. Rather than already being a part of The League, Ishmael is trying to get in The League, and the only way he will be granted membership is if he tallies up 100 kills. Lala put him at roughly 94-96 kills, so Destiny tasks him with killing The Pierces.

When it comes to shows centered around Black people, these shows make it a point to tackle and represent the injustices and racism the Black Community face on a daily basis.

Last week, during the shootout scene between The 100 and the Freeland Police, we get a nod to George Floyd’s murder when Lala’s right-hand goes off running from the police he stumbles and starts telling Detective Shakur that he can’t breathe. In which Detective Shakur replies that the reason he can’t breathe is that he is fat and that he should respect the dead. I think the writers forgot to look in the mirror when they wrote this.

In this week’s episode of Black Lightning, however, we get a reenactment of Breonna Taylor’s murder. After Freeland Police enters a woman’s home with a “no-knock warrant” her boyfriend who thinks the apartment is being broken into grabs his firearm to defend the house.

He ends up shooting a police officer and they retaliate by firing back. As the shots go flying throughout the apartment the Black woman is shot and killed. Following her death riots, looting and protests ensue demanding justice for her murder then the entire is undone as it’s rewound and Black Lightning comes in to save the day and prevents the woman from being killed.

In terms of representation, while we are all for it, these two specific moments in back-to-back weeks are rather misrepresented. I’m sure the intentions were to shed light on the real-world issue and injustices and police brutality on the Black Community but just the scene in particular just rubbed me and everyone else on social media the wrong way.

As I mentioned at the start of this review, Black Lightning has had a rather bumpy ride in its first six episodes and this Breonna Taylor reference is the biggest bump on the road. Not to mention we’re going from this to a backdoor pilot for Painkiller next week.

I’ve had my fair share of praises for this show and this was a great episode and it was delivering on all aspects, with Laura Kariuki being the highlight of the episode but then it takes a plunge once it hits this Breonna Taylor reenactment scene. Especially when we don’t have superheroes in the real world stopping police from wrongfully killing civilians, especially Black people in the Black Community.

Black Lightning airs every Monday night at 8 pm ET on The CW.