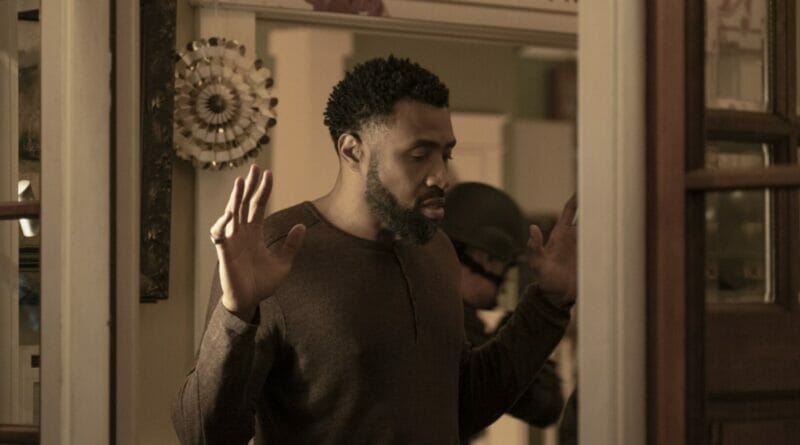 Black Lightning returned last week with a backdoor pilot episode for the Painkiller spin-off series, with a strong connective tissue missing, this week’s episode of Black Lightning tries its best to solidify that connective thread but it seems redundant and falls a bit flat, damn near forced in an attempt to keep fans hooked on Black Lightning while further enticing them to watch the upcoming Painkiller series.

As things pick back up for the Pierce family, they welcome back Anissa and Grace as they return from Akashic Valley after celebrating their honeymoon. The goal here was to tell Anissa’s family that she and Grace got married in secret but Anissa called ahead to make more of a ‘welcome to the family’ celebratory event rather than an informal and surprising event.

While things seem all peachy keen, that brief moment of happiness is cut short as the FBI shows up at Jefferson’s doorstep with a search warrant. The FBI informs Jefferson that he is being investigated for embezzling Garfield High School’s school fund. Which we all know he hasn’t done.

It is later revealed that Tobias was the one behind the embezzlement but found a way to clear any traces that lead back to him instead, make it more than evident that Jefferson was the one doing the embezzlement. Thanks to TC and his hacking skills he was able to find this information. Things don’t stop there for Jefferson, the government has frozen all of his accounts and assets, furthermore, Tobias, who is currently running for Mayor is using his political influence to build a new hospital on the land in which Jefferson’s father’s house is located.

Last we saw Jefferson there, he left the place in the hands of Marcel Peyton, a former teacher at Garfield High School who lost his job and was homeless. Once again, Tobias using his political influence, uses Marcel Peyton’s situation to his advantage and takes credit for housing him and his family. Tobias paid Marvel Peyton with a relocation fund which permitted him to purchase a new house for him and his family.

While TC reveals to Jefferson how Tobias has framed him with the embezzlement charges, we learn about Val’s powers as Gambi inadvertently nullifies TC’s powers. Here is the revelation that Val has nullifying powers as a meta. So she isn’t the one who killed Mayor Black, thus checking her off the suspect list. However, due to Gambi hacking a camera feed we learn that Tobias’s bodyguard Red is the one with the magnetic meta powers thus revealing that he is the one who murdered Mayor Black.

Some of the less interesting points of this episode focus on Jennifer and her dealing with her new face and trying to figure out a way to deal with that now that she is returning to school. Her way of dealing with it is wanting to skip school but Jefferson doesn’t allow it.

In order to help her with the process, they conjure up a fake backstory and want Jennifer to act like she is her own cousin and daughter of beloved Green Lantern John Stewart. John Stewart has been teased and vaguely mentioned throughout this series but no on-screen appearance has yet to happen. We also get a weird love interest plot between Jennifer and Montel a classmate of hers and this suddenly blooms due to him protecting Jefferson’s name during a hallway protest. Montel and Jen further bond over band class which has all of a sudden been cut from the school’s program. Jennifer convinces Montel to help her raise funds to fund the music program at the school.

One of the weakest plot threads in this current season of Black Lighting has been Gambi and his relationship with Lauren, who’s one of the leading people behind the DEGs Monovista, the Freeland Police Department and Tobias Whale want to get on the streets in order to stop metahumans.

This week we learn that Monovista has introduced gene editing technology and Gambi successfully steal promethium from Monovista in order to finish making new suits for Black Lightning and company. His means of getting his hands on things or rather finding his way around Lauren are rather boring to say the least.

The lowest point of this episode overall was the fight between Grace aka Wyld and Anissa aka Blackbird, who was up against Ishmael. A fight that rather lacked a lot seeing the individuals involved in the fight. Additionally, we get a rather forced connective thread between the Painkiller spinoff series and Black Lightning with the revelation that TC is aiding Philk with restructuring Khalil’s head and subsiding Painkiller. After informing Khalil about Jefferson’s embezzlement charges and how Tobias is behind it all, Khalil offers his help.

Black Lightning however further sets up two plot threads centering around Jennifer and Ishmael. Anissa looking for more information gets little to almost no information at all from Gambi on who Ishmael is other than his name…not sure how much that is going to help Anissa going forward.

Additionally, we get a huge tease regarding Jennifer’s DNA test results. With a concerned Lynn who calls Jefferson to inform him about the results (which she doesn’t) the episode further teases what Jefferson has been concerned about and that is that he fears that this new version of Jennifer is not really Jennifer, therefore she is not his daughter.

Overall, Black Lightning’s mid-season return is off to a rough start and with this being its final season it has failed at making it a rather memorable season. Now I could be ahead of myself and making those claims early. But it seems evident with what we’ve seen so far that Black Lightning is indeed suffering from that Season 4 curse.

Black Lightning airs every Monday at 8 PM ET on The CW and streams free the next day on The CW app.