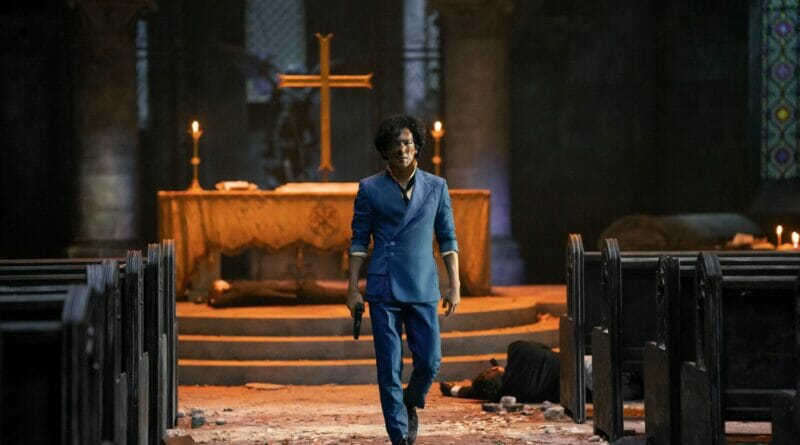 
**DISCLAIMER: THIS ARTICLE CONTAINS SPOILERS FOR THE SEASON FINALE OF COWBOY BEBOP**

Cowboy Bebop fans across the world are now hunting bounties alongside Spike Spiegel, Jet Black, and Faye Valentine as the highly-anticipated live-action series has now been released on Netflix. Early reviews for the series delivered a mixed bag. Some critics praised the series for its near faithful adaptation of the source material while other critics called the series an abysmal parody of itself.

Despite how fans or critics felt about the series before and after watching the new series, one thing fans of the original anime were looking forward to the most was Edward aka Radical Ed. Her absence from all of the officially released trailers, clips, and promotional material (up until a few hours ago) really raised some eyebrows, and rightfully so.

Despite the small role she played in the original anime, her hacking skills really aided Spike, Jet, and Faye when hunting for bounties. And her relationship with Ein was something anyone who previously watched Cowboy Bebop really wanted to look forward to in this new series. So does Radical Ed show up in the Cowboy Bebop Netflix series? The answer is yes.

By the end of episode ten, Spike Spiegel is seen walking down an alley, drunk and still injured from his near-fatal battle with Vicious and encounter with Julia. Spike proceeds to fall on the ground nearly losing consciousness. We then hear some quirky music and hear Edward calling out to Spike Spiegel. She urges Spike Spiegel to get up because she had a lead on a bounty by the name of Vincent Volaju, The Butterfly Man. She urges Spike that he must be stopped. Perfectly teasing one of, if not the biggest villain for Cowboy Bebop Season 2.

Vincent Volaju makes his anime debut in the feature film “Cowboy Bebop The Movie: Knocking on Heavens Door” in which he was the main antagonist. Vincent Volaju was a soldier in the Mars Army and veteran of the Titan War. During the war, he was a victim of an experimental military project. Later becoming a terrorist and dying during the pursuit. Volaju devoted himself to finding the gateway to heaven at any cost.

During his time in the Titan War, Volaju and his unit were subjected to weaponized nano-machines by the Army as part of a series of experiments. The nano-machines replicated and attacked the brain and nervous system before breaking down into proteins and leaving the body. Made of protein and programmed to mimic lymphocytes when outside a source of body heat, they were virtually impossible to detect. Volaju himself was also given an experimental anti-nano-machine in his blood.

As a result, he survived but also lost the memories of his life, including a relationship with Elektra Ovirowa. He only remembered fighting and suffering on Titan. Going forward, he had difficulty distinguishing dreams from reality. He also perpetually sees glowing yellow butterflies in his vision, a symptom other victims suffer as the virus takes effect. Hence his nickname the Butterfly Man, something Radical Ed says to Spike Spigel during the final moments of the Cowboy Bebop season finale.

While some fans may be disappointed to learn that Radical Edward doesn’t make a full appearance until the very last scene of the first season. Others might be excited for the potential of a bigger role she may be playing in Cowboy Bebop Season 2 as opposed to the smaller role she played in the original anime series.

This is something that’s been a huge factor in this live-action Cowboy Bebop series, a huge focus on characters and character development and giving them all much more to work with compared to their anime counterparts; with Julia and Vicious being prime examples of that. Are you excited for more Cowboy Bebop? Are you excited about Radical Ed’s live-action debut? Let us know!

It has since been announced that newcomer Eden Perkins is portraying Radical Ed in the live-action series. Cowboy Bebop is streaming now on Netflix.