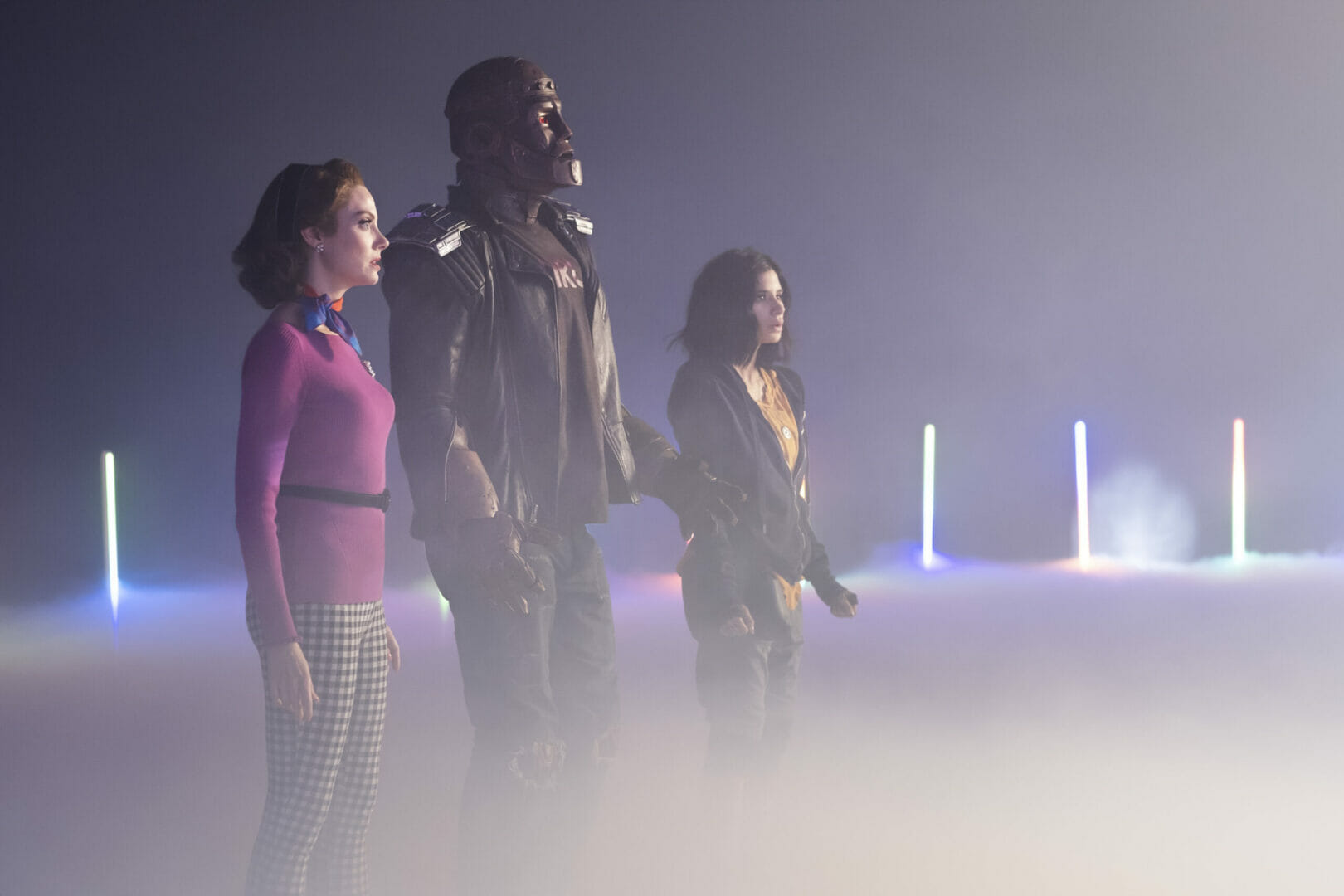 
In an attempt to help save Niles Caulder, the Doom Patrol must now search for the Terrifying Dr. Tyme…with a ‘y’.

Episode 2 gives you the Dorothy scene but from the perspective of The Chief Niles Caulder. The utter horror in Niles’s eyes as he sees the treatment of this innocent little girl by the savages at the “Freakshow” is enough to bring any civilized person to tears. Clearly this season will revolve around Dorothy and her learning to keep her powers in check but it seems as though the overall arc will be the Doom Patrol learning to be better people.

Did I forget to mention that the Chief is dying while they’re all learning to be better people and that another arc this season will be them trying to find a way to make Chief Immortal… Yup, this season is filled with all those wacky types of mini-arcs surrounding the over-all main story so buckle up buttercup we are in for a classic Doom Patrol ride!!

We see just how emotionally charged this season will be and just how damaged the Doom Patrol is when Cyborg shows up to participate in a trauma group and is forced to be vulnerable. While Cyborg is dealing with his pain over the truth behind his mother’s death, Crazy Jane is trying to keep the other 64 personalities trapped inside her from taking over as primary, Larry is attending the funeral of one of his sons, Rita is trying to help the Cheif find a solution to extend his life and Cliff… well Cliff is off being the best, biggest A**hole he can be. Remember when I said this is an emotionally charged season… I wasn’t kidding.

Chief explains to Rita that the only way to extend his life is to find a substance known as Continuinium unfortunately they can only get it from a man known as the Terrible Dr. Tyme. Now, something that you must know about Dr. Tyme is that he has traversed actual-time living from one era into the next, which makes him a very deadly foe.

Niles is against the team going up against Tyme but as Cliff is perfecting being as A**hole he deliberately goes against the Chief’s better judgment and decides to go on the mission; as we can see Cliff has oh so much growing up to do. The Doom Patrol team of Rita, Cliff, and Jane stumbling into the realm of Dr. Tyme and that’s when the FUN ensues!

This was honestly the type of nonsensical fun that I was expecting from the Doom Patrol and I mean that in the best possible way! Dr. Tyme is getting down with the boogie down, Roller Disco Style, I won’t ruin the optic for you but let’s just say it’s a must-watch! Long story short Rita tries to remove Tymes helmet and ends up smashing his head, it doesn’t sound fun but it is trust me, they fix him and are kicked out of his realm. In short, they fail to save the Chief with this substance.

Meanwhile, in the trauma group, Cyborg makes a new friend a woman named Roni Evers and for the first time, we see Cyborg break out of his shell and be vulnerable. Cyborg and Roni bond over their mother issues and begin what seems to be a friendship. We see just how she forces Cyborg to thing outside the box when she gets mugged, although she stops the mugger she doesn’t want cops involved, she would rather people not be judged by the worse thing they’ve ever done. We’ll see how this experience helps Vic grow as a person through the season.

Finally, we get to the Larry part of the story. After spending so much time away from his family he comes back when one of his sons passes. Although he tries to be discreet at the funeral, he ends up bumping into a man who we find out is his other son. Here is where Larry is forced to face the type of Father he was. Larry was distant, he was hard to please, although Larry was battling with his own personal issues he projected his flaws and insecurities on his family. It’s tough to see where Larry goes from here emotionally but the ending definitely leaves us curious to see what happens next.

There is so much for us to unpack from just this episode, it is a must-watch in order for you to get all the subtle nuances of it all. I was concerned that after the season 1 finale this show would struggle to keep the tempo and the storytelling but I must say that season 2 isn’t skipping a beat. If Doom Patrol keeps this pace it might just be the DC show of the year.

For more on Doom Patrol, film news, trailers, and updates make sure to keep it locked right here at The Nerdy Basement. And while you’re here, please consider supporting us on Patreon. It’s an easy way of supporting us so we can keep proving you with your Nerdy News!