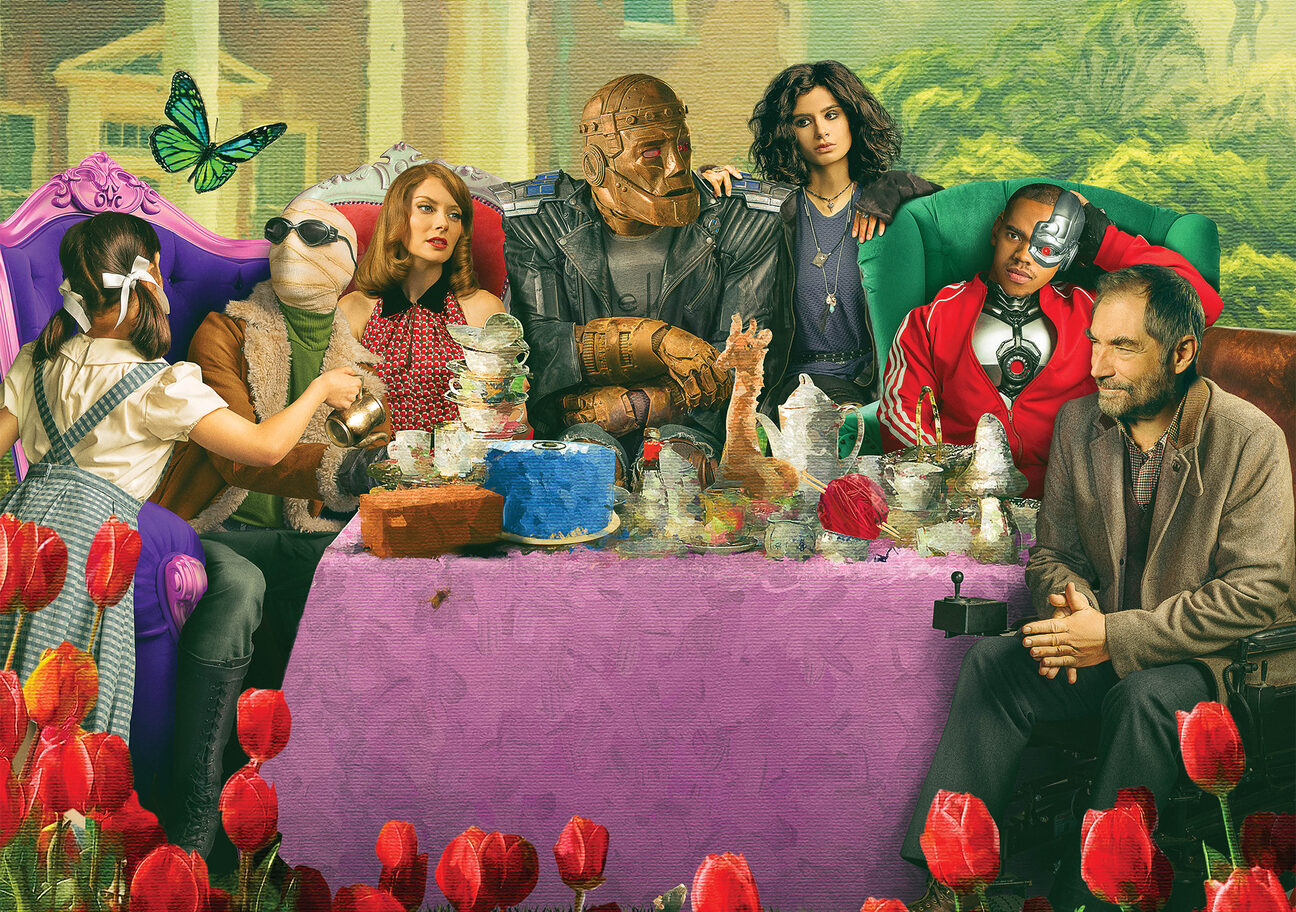 
Our Doom Patrol just cant catch a break, pain is a constant reminder in their lives. And Red Jack is happy to show them some more!

The first two episodes of season two have been phenomenal, and episode 3 has not disappointed! The characters are on a journey that will challenge not only their own sense of self but their very lives! (Which is just another day for this team) And as dysfunctional as this group of individuals are they are a family and families have a bunch of issues to work through. Especially when it comes to ‘dear old dad’ Niles AKA The Chief.

The episode continues to unravel the traumas each member of the team have been dealing with. Cliff’s resentment with Niles for choosing to use him as an experiment and forsake his wife and child. Vic dealing with his post traumatic stress from Mr. Nobody. Jane’s continuing inner struggle with The Underground. Rita with the disappointment of feeling as just a useless experiment, and Larry now confronting the loss of his son, also now being kidnapped. Niles attempts at being a decent father to Dorothy but is still dealing with the guilt of all his wrong doing to the Doom Patrol.

Episode 3 is everything you want and need it to be. A reason to come back next week to see how our heroes are coping with their new predicaments. Jammed packed with drama and comedic timing! Anyone new to the team or diehard fans can appreciate the storytelling here. Everyone is dealing with something and the story flow couldn’t be better. Two thumbs up for this episode :). But before I go into some SPOILERY territory, if you haven’t caught up to any of the seasons please feel free to come back after watching these episodes on DC UNIVERSE as well as checking out our recent reviews of the previous episodes below… Now onto the show!

Episode 3 wasted no time to add in a new layer of Niles Caulder’s already disliked persona. The beginning minutes showed a young Niles in London encountering our villain Red Jack for the first time back in 1888. But well get back to that in a bit. Cliff’s anger and hate towards him have not faltered one bit. So he makes sure to share his daily dose of disrespect to him, especially when he’s having a sweet moment with his daughter, as their exchange became ugly. Cliff then fueled by spite gains the idea to go see his daughter in Florida and drags Jane along.

Jane’s internal struggle comes to a realization during this road trip. The Underground is not pleased by her leadership as the primary, Kay is in danger by the choices that Jane has been making and a decision must be made. With choosing to stay with the Doom Patrol her role as primary is in danger. And you will see later on things don’t work out for her. But we do know the Underground chose to lock her up due to her misguided choices, so we can only wait and see who is the next up in taking the role of primary,

With the group splitting up to deal with their own issues, Red Jack makes his presence known by sending an invitation to The Chief with a piece The Negative Man Larry. If you have forgotten; Larry after attending his son’s funeral starts to make his way back home. But abruptly is taken by a swarm of butterflies. Now that we know Red Jack took him Niles begs for Rita’s help to save Larry because Red Jack is no joke! Reluctantly Rita agrees.

Here are some details on Red Jack. Simply put is a GOD like entity. His powers transcend most relative thinking. But mainly he is an interdimensional being who feeds of misery, suffering, and pain. He went so far as to come into our dimension and become the legendary Jack the Ripper! So totally evil, If you want to learn more about Red Jack click here to get a bit more info of his origins in the comics.

Now snatching Larry was just his way of getting The Chief’s attention. You would think this was someone that wanted revenge on him like Mr. Nobody but on the contrary, this being is just bored with what he’s been doing for millennia and wanted a new pet project. And he can’t forget the young boy who caught his eye so many ages ago in London. So he wants Niles to be his new apprentice in the art of pain, which he already says he has a talent for.

Segway to the other team members for a moment. Vic’s begins to gain feelings for Roni which eventually leads to her sabotaging or testing his resolve in truly wanting a relationship with her. This brings more drama to the fold when Vic was slowly gaining some sense of happiness. Though I don’t see their story ending just yet it was a big moment to see especially for a character who has done his best to stay professional throughout the series.

And in Cliff’s case, he just goes and shows the Chief isn’t all that wrong about him either. Hoping to prove how wrong Niles was about his time as a father (horrible). He makes his way to see his daughter and let her know he’s alive… just at the worse timed moment possible! As comedic as the scenes were you saw the selfishness that Cliff dealt with throughout his time with his family before his demise. Not being able to see the pain his daughter was going through on the day of her baby shower its a full-on cluster *&^*(&. But you can’t help but feel sorry for both Cliff and daughter.

Back to the main antagonist of the episode. Besides seeing The Chief have this incredible exchange with Red Jack (played by Roger Floyd) Pain Patrol brings a new light to Larry and Rita’s friendship. Being the oldest member of the house a bond was formed that transcended the norm. Larry was strung up like ham and forced to kill prisoners of Red Jack to feed his desire for suffering. But Rita without hesitation barges in the room to free him and in doing so shows the newfound control of her powers. The flashbacks up to that moment created a beautiful scene between the two that makes the episode even more of a needed tender moment.

Eventually, the rescue does happen and with a moment of distraction, Niles was able to gain the moment of surprise needed to kill Red Jack with his own knife. (look up how they beat Red Jack in the comics, pretty similar scenario 🙂 ) But not before Jack showing Niles the flaws of many of the decisions that he made. This prompts Niles to begin his road to redemption, we see him begin sketches on what says Robot Man 2.0, which for my fellow comic nerds only means we’re going to see some upgrades very soon!

An incredible episode to say the least. DC Universe has been developing a great story with this series. I was worried for a moment how they would treat Red Jack’s design and I’m so pleased by their approach. A floating head only works in so many scenarios lol. I hope you all enjoyed our reviews thus far and let us know in the comments what you thought. As always Stay Neerdy My Friends!

For more on Doom Patrol, film news, trailers, and updates, make sure to keep it locked right here at The Nerdy Basement. And while you’re here, please consider supporting us on Patreon. It’s an easy way of supporting us so we can keep proving you with your Nerdy News!