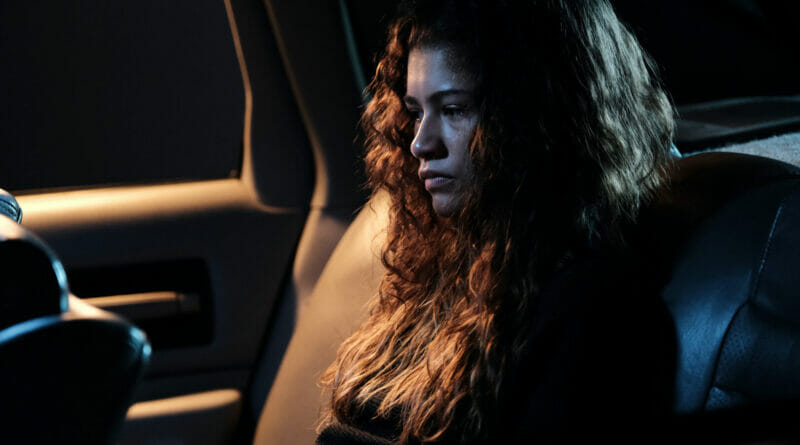 “Euphoria” is one of many shows whose production cycles were disrupted by the COVID-19 pandemic. This meant that along with the standard hiatus that came with the end of season 1, it was further prolonged by the need for social distancing guidelines and Hollywood shutting down. Yet as the saying goes, the show must go on.

Filming eventually resumed, with two special episodes acting as a bridge between the two seasons being released, and season 2 officially starting January 9th. Finally, viewers could return to the intense and dreary world of Rue and company, and see how the consequences of everything in season 1 would play out. Although we are two episodes in, the show is already showing promise; despite its imperfections, which do occasionally stick out like sore thumbs, the same amount of dark charm and intrigue remains in the sophomore season of“Euphoria”, avoiding a slump and keeping things just as engaged as the first time around.

With a new year comes new opportunities, and that comes for everyone in this show in spades. In spite of her heart-wrenching talk with Ali and her brief reunion with Jules over Christmas break, Rue is back in the heaps of drug usage after relapsing at the end of season 1. Despite that, Jules wants to start over, and Rue jumps at the chance of having her even as she keeps taking drugs.

Outside of that, Fez is dealing with new enemies and friends on all sides of life, both with his growing drug business and in his high school life. Nate, in trying to move on, ends up dragging Cassie into his web of lies and misdeeds, all of which occur behind Maddie’s back. Even Kat seems to be going through more trouble, feeling a lack of pizazz in her relationship and dealing with self-hatred. After a fateful party where everything seems to signal new change for the future, one has to wonder: what paths will these characters take, and what will they want from life, actually help them or drag them further into darkness?

“Euphoria” is well-known for its strong performances, shooting its main cast into the spotlight from episode 1. This trend luckily continues in season 2; after her Emmy-winning performance, Zendaya keeps the same level of allure and tragedy in her role as Rue. Her perspective, while flawed, is compelling to watch, and through all her ups and downs you want to see her get better, even if the chances of that grow slimmer with most of the decisions she makes.

Luckily for her, the supporting cast members are just as compelling, with quite a few standouts. Hunter Schaefer acts as a great grounding point in the show’s insanity as Jules (with her continuing to have great chemistry with Zendaya), Jacob Elordi remains one of the most despicable antagonists in recent years as the sociopathic Nate, and Sydney Sweeney has easily become one of the show’s most notable parts as Cassie.

Though her journey seems more negative this time around, Sweeney shows a great amount of vulnerability in every scene she’s in, making a character path I would normally detest become one I pity instead, which goes to show how skilled she is at what she does. Some performances are a bit questionable, namely Alexa Demie as Maddie, who can occasionally deliver her lines a bit monotone or in ways that feel out-of-place. In the context of her character though, one who has been through so much yet seems desensitized to it all, it does make sense, and Demie is still fun to watch all the same.

Out of all parts of “Euphoria” that the show is known for though, it is hands down most praised for its direction. There were so many moments in the premiere season where it felt like a breath of fresh air, with plenty of shots full of color and mystique. In a way, it felt like you were in a dreamscape filled with blissful highs and damning lows all the same. While season 2 does have strong aesthetics like season 1, it achieves these feats in a very different way.

To quote show creator and director Sam Levinson from the breakdown of episode 1, “If season one was sort of a house party at 2:00 a.m., season two should feel like 5:00 a.m., way past the point where everyone should have gone home.” The show has replaced the in-your-face flashiness of season 1 with a more grounded approach to filmmaking, and while it is different, it does feel appropriate and equally well-done.

With the usage of actual film along with cinematography choices, “Euphoria” feels a lot more dramatic in a visual sense on top of the events that were transpiring on screen. There is a great amount of oomph to every sequence that makes everything feel more serious and almost a bit reflective. Several moments within these two episodes are iconic in look alone, which shows that “Euphoria” can still pull those kinds of moments off with this new style.

On top of that, there is a lot of visual storytelling as well, with certain camera movements or shots providing great subtext that fleshes out the writing in new ways. In a way, it feels like “Euphoria” is putting its characters under a more critical lens; with its new direction, it feels like the show is willing to highlight the faults and especially the downfalls of each character, should said moments come. That rawness is what kept these first two episodes so compelling, and I for one welcome the new look.

Complimenting the show’s new look is the music, both with the original score and the licensed songs it uses. Euphoria Season 1 had plenty of bangers throughout its runtime, using artists like Anderson Paak to Lizzo to The Chordettes and everything else in between. Combined with the mysterious score by composer Labrinth, the show felt like an amalgamation of songs made for partying and reflecting all the same.

This trend continues in season 2, with the first two episodes alone having plenty of recognizable licensed songs, running the musical gauntlet from Judy Garland to Hall and Oates to Tupac, and Labrinth continuing to grow in his stylings for drama and personal moments. One thing is certain when it comes to Euphoria’s music: like it or not, you can never get bored of it.

The writing in the show remains consistent with its premiere season, for better and worse. Storylines from season 1 are continued in ways both expected and completely surprising, with the show’s new plot threads weaving decently enough into its tale of high school’s underbelly. There are plenty of tension-filled moments that will have you either on the edge of your seat or pulling for characters to make certain choices, all of which are boosted by the new style in direction. “Euphoria” will drag you every which way as its stories unfold, and yet it’s a ride that you cannot pull yourself away from.

In its extravagances though, the show does not shy away from tackling important themes. Although we are only two episodes into the season, there is a very powerful moment in episode two that, without giving too much away, does a great job at pointing out the flaws in toxic positivity. In a world where social media drills in the importance of loving yourself, “Euphoria” does a great job at showing the double-edged nature of this message. Sometimes people are not okay, and it is important to recognize that rather than try to smother it under the guise of loving yourself. It is okay to not be okay, and the show highlights that well in this sequence.

Levinson is not a flawless writer, however, and there are certain aspects in which the show is faltering, at least thus far. With this new season comes three new main characters, and while all their actors do a good job in portraying their roles, their parts in the story can sometimes feel superfluous. For at least two of the new characters, I still have trouble figuring out what their roles in the overall story are; I do realize that this could change in future episodes, but as it stands, the show could do just fine overall without them.

Finally, the way the show handles sex. Although the actors in “Euphoria” are in their 20s or above, at the end of the day most of them are portraying high schoolers. As such, the show can be incredibly awkward when it comes to sex scenes, mildly so when the shots are somewhat tasteful and/or short and extremely so when the exact opposite is true.

They do have a purpose within the story, as they either further external plotlines or highlight characters’ insecurities, but there is something to be said about how extra the show can occasionally be with this element of its story. This is not something to solely pin the blame on “Euphoria” for, since plenty of other TV shows do the same thing; however, that does not mean this elephant in the room should not be addressed.

For all of its downs though, season two of “Euphoria” is an incredibly compelling watch. It is constructed marvelously thanks to the efforts of the people in front of and behind the screen, and everyone involved with the show clearly cares about it. These facts have led to a sophomore season that is on par with the first in unanticipated ways, and one that I cannot wait to see unfold. The party may be a less colorful one than before, but its dramatic new look is something I embrace with open arms as “Euphoria” presses on.