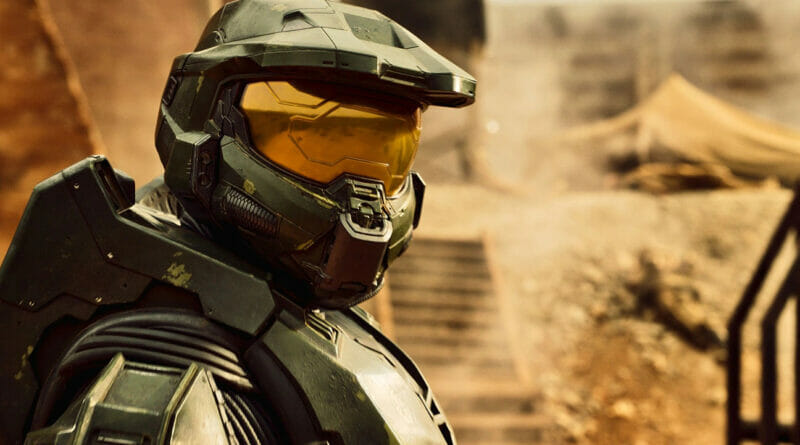 
‘Halo’ shines the most when we are following Master Chief and the rest of the Spartans. Bringing heavy action and a steady pace, the series keeps you engaged even when the action is dialed all the way back.

It’s been a long time coming for the live-action ‘Halo’ series and fans have been eagerly awaiting its arrival. Originally set to premiere and stream on SHOWTIME, the Halo series ultimately found a new home over on Paramount Plus. Produced by SHOWTIME in association with 343 Industries, and Steven Spielberg. The Halo series also stars Pablo Schreiber as Master Chief, Natascha McElhone as Dr. Catherine Halsey, and Jen Taylor as Cortana.

The ‘Halo’ series is based on the video game franchise of the same name and will take place in the universe that first came to be in 2001. Dramatizing an epic 26th-century conflict between humanity and an alien threat known as the Covenant, ‘Halo’ the series weaves deeply drawn personal stories with action, adventure, and a richly imagined vision of the future.

Coming off the massive success that is ‘Halo’ and its latest video game franchise installment, ‘Halo Infinite’; just like many other Halo fans, I was more than eager to jump into this series and back into this world. Despite not playing every single ‘Halo’ game that’s ever been released, the mere fact that this series takes place on its own timeline rather than sticking to the video game’s main canon made it all the more welcoming as a simple viewer and casual fan.

While that may turn some hardcore fans away, I think it opens the door for everyone to jump into this series without doing a boatload of the homework that is required in order to understand the story that precedes it if it was a beat for beat adaptation of the video game’s story. These first two episodes feel very much like a Halo story. As we are thrust into this universe and see the beloved super soldiers known as the Spartans, along with the Covenant, beloved weapons like the plasma sword, and even the infamous warthog. Everything about these first two episodes absolutely screams HALO! And I feel like that is the series’ biggest strength.

However, where these first two episodes really take a dip is by introducing us to the character of Kwan Ha played by newcomer Yerin Ha and her homeworld of Madrigal. Kwan Ha is an entirely new character in the world of ‘Halo’ created specifically for the series. And while she stands for what’s right and the protection and liberation of her people. Kwan’s pov of the story is not as intriguing as intended at least not yet. Especially when you have the likes of Master Chief and the rest of Spartans aka Silver Team doing all of the heavy liftings.

In the series’ defense, however, I can understand the need to want a more humanized character for the casual viewer to follow and truly connect with and ultimately engage with. Kwan Ha serves more as their connective thread and visual frame into this world rather than keeping up with Master Chief and his Silver Team for nearly 60 minutes. Especially when there’s a much bigger hand at play when it comes to the Master Chief.

Another huge detriment of these initial two episodes is Master Chief’s face reveal which comes towards the end of the first episode. This was something that was reported and confirmed, and also marks the very first time in Halo franchise history that the Master Chief reveals his face. The only reason I say it is a huge detriment to these first two episodes is that the face reveal happens way too early and way too frequently in the following episode. It takes away from the grandeur that is the Master Chief and the overall mystery of “who is the man under the helmet?”.

It all boils down to removing the allure in the mystery that is Master Chief. That mystery is what makes Master Chief, THE MASTER CHIEF. I’m all for wanting to show off your leading star’s face but this face reveal could’ve come much later rather than sooner. However, Paul Schrieber is an absolute gem as Master Chief and so far in the series, is the absolute standout.

He truly encapsulates the duality of the character in this version of the story. He has that allure and broodiness when he’s under that helmet, but is also humanizing enough to connect with when he takes it off and you get to know the real him. So while I am disappointed in how quickly his face reveal happened, humanizing the character so the viewer can relate to him works to a certain extent.

These first two ‘Halo’ episodes shine the most when we are following Master Chief and the Spartans. The mystery behind Master Chief’s costly decision and the reason that leads to Dr. Catherine Halsey’s activation of Cortana makes it all the more interesting. ‘Halo’ has the action and pacing to keep you engaged even when the action is dialed all the way back. You feel this immensely when it comes to the second episode of the series which focuses heavily on exposition in order to further push the narrative and learn more about the Master Chief and the characters we follow.

If anything, the first 20 minutes of the premiere episode and the huge action sequence between the Spartans and the Covenant are huge indications of what to expect from this series when it comes to its action sequences. The series’ massive and vastly beautiful set designs, whether practical or CGI are another huge highlight for the series thus far. Places like Planet Reach and Rubble are perfect in terms of characterizing a technologically advanced civilization vs a rundown-down city full of rejects and outlaws. Each world feels alive in its own unique way, Madrigal included.

There’s a lot to enjoy about this ‘Halo’ series so far with these first two episodes and it only leaves you wanting more. Getting just a sample of this new series, I can see why SHOWTIME and Paramount Plus have decided to move forward with a second season. They know they have a winner on their hands and have decided to run with it. Here’s to hoping that the hardcore fans and the rest of the casual fans like myself, also enjoy the series as much as I have so far.

‘Halo’ premieres March 24 on Paramount Plus.