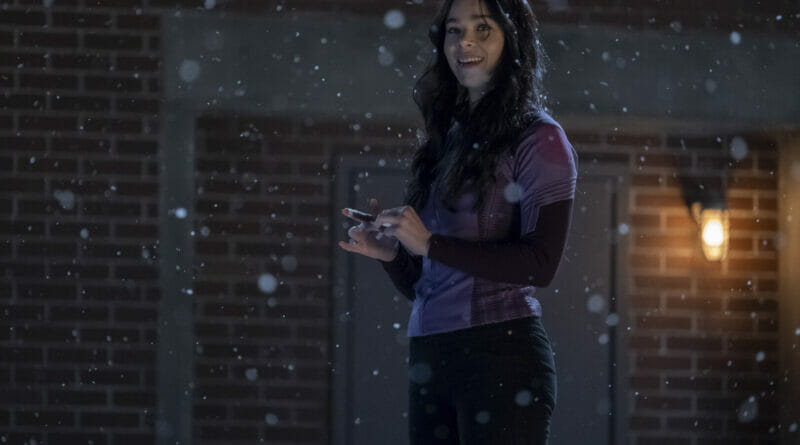 
Eyes on target, because “Hawkeye” has just launched on Disney Plus! — SPOILERS AHEAD!!!

Marvel Studios’ “Hawkeye” series has just premiered its first two episodes on Disney Plus. Bringing forth the live-action debut of fan-favorite Young Avenger and West Coast Avenger member Kate Bishop played by the stunning Hailee Steinfeld who stars alongside MCU veteran Jeremy Renner. Marvel Studios’ “Hawkeye” series brings something that the MCU has long been missing, street-level heroics without the flashy powers and need of an Avengers-level threat to bring the big boys out.

Jeremy Renner’s Clint Barton/Hawkeye’s spot in the limelight was long overdue and it is finally here. It’s something fans have been clamoring for since the archer made his live-action debut in Thor (2011) and more so after his full debut in The Avengers (2012). The time has finally come for Hawkeye to be more comic accurate, focus on street-level criminals, be a mentor to a soon-to-be member of the Young Avengers and be pals with the best bud, Lucky the Pizza Dog.

“Hawkeye” is set two years after the events of “Avengers: Endgame” putting the series in the year 2025. With its story taking place over the course of six days right before Christmas. The series wastes no time in introducing us to the overachieving, smart-mouthed Kate Bishop in 2012 during the Battle of New York. Where Kate Bishop witnesses Hawkeye in action but also loses her dad during the Chitauri invasion. The death of her father and seeing Hawkeye in action is what pushes Kate Bishop to want to pursue archery in order to protect her and her mother.

Hailee Steinfeld commands the screen and owns it as soon as we meet the much older version of Kate Bishop. Making it all that much more understandable as to why Kevin Feige and Marvel Studios fought so hard to cast her as the titular hero. Steinfeld truly understands the character and makes her, her own. And with all that archery skill also comes the smart-mouth side of Bishop who doesn’t back down from anyone or anything no matter how tied up she becomes. All that makes Kate Bishop likable and such a fan favorite Avenger is on full display right from the beginning.

Renner’s Clint Barton isn’t too far behind as we see him in a new light once again, laying low and being more of a family man than he was before. He’s not necessarily leaving his Avenging behind, he’s just trying to make up for lost time given that he lost every single member of his family when Thanos snapped half of all life in the universe away. However, his time spent as Ronin has come back to bite him in the ass albeit unintentionally.

Kate Bishop being the troublemaker that she is is now in possession of Clint’s Ronin suit and unintentionally gets mixed up with the wrong people, those people being the Tracksuit Mafia. Who just so happen to have had crossed paths with Ronin in the past. The series doesn’t shy away from revealing how much of an effect Clint had on the criminal underworld in New York City during his time as Ronin. However, at this point in time, Kate Bishop is the one paying for those mistakes. Until Clint comes to clean up her mess.

These first two episodes make it a point to fully connect it to the broader MCU without feeling like it needed to be a forced explanation. Including Barton’s hearing loss. Which is all an aftereffect of all the explosions and blasts that Barton has had to endure during his time with The Avengers. It’s not as close to the source material but it’s as close as it’ll get for now. As we do not know how much more of his hearing will be lost throughout the course of this series.

“Hawkeye” also manages to deliver some great action pieces and comedic banter between Clint and Kate and most of that comes at the behest of the Tracksuit Mafia who are the epitome of total bros. This is perhaps Marvel Studios’ most accurately adapted group of antagonists from the comics. Which is something to praise because Marvel tends to take a wide scope of creative freedom when adapting their villains and antagonists from the pages to the big and now small screen. More often than not, it doesn’t always work.

However, the Tracksuit Mafia do and are slowly paving the way for something much bigger and probably an entire redemption arc for Clint Barton who unfortunately became a murderer when he took upon the mantle of Ronin after the events of “Avengers: Infinity War”. One thing I am curious to see is how this plays out with Maya Lopez who in the comics was the first person to don the mantle of Ronin prior to Clint. Especially when episode two leaves you with a massive cliffhanger and the first appearance of Maya Lopex played by Alaqua Cox.

Overall, Hawkeye has debuted to a strong start bringing forth a spectacular debut for Hailee Steinfeld’s Kate Bishop and the Tracksuit Mafia, topped with a slow churning mystery that is sure to cause waves across the internet as the story unravels. Most importantly the debut of street-level heroics in the MCU is something that’s been sorely missed since the days of Daredevil, Jessica Jones, and Luke Cage. Truly paving the way for more street-level heroic stories to be told on both Disney Plus and the big screen.

Steinfeld is an absolute gem and is sure to become an immediate fan favorite which I’m sure she’s been since her rumored and official casting. The show’s Christmas setting in New York City is the icing on the cake bringing in a new tone and a new feel to the MCU to coincide with the holiday season. Yeah sure, we have “Iron Man 3” but “Hawkeye” is for sure set to become Marvel’s first certified Christmas classic.

Hawkeye is streaming now on Disney Plus.