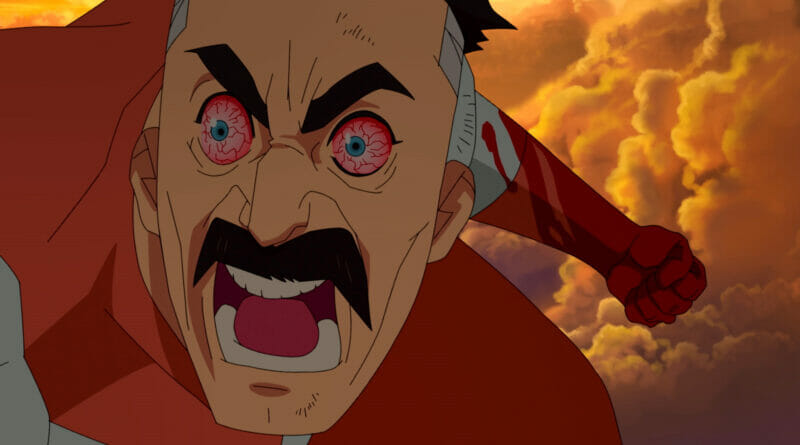 
*THIS ARTICLE CONTAINS SPOILERS FOR INVINCIBLE’S SEASON ONE FINALE*

The finale of Invincible is everything you could ever want from the third act of a superhero movie. It is action-packed, heart-breaking, and it racks up one of the most significant body counts in any superhero-related show or movie that I have ever seen. We are finally given the explanation we have all been waiting to hear: Nolan’s true intentions, as a Zod-like scout looking to conquer the feeble planet Earth, and have it join the Viltrum empire, bowing to the Viltrumites, as many other planets have done.

We are shown the merciless nature of the Kryptonian-like species that desires nothing but supremacy and allegiance, at all costs. Nolan had intended to bend the will of the people of Earth and have them submit to the will of his people. Although we are also shown Nolan’s failures, not in his ability to destroy, but rather in his ability to love. Love seems absent in the minds of Viltrumites, shown as a weakness, something to be tossed aside, in favor of strength.

It is this that drives Nolan to attack his son without second thoughts or any leniency. It is this that adds to world-building that creator Robert Kirkman does so well, not only are their immediate threats but potentially life-altering disasters that could happen at essentially any given moment.

The scene in this episode that resonates in mind the most is seeing Mark’s bloody and beaten face get pummeled repeatedly, to the point of seeing and hearing his teeth ricochet off of the rocks beside him. With Nolan’s hands covered in the blood of his son and the hundreds of people he has just murdered, he embodies pure rage more than any supervillain in recent memory.

Nolan’s ruthlessness is on par with that of The Boys’‘ Homelander, though I would argue that he does not desire, nor need, the affection that Homelander craves. Omni-Man is an entity driven by purpose and is not conflicted by his actions in appearing remorseless, as he has been programmed to kill without hesitation.

The battle between Omni-Man and Invincible takes up much of the episode, and it is a real doozy. There is so much unnecessary death and collateral damage that there is hardly a moment to catch one’s breath. Similar to the battle in Man of Steel, so much death happens by their proximity to the battle.

People are torn to shreds simply for Nolan to prove a point to his son, that people are frail, weak, and inconsequential. It is brutal and devastating to watch as Mark fails to save a single person from his father’s wrath. What is most gut-wrenching is that Nolan kills so many people with Mark’s body, causing him to be the cause of the deaths of so many.

Nolan literally throws Mark through buildings, toppling them and creating a blast wave of such power that countless bystanders are unable to escape. One of the hardest scenes to watch is of Nolan holding Mark up by the neck as a train crashes into them, splattering the passengers into pieces over Mark’s body. The fight itself is so one-sided that it is impossible for Mark to win. He is beaten at every turn, and there is no one to help him. It is during these moments that I am glad that Invincible is an animated series, as any attempt to do half of what this episode shows would never make it to air.

One of the strengths of this episode is the well-established relationship between Mark and Nolan, which ultimately causes the battle to end, and for Nolan to question his actions while essentially stopping amidst an act of filicide. J.K. Simmons is such a tremendous voice actor that you can feel his emotional resonance in his voice, his love, hesitation, and fury all rolled into one. It is these final moments that we are privy to Nolan’s foil, which is ironically his humanity.

In addition to the battle scene, we are given some great scenes with The Guardians of the Globe, finally coming together as a team, in order to help those who have suffered at the hands of Omni-Man. Amber and Mark are reconciled, at least for the time being. Eve, William, and Amber have seemingly formed a support structure for Mark, sharing in his secret. While Debbie finds solace in a bottle with the only other person who is as personally devastated, Art Rosenbaum.

With Invincible recently being picked up for two additional seasons, the end flashes of all the villains and issues that plague Invincible’s future are made all the more exciting. I can’t wait to come back to this show and to love every blood-soaked devastating minute of it.

Invincible is streaming now in its entirety exclusively on Amazon Prime Video.