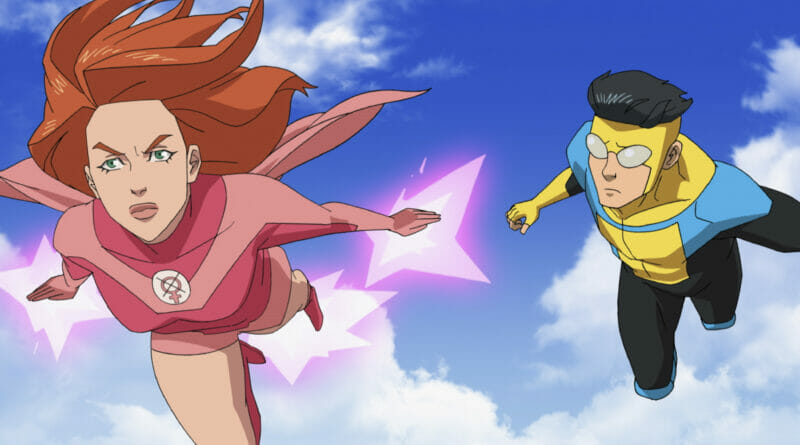 Invincible: Zazie Beetz and Gillian Jacobs On What Separates The New Series From Other Superhero Shows

We are less than 24 hours away from the premiere of Invincible on Amazon Prime Video. As part of our coverage for Invincible, we were invited to the virtual press junket to speak with the main cast and the comic book series creator Robert Kirkman about the series and all the changes that came along with the adaptation. While speaking to Zazie Beetz and Gillian Jacobs who voice Amber Bennett and Samantha Eve Wilkins aka Atom Eve respectively shed light on what separates Invincible as a comic book series from all the other superhero shows we have seen in the past.

The Nerdy Basement: In your personal opinions, what separates Invincible from all the other voice-over work you guys have done in the past? This is a general question that you both can answer.

Zazie Beetz: I think that invincible just as a comic is just very different than a lot of other ones. In this world consequences are real and they follow through throughout the whole story as in with other superhero worlds, different dimensions and stuff can change and revert stories back and I just really liked how it felt, it felt very…it was sort of this heightened kind of world but played out with very normal people.

Like Mark [Grayson] I would say is a very average teenager and there something kind of interesting about that and him grappling with this super element that he has and I was really drawn to the whole story I liked how it dealt with coming of age and how it dealt with family and I was also glad that Robert [Kirkman] was involved with this series as well since he created the comic and you know it made me feel like the throughline in that would go smoothly.

Gillian Jacobs: I’m trying to think of any additional points, um, I mean I’ve done some animated shows that are aimed at an adult audience but not a ton so in that I thought that this very much a show for adults and so that was interesting where it really feels like a one hour drama that just happens to be animated and dealing with superheroes so I really enjoyed that about it.

And as we’ve said in other interviews, the scope and scale of what they’re able to do with the plots of the episodes because it is animated I thought they were really taking advantage of animation as a form and embracing that and using it to their advantage storytelling wise so I really appreciated that and I guess I’ve played a superhero in a one-off episode of other animated shows but this is the first time I’ve gotten to do one that was over the course of multiple episodes so it was also just fun for me as an actor to on the ride.

To say that Invincible takes advantage of animation as a form in order to propel and really heighten the scope and scale of the series as a whole is very telling of what the series does and how much epicness it delivers as each episode progresses. If anything Invincible will make fans of adult animated shows, which also involve superheroes appreciate the medium that much more.

While adult animated shows based on comic books are slowly making a comeback. Hits like DC’s Harley Quinn and now with the Invincible animated series, I think studios will really start keeping an eye out and scope the field to see how fans react to this kind of content to see if this an avenue they would like to take once again.

Most of us grew up watching shows like Justice League the animated series, Batman The Animated Series, Justice League Unlimited, Spider-Man, X-Men, the list goes on. Over the course of time the comic book animated medium took a dip as it transitioned into fully creating live-action adaptations and while other animated shows were made and released over the past decade, none have really stood the test of time compared to its predecessors.

So taking a look at Invincible and is essentially going back to the roots of comic book storytelling in terms of home media entertainment. I think Amazon has a massive hit on their hands and a second season of Invincible is almost a guaranteed announcement as soon as the series premieres on the streaming service.

Make sure to also check back here for our interview with Invincible comic book creator Robert Kirkman and stars Steven Yeun and J.K. Simmons!