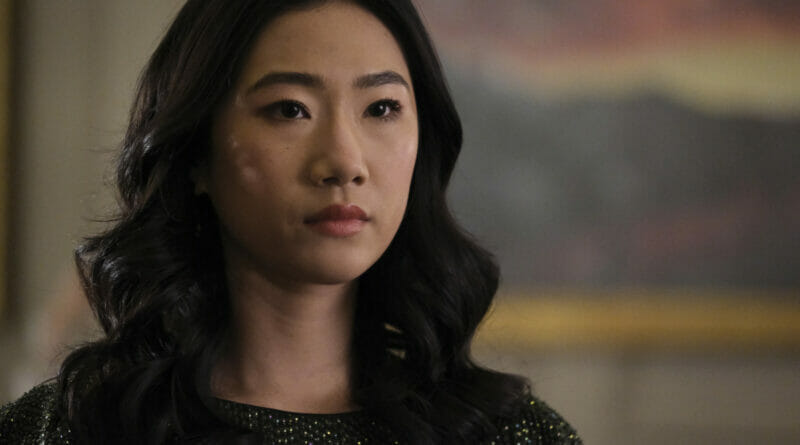 After a very thought-provoking episode last week, Kung Fu brings forth a heist mission for Nicky as she tries to get her hands on the mythical dagger. Unfortunately, things do not go as planned. Kung Fu has not shied away from pulling punches each and every week. Last week’s episode threw some hard hits and this week’s episode is no exception. Nicky has found herself putting together a heist plan in order to retrieve the dagger she is looking for but Henry is not too keen on Nicky’s heist plans. Henry tries to deter Nicky from her almost reckless plan but she is as determined as she’s ever been.

One of the new subplots of the series has been Althea’s sexual abuse storyline which has not shied away from showcasing how a woman contemplates and deals with whether or not she wants to come out with the truth or let it eat her up inside. While she’s been teetering back and forth about her decision, she is now met with a shocking ultimatum. Sign an NDA with a $300K compensation or speak out and risk her fiance’s parents going down along with her boss as they were huge investors in his startup.

As a man watching this series and seeing this huge wave of women coming forth an revealing their abusers after so many years, I cannot fathom how much of a personal conflict this must be for a victim going through this and Althea showcases that very well. It’s highlighted in her body language, her facial expressions and her chilling silence, and sense of unease whenever that topic is brought up along with the name of her boss. But ultimately it her resilience throughout these past few episodes that’s really stuck with me.

While I am a bit conflicted about her decision to ultimately sign the NDA and accept the payment. I understand the self-sacrifice in order to preserve the legacy of her fiance’s family. Which looking at it in hindsight, says a lot about Althea’s character and her deep love for not only her future husband but his family as well. Of course, the easy way out would’ve been to come out and publicly accuse her abuser but that would’ve had a domino effect that would’ve affected her fiance, her in-laws, and ultimately herself more than it already has now.

Additionally, what makes it such a strong move is that not did she “accept” said payment, she forces her boss’s attorney to up the payment to $500K and also makes the check payable to the hospital her in-laws have been funding. It’s a real power move that I can’t help to admire. But my conflict comes with wanting to see her abuser pay for his wrongdoings and not so much her decision.

Kung Fu’s biggest plot point is Nicky’s quest to gather all the mythical weapons before Zhilan. One part of this plot thread that I have become a bit annoyed with is the need to have Nicky’s ex in the middle of it all in someway, shape or form and the need to have that former-lover tension between them when they have both moved on with other people. I understand he’s a resource for her and while she’s not making herself available to him neither physically nor emotionally. It’s the “I don’t want to see her with another man” energy that’s not doing it for me.

I get it. He’s moved on but he’s jaded. Nicky left him in order to live in China for a few years and he decides to move with someone else. Seems like a you problem at this point. You’re not entitled to any sort of explanations. Especially when you’re out on a date with your new girlfriend.

I can see this whole love square getting a bit messy and getting in the way of both Nicky and Evan’s respective new relationships. What I am really hoping for is that they don’t do the cliche thing and have them intentionally but unintentionally hurt the new person they are with due to unresolved feelings.

However, Nicky manages to get her hands on the dagger she’s been trying to get ahold of until she runs into Zhilan who is now speaking with her father Jin. Obviously this poses a huge threat to Nicky as Zhilan now has direct access to her family. Jin inviting Zhilan to the family restaurant just makes them even bigger targets and opens the door wide open for Zhilan to attack the family directly if she so chooses.

I have to take a moment to really show my admiration to Yvonne Chapman who plays Zhilan. She absolutely chews up every scene she is in. She just has this aura that and presence that forces you to keep your eyes locked in and she comes off as such a huge menace to Nicky whenever they are sharing scenes. To Olivia Liang’s credit (Nicky) she helps enhance Chapman’s presence in those scenes with simple acting and those nuanced facial expressions and her nuanced body language.

After her one-on-one with Nicky, Zhilan steals the dagger from Nicky. After revealing to that to Henry, Nicky wants to go after Zhilan in order to get the dagger back. Henry tries to deter again but as she’s been doing throughout the series so far, she goes in sort of blind and without a plan. She engages in an equally beautiful and graceful fight sequence with Zhilan which is always a pleasure to watch in this series; and learns some rather hard truths (or so we think) about her Shifu Pei Ling.

Other than cementing the fact that Pei Ling is her sister, Zhilan reveals to Nicky that her Shifu was also a murderer and ran away to that monastery in order to hide away from justice and not pay for the crime of killing their father and stealing the sword Zhilan stole from her after killing her in the pilot. Nicky is not so quick to believe her but I think this new information will spark an even bigger sense of doubt in Nicky. Not just about herself but also about her Shifu.

Nicky looks up to her Shifu and that admiration she has for Pei Ling is her driving force so learning something like this would be very detrimental in how Nicky operates going further. As Zhilan said to Nicky, she is full of rage and it has made her blind. And as much as we don’t want Zhilan to be right…she kind of is right.

This week’s episode of Kung Fu ends on a bit of a cliffhanger after Zhilan knocks Nicky unconscious. But it’s almost needless to say that Kung Fu has improved each and every week as the season progresses. Despite my nitpick in how formulaic the episodes are and by that I mean, Nicky has a plan, plan doesn’t go right, we must find an alternative, then we spend the last 10-15 minutes in a fight and revealing new information to set up more plot thread for the rest of season; is a bit repetitive but despite that, each episode holds up week in and week out.

Kung Fu is streaming now on The CW app or CWTV.com for free. Catch new episodes of Kung Fu each and every Wednesday night on The CW at 8 pm ET.