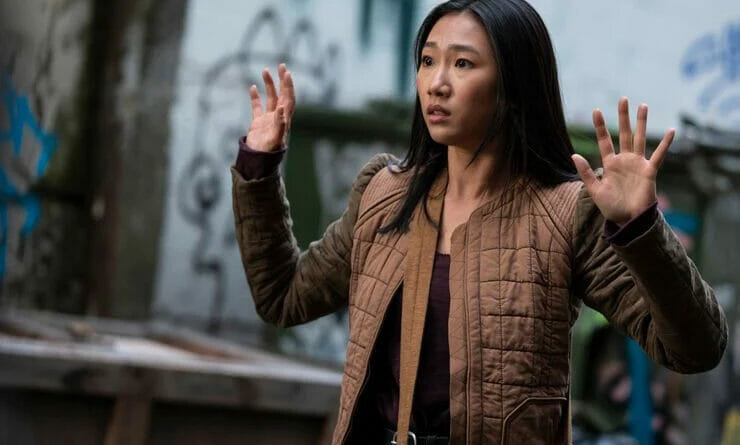 
Nicky looks to settle down now that she’s back home, but a new problem arises in this week’s episode of Kung Fu

Previously on Kung Fu, which marked the debut of the new CW reboot, we were introduced to Nicky Shen who had dropped out of college and had moved to China and settled there for three years studying and training to become a Shaolin Warrior. After her Shifu is killed, Nicky confronts her Shifu’s killer but almost gets herself killed. Having nowhere to go, Nicky heads back home to San Francisco.

After learning about Tony Kang’s overtaking of San Francisco’s Chinatown and the debut her parents owe to him. Nicky and her siblings task themselves with hunting down Tony Kang in order to save her parents, relieve their debt and save their restaurant. Nicky also seeks further information of her Shifu’s killer Zhilan who is currently in possession of one of the eight mythical weapons.

This week, Kung Fu episode two titled ‘Silence’ kicks off with Nicky’s family fully embracing her return and catering to her presence. Here’s Nicky informs her mother that she is dropping out of law school after her mother informs her of an internship opportunity at a local law firm. We get a quick flashback to the night Nicky’s Shifu was killed but this time around Nicky is slain by Zhilan; which causes Nicky to wake up and let us know that this serendipitous moment turned dark was simply a nightmare.

A good chunk of this episode focuses on some of Althea’s wedding preparations and Ryan wanting Nicky to convince their father Jin to visit the clinic for his yearly checkup, which unbeknownst to Nicky he has been continuously refusing since she left for China. Nicky in a moment of meditation recalls her fight with Zhilan and realizes that Zhilan had a pendant attached to the neckless she was wearing. Nicky draws a sketch of it and presents it to Henry who agreed to help her with finding more information about Zhilan and her connection to Pei-Ling.

While Nicky is out with her sister Althea trying on bridesmaids’ dresses, Althea receives a mysterious phone call. Trying to deflect Nicky’s questions about the phone call she tries to convince Nicky to wear a different dress so she’s not outshining her at her own wedding. Here is when Althea learns about Nicky’s scar which she received at the hands of Zhilan.

I’ve been having a very personal gripe with the way the scar is presented in comparison to how Nicky actually got it. This might seem like a very minor nitpick but the scar isn’t in the angle in which Nicky received it. Whenever the series goes back to that moment and shows us how Nicky got her scar and then comes back to the present moment and it isn’t aligned correctly it becomes extremely bothersome to me. It’s something minor but attention to detail goes a long way. I digress. Nicky informs Althea about the scar and how she got it and how she is hunting down Zhilan. Something Althea secretly informs her younger brother Ryan about.

Nicky’s parents Jin and Mei-Li have been rather mixed with each other when it comes to how they feel about Nicky’s return. While her father Jin is more than happy that she is back, her mother, Mei-Li is being rather hesitant about welcoming her with open arms in fear that she might leave the family again. So she urges Jin not to get his hopes up.

Later we see Nicky at a park practicing her Tai-Chi when she suddenly has to stop a man from attacking a young girl. After fighting the man and disarming him, the young girl makes away with the man’s gun but leaves her wallet behind. Looking to help this young girl Nicky asks her ex to help out since he’s the local District Attorney. He informs Nicky that the young girl could be brought into custody for illegal possession of a firearm.

We learn that the young girl is named Ronda and she’s homeless due to her mother’s boyfriend, Derek, kicking her out of the house after she called him out for stealing from her mother. Ronda additionally informs Nicky about Derek and how they found themselves in the situation they are in and how she is trying to do everything in her to convince her mother to leave Derek so she can return home and in the process stop Derek’s abuse and thievery.

Heeding her brother and sister’s advice, Nicky uses her pre-law skills to use in order to get Ronda and her mother out of Derek’s house and into a transitional home for in-need families. When Nicky and Ronda arrive at her apartment they encounter Derek who arrived early. Nicky urges Derek to leave Ronda and Carmen alone and that restraining order has been put into place, this will allow Ronda and Carmen to get their belongings together and leave Derek’s apartment. Things don’t go well as Derek proceeds to drain all of Carmen’s accounts in order to go gambling thus leaving Carmen broke.

Nicky eventually returns home to find her father asleep on the couch after waiting for her to return home in order to finish their game of Chinese checkers; a game they were playing three years ago but never finished due to Nicky leaving for China. Nicky’s mother confronts her about leaving her dad waiting and ultimately questions her about why she returned home.

Mei-Li tells it like it is as any mother would and tells Nicky that she’s been telling her father not to keep his hopes up about her. Telling her that she knows that she will leave again and that she knows exactly why she returned home. Not because Nicky wanted to return home but rather it was simply due to the fact that Nicky had nowhere else to go. Which Nicky confirms as the reasoning behind her returning home.

Throughout these first two episodes but most specifically this week’s episode, Nicky has been showing her struggle with adjusting to life back home while also trying to ignore her grievance towards Shifu’s death. After finding Derek and kicking some ass, Nicky gets Carmen’s money back and returns home. She has a moment of meditation in which she speaks to Pei-Ling and informs her that she is finally coming to terms with her death and that helping Ronda helped her with overcoming her sense of grief.

The next day Nicky and her father Jin start a new game of checkers, using the fresh checkerboard as a metaphor for a fresh start and a clean new slate while also reassuring her father that she is here to stay this time around. Nicky meets with Henry once again who now has new information about Zhilan’s pendant and the meaning behind it.

Henry reveals to Nicky that her Shifu Pei-Ling and Zhilan are sisters and that they are both a part of the Guardians Families. Henry informs Nicky about Winston Chau who has spent his entire professional life studying the Guardian Family and the eight mystical weapons they once possessed. Nicky wants to speak to the professor to learn more about the Guardian Family but is told that the professor is currently in Singapore. Being informed by her ex that Zhilan has been pinged in Singapore Nicky and Henry fear the worst.

Overall this week’s episode of Kung Fu was rather slow but solid and also set in motion a lot of what’s to come as we progress throughout the season. Some highs and some lows in terms of watchability but still worth the watch.

Kung Fu airs every Wednesday night at 8 PM ET on The CW and streams free the next day on The CW app.