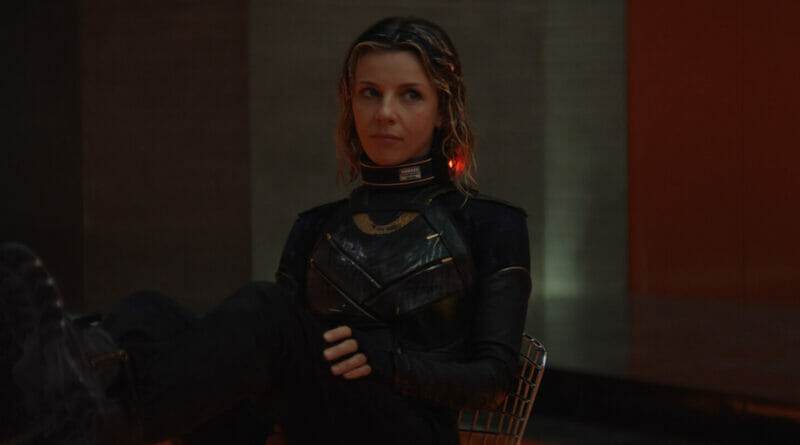 Loki Episode 4 The Nexus Event- What Makes Loki a Loki? Being a Survivor That’s What!


Wow (Owen Wilson voice)! Oh boy did we receive a treat with episode four of Loki! Warning: Spoilers Ahead For Loki Episode 4 – The Nexus Event

It was a great episode for Loki this week. The episode really opened this story up and set up the final two episodes for some really great things. I did not think we would get to this point so quickly but clearly, there are bigger things at play here. There is a ton to unpack in this episode so I’m going to get right into it.

After a slower-paced episode last week, episode four definitely made up for it and picks up with a flashback of Sylvie as a young girl (played by Cailey Fleming) as she is playing with some toys in Asgard. You may recognize this young actress from both The Walking Dead where she plays Judith and Star Wars the Force Awakens where she plays young Rey. Nice resume so far.

We then see the TVA show up with no rhyme or reason other than “breaking the sacred timeline” and stealing a young girl from her life and her reality. We briefly get a glimpse at the infamous Time Keepers when Ravonna Renslayer goes to visit them and they seem like the real deal but more on that later.

We then pick up with the end of last week’s episode where Loki and Sylvie are facing an intimate death on Lamentis 1. We get a beautiful conversation here between the two as Sylvie pretty much explains the opening scene to Loki and her reason as to why she has been targeting the TVA. The two talk about what makes a Loki a Loki. Losing? Perhaps but the most important takeaway here is surviving.

A nice metaphor for everyone to keep on keeping on. That’s what Loki does, he survives. Sylvie explains here that she was on the run causing Nexus Events for a while until she was able to hide out somewhere at the end of worlds where she grew up. It was not until she was ready and what we assume to be years later that she then targeted the TVA. We pretty much get a clear-cut answer here that the TVA is not what they appear to be and needs to be stopped. The most compelling part of this conversation was Loki’s response.

He was in awe of her and although we saw him slightly falling for her last episode it is clear in this instance he indeed has. The two then comfort and hold one another and boom we get an apparent never before seen enormous branch in reality and another Nexus Event. The TVA at the very last minute detects this and scoops them up and brings them back to the TVA.

Loki and Sylvie are then split up and Mobius decides to punish Loki but not before Loki gets in a few words. Loki tells Mobius that the TVA is lying to him. He does not buy it and goes forward with the punishment by placing him in an endless memory loop with the one and Only LADY SIF! Yes, we finally see the return of Jaimie Alexander and unfortunately, it was in one of my most hated scenes of the show!

It’s a specific memory from when Loki messed around with Sif too much and cut some of her hair so then she of course physically gets him back in a very specific way. It was great to see her again but not in this fashion. For me, this scene might be brilliant or it might be terrible. I can’t figure it out.

The constant loop was very annoying and it seems to beat you over the head with it. I found myself literally screaming at Loki to do something different. He of course does something different eventually but it took a little too long for my liking. But then again maybe the point was for us to feel what Loki was feeling which I think I definitely did.

After trying to plead with Ravonna to allow him to integrate Sylvie and failing, Mobius passes by where Sylvie is being kept and exchanges small talk with Hunter B-15 and mentions how they have brought in Kree, Titans, and Vampires. We got it, folks! Our first mention of vampires in the MCU! A nice subtle hint and easter egg that Blade is coming and so much more. Mobius pulls Loki out to finally talk.

Since being reunited you can tell they both feel betrayed by one another and deep down I think they both truly care. It is then confirmed by Mobius himself that Loki has fallen for his female self aka Sylvie which Mobius is appalled by. Mobius says to Loki and I quote “forming this kind of sick twisted romantic relationship, that’s pure chaos, that could break reality”.

This is a hint at what and how the Nexus Event on Lamentis-1occurred. It appears two powerful beings who are one and the same even from different realities falling into some sort of a relationship with one another can cause a catastrophic Nexus Event and in this case, it’s Sylvie and Loki. Loki spills the tea to Mobius that they are all variants and tries to tell him something is wrong here but Mobius does not buy it just yet. We then go to a celebration meeting of sorts between Mobius and Ravonna.

Now, something has and seems very off with Ravonna and this scene only increased my curiosity. Loki’s comment clearly got to Mobius and he proceeds to question a few things which raise Ravonna’s eyebrows. Mobius swiftly exchanges his temp pack with Ravonna to receive some answers when she is not looking. What’s interesting to me about this scene is that Ravonna seems to be putting on an act herself. The way she responds and her reasonings for some things again seem off.

We then go to Hunter B-15 who has been affected by Sylvie’s enchantment. It’s mentioned that she cannot plant memories and can only help remember actual ones. B-15 demands to see Sylvie to find some answers. Sure enough, after meeting with Sylvie she gets them. Mobius then looks at some footage on Ravonna’s temp pad and sees Hunter C-20 who had vanished explaining the truth to Ravonna and she too like B-15 remembers her past, however, C-20 was not so lucky. This lights a fire in Mobius who comes back to Loki and tells him he is right. Ravonna and a handful of TVA agents intercept them and sadly Mobius is pruned aka deleted from existence.

I gasped at this in a dramatic fashion, they literally just killed one of the main characters off in seconds, or did they? Loki and Sylvie are brought in front of the Time-Keepers that are hanging out in this epic chamber and we see these three in the flesh, well sort of!

They say some words and Hunter B-15 comes to the rescue freeing the two variants who then proceed to take down the agents. Sylvie finally gets her chance and throws her short sword right at one of them and takes off one of their heads. And in a Wizard of Oz-esque fashion, it is revealed that they are nothing but mindless androids who have no actual power whatsoever.

We wrap up this episode with Sylvie and Loki asking the same question: who created the TVA? This prompts Loki to what appears to be him confessing his love to Sylvie and right when he was about to Loki himself gets pruned by Ravonna. This was not as crazy as a moment when Mobius was pruned because there’s no way they kill Loki off yet AGAIN. I know something must be up and if you stayed around for the credits then you know what happens exactly. Loki wakes up in what looks like a post-apocalyptic NYC to what looks like three other Lokis.

We have a classic type (comic book accurate) Loki played by Richard E. Grant, Kid Loki played by Jack Veal (more Young Avengers setup), and a third Loki who I am not entirely sure of. Besides the Sif scenes, this was a great episode that set up the final perfectly. The biggest question still remains once again for not just Sylvie and Loki but for us the audience! Who created and is controlling the TVA?

My guess at this point is definitely Mephisto. Totally kidding but who can be the big bad? Is it Ms. Minutes or Ravonna? Both? Did Ravonna know about the fake Time Keepers? So many questions still, with some answered. I did get Kang the Conqueror type feelings and perhaps whoever this villain is, they work for Kang. Only time will tell. No pun intended.