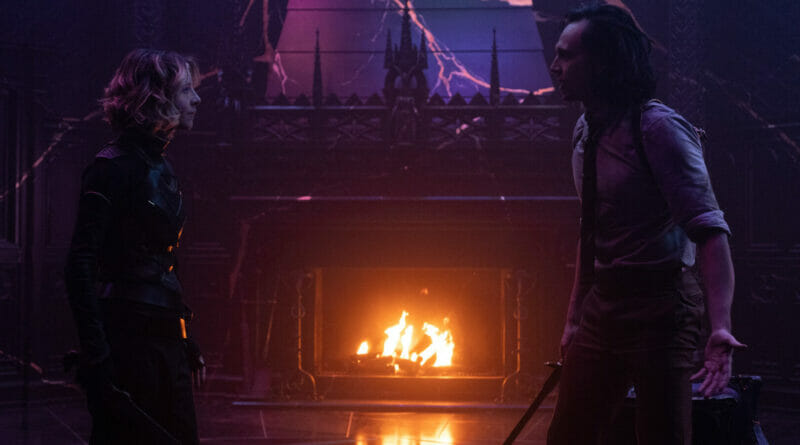 What can I say besides yes, just yes! I think I stand for us all by saying the Loki Episode 6 delivered! We have so much to unpack with so many reveals that we need to get into it right away. First and foremost, I will say this was probably my favorite episode of the series. I will tell you why. It was straightforward and self-contained (sort of) and yet it gave us the MCU expansion storyline we had been waiting for. I also might be biased due to a certain character’s guest appearance, but more on that later. This episode challenged us as viewers on whether we are ready for what’s about to come in Phase 4 of the MCU.

Even as a finale it was a huge setup for all the future projects to come and I can honestly say I am so excited. Just when you thought Marvel might have come to a dead-end after Phase 3, Kevin Fiege said, “hold my beer.” And oh boy did I hold his beer! Not only did we get a setup for Antman and The Wasp Quantumania, but we also got a huge setup for Dr. Strange in the Multiverse of Madness, Spider-Man: No Way Home, and yes, the unannounced Avengers 5 and many more. Let’s have some fun and get into it!

I want to start off by talking about the cliché Avengers reel that had a unique tone to it. That tone including voiceovers from our former Captain America Steve Rogers, our new Captain America Sam Wilson, Hope aka The Wasp, Scott Lang aka Ant-Man, Hank Pym, Starlord, Captain Marvel, Loki himself, and my personal favorite Korg. Shout out to him and Deadpool for their awesome promo and pretty much confirming Deadpool will soon be part of the MCU.

As cool as this was, the most important part of this opening was famous quotes from some of our recent history civil activists. This opening features Neil Armstrong, and some very wise young women such as Greta Thunberg, Malala Yousafzai, and the great and powerful Nelson Mandela.

We also literally get one of my favorite quotes from within the MCU, and coincidently it’s from Vision in the recent Wandavision. The quote, “What is grief if not love persevering”. Simply beautiful. Following that, we get another voice-over from one of our most beloved humans in history Maya Angelo. Why did they include these incredible individuals? Because the theme of this series and this episode is our free will. Our free will to be who we are, do what we think is right, and ultimately choosing our own path. It appears this was not the case with our past MCU characters.

Loki and Sylvie arrive at what is described as the Citadel At the End of Time, where our big bad is revealed. Who is the big bad? Well, it appears to be a variant of the one and only Kang the Conqueror but in this series, he is known as He Who Remains. We have mentioned him in past reviews speculating he could be the man behind the curtain, and sure enough, he was! Sylvie then must take her time before she enters the beauty and the beast look-alike castle. As she enters the castle, you can see here how much Loki and her know one another.

Maybe because they are one and the same, or maybe because they are in love? Sylvie and Loki walk into the castle and the first thing I realized was the crazy streaks of lightning that are very relevant to the castle. They encounter Miss Minutes who explains that “he” has been watching and has a solution to their quest. The solution, well let’s just say the MCU starting from the first Avengers would be very different. Imagine Loki won, then somehow got his hands on the Infinity Gauntlet and killed Thanos? Crazy to think about, but it’s possible according to Miss Minutes.

Back to the TVA where Renslayer is looking through files and encounters Miss Minutes, who has some of the information she was looking for. This is interesting because it confirms Renslayer does not know who is behind it all and in the comics, she is Kang the Conquer’s main love interest, but I’m sure they are going to explore that in future movies.

And we finally get to our big bad and to be honest it’s like the MCU finally paid off their Disney Plus villain reveals. Agatha Harkness was good but the groundwork was truly laid out for Mephisto. As we approach the lair of the man behind the curtain there are three statues that look like the Time-Keepers with a fourth one crashed on the floor.

And just an observation here I noticed the introduction music was very similar to the introduction of Negan from The Walking Dead. We are introduced to He Who Remains played by Jonathan Majors. And so, the back-and-forth banter begins, and at first, I was a bit confused about where he was getting at, but I think I can explain here.

We get a look at Majors’ incredible acting abilities. He’s charismatic, confident, and funny. Of course, Loki and Sylvie give it a go at killing him, but that seems impossible as he has a TemPad on steroids and knows exactly what will happen when it’s going to happen.

Speaking of his TemPad it had the same lightning streaks that I had mentioned were running through his castle, he explains that eons ago long before the TVA a variant of himself lived on Earth in the 31st century. And it just so happened that he was a scientist who realized that there are many other universes besides our own. He explains that other variants were simultaneously learning the same thing.

At first, there was peace and shared knowledge but eventually a few bad eggs as there always is made it difficult and soon enough the multiversal wars that were mentioned earlier in the season began. He Who Remains was the variant who tamed Alioth (the epic smoke beast from last week) and was able to then end the multiverse wars to keep the sacred timeline intact, and thus created the TVA. He says “without the mission everything burns”. And there we go, we got our villain’s motivation.

He very literally controlled all of existence to a certain extent since the end of this war up until where we are right now. However, we get to a moment where he no longer has control. Meanwhile back at the TVA, we say goodbye to Renslayer who has some new knowledge of the timeline. Both her and Mobius have a discussion about free will and she has an interesting outlook on it. She presented the idea that maybe the person who created the TVA deserves free will but that sounds like a dictatorship to me on the highest level.

It’s here Loki and Sylvie are presented with two options. One option being they both take over He Who Remain’s position and control the sacred timeline while overseeing the TVA; or two, they kill him and break the sacred timeline while also unleashing all the Kang variants he was keeping at bay. With a disagreement in what they should do we get an excellent exchange of powers between Sylvie and Loki as they begin to fight. Sylvie falls back into not trusting Loki as he is not sure if they should kill him and making it look like he may “want the throne”.

I appreciated this part because the show did not forget what it was called and even though things seemed peachy with Sylvie and Loki at the end of the day they are both still Lokis. Sylvie and Loki clearly care for one another and appears we really might have a redeemable Loki. Sylvie does what she feels is best and kills He Who Remains but not without a sly gesture by telling Sylvie “I will see you soon”.

And that we will as Jonathan Majors is confirmed to appear as Kang the Conqueror in Ant-Man and The Wasp: Quantamania but we may even see him sooner. Sylvie had teleported Loki to what looks like our TVA but we soon find out he is in a new TVA within a new branch. The visuals of the branch timelines being created were phenomenal and this show just kept elevating with each episode.

What an incredible ending and with a surprise guest in Jonathan Majors who stole the episode. This show single handily set up many future MCU projects and let’s just say Dr. Strange has his hands FULL with the multiverse opening up. We get a setup for a huge multiverse war with Kang the Conquerer lurking in the background. I am very excited to see where it goes from here.

We even got a small post-credit that Loki will return in season 2. I was surprised they renewed the show immediately, but it seems Marvel knew it was going to be a huge success. I feel we are all in for a treat with the movie crossovers we are about to get and now it all makes sense. Everyone including the variants from other timelines will have their free will, or will they? And at what cost? We will see!