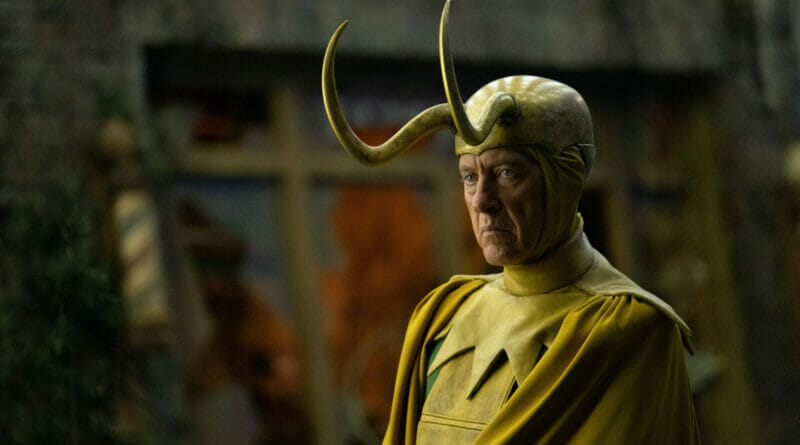 This week’s episode of Loki was truly a spectacle. And was filled with an abundance of Marvel Comics and MCU Easter Eggs and references. We’re gonna take a look at some of our favorite ones and explain what those references were and how they connect to Marvel Comics and the broader MCU. Whether it was the heads of the statue of the Living Tribunal or Throg himself. Let’s count down our favorite Easter Eggs and references.

During the final moments of this week’s episode, Loki and Sylvie go on to attack Alioth in an attempt to enchant him and move him away from the end of The Void to reveal who is truly behind the TVA. As Loki and Sylvie look on and await a new branched reality to happen (which doesn’t), Sylvie suggests causing a distraction that doesn’t go quite as planned. As Classic Loki causes the real distraction by conjuring up Asgard, in the background in which Loki and Sylvie stand we see the beheaded head of The Livin Tribunal.

This episode makes it a point to focus on the faces on The Living Tribunal which just like its comic book counterpart are covered in a cloth. While the colors of the heads aren’t shown in gold nor is the cloth that covers them shown in their purple colors, seeing two faces (with the third buried in the ground) covered in a cloth makes the look distinct and rather unique to the only cosmic being in the Marvel Universe to have it, which is none other than The Living Tribunal.

Who is The Living Tribunal?

If you were like me and many others who were watching Loki this week and heard the name Alioth, you probably asked yourself “who tf is Alioth”? Don’t worry we got you covered, it what we do around here. As for Alioth, that’s another Marvel Comics character with ties to none other than Kang the Conqueror. While his appearance may have turned folks off and reminded them of the gas cloud Galactus was turned into when he appeared in Fantastic Four: Rise of the Silver Surfer, don’t fret, that’s how Alioth actually looks in the comics.

Alioth just how Boastful Loki mentions in this episode is a Temporal Limbo that consumes all matter and energy that enters The Void. It’s very similar to what Alioth does in the comics without necessarily preventing Kang the Conqueror from expanding his personal Temporal Limbo. Needless to say, Alioth is a being that Kang the Conqueror truly fears, and the way he is presented in this week’s episode of Loki, he can either be the guard dog Sylvie presumes he is to be or he could be the very thing keeping Kang the Conqueror at bay…for now…

Throughout The Void see a number of artifacts from throughout the MCU’s history. One prominent one is Red Skull’s Escape Vehicles which we last saw during the final act of Captain America. This leads us to our next massive Easter Egg that was almost too hard to not miss.

The Pyramids of Giza are one of the biggest nods to Chronopolis, home of Kang the Conqueror. Geez, I keep mentioning Kang in this piece but it’s totally unintentional. At the same time, Marvel wants us to do this as Kang is indeed coming. Anyways, The Pyramids of Giza are often seen in Chronopolis, as part of Kang the Conqueror’s prize collection. The pyramids alone give more credence that The Void is actually a veil for Chronopolis so no one can actually invade it.

What if, Kang instead of fearing Alioth (and I know I mentioned this above when talking about Alioth), is in fact in control of Alioth just like Sylvie presumed. Hence why she was able to see a glimpse into what’s past The Void when Alioth first touched her?

4. The Void – Chronopolis: Home of Kang the Conqueror

There’s a lot of theories when it comes to Kang the Conqueror and the big one being that his homeworld Chronopolis in the small city seen in the Quantum Realm in Ant-Man and The Wasp (2018). I personally today’s episode of Loki adds a little more credence to that theory for the simple fact that when Sylvie was touched by Alioth and got a glimpse of what Alioth is essentially guarding. What she saw was in fact the Microverse or what is now known as the Quantum Realm in the MCU.

Not only did this vision have the same colors and hue of the Quantum Realm as seen in Ant-Man and The Wasp. We see everything grow in size just as fast as the scenes kept flashing. This could also be a metaphor, at least a visual one at how “time works differently here at the TVA” or rather Chronopolis aka The Quantum Realm.

3. President Loki and The Origins of the Other Lokis

This week we got Loki overload with the full introduction of Classic Loki, Kid Loki, Boastful Loki, Alligator Loki, President Loki, and his army of Lokis. With the inclusion of these Loki variants, we also learn more about their origins or rather the Nexus Events that caused their pruning. President Loki is simply a nod to the comic book storyline ‘Vote Loki’ a four-issue miniseries and satire of the 2016 Presidental Election. I think the only disappointing part of seeing President Loki is the fact that he’s a variant rather than our own Loki taking over whatever timeline he’s from.

And just like that, we have the official live-action debut of Throg. Throg or Simon Walterson first debuted in Marvel Comics in 2009 in ‘Lockjaw and the Pet Avengers #1’. Simon Walterson was a college football player until a knee injury ended his football career. After the death of his wife and unborn child, Walterson fell into a deep depression and eventually found a witch with a connection to the afterlife. Unable to pay the witch for her services, Simon Walterson is then turned into a frog.

Throg gains the power of Thor when he lifts a piece of Mjolnir which was broken off by Toothgnasher. In turn, this piece of silver turns into a miniature version of Mjolnir later dubbed Frogjolnir. Throg gains all of Thor’s powers thus becoming The Frog of Thunder. Despite his amphibian state, Walterson is able to maintain his human memories and strength all while wielding the powers of Thor but is unable to communicate with humans. As part of the Pet Avengers, Throg and the rest of the Pet Avengers are able to communicate with each other via a telepathic link courtesy of the Mind Gem.

This is probably the biggest meme-worthy Easter Egg in MCU history. While Thanos has used his copter less than a handful of times in the comics. Seeing that in some bizarre timeline Thanos indeed used the Thanos Copter is something truly great and a great job on Marvel Studios’ behalf to include that in this week’s episode of Loki. Will we see a timeline in which Thanos actually flies around in his infamous copter? Probably not, but I’d be lying if I said I did not want to see that. I totally do!

Did we miss anything? What were some of your favorite Easter Eggs and references from this week’s episode of Loki? Let us know!