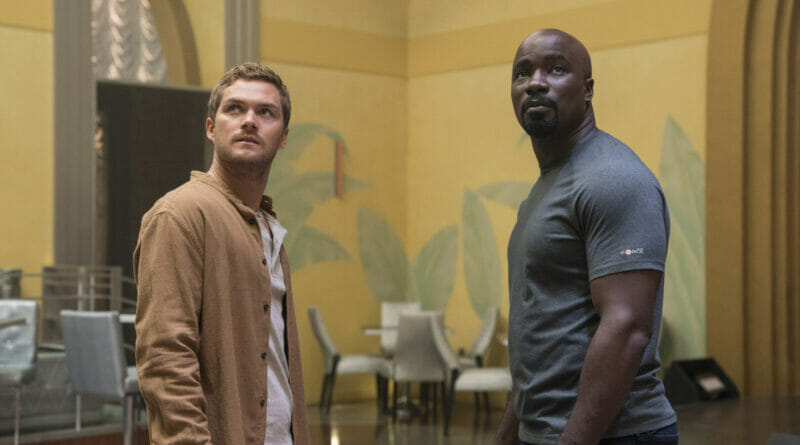 According to a new rumor report from That Hashtag Show, Luke Cage and Iron Fist stars Mike Colter and Finn Jones will be recast in Marvel Studios’ ‘Heroes For Hire’ Disney Plus series. Now I usually tend to dismiss these kinds of rumors based on the outlets who provide said reports because no one really backs them. Whether it’s another fan outlet or an actual Hollywood trade if it’s not reported by anyone else I tend to look away until more concrete news comes to light.

When it comes to this piece of news, it’s a rather interesting rumor that whether or not comes to light anyone should keep an eye on it. Earlier this week, Luke Cage star Mike Colter revealed what he wanted to see in upcoming seasons of the Netflix series he starred in if it did not get canceled.

“It didn’t give me a chance to have any closure. There were so many places we could have taken it,” “There’s obviously the Alias series where Jessica and Luke had a child and had this adult life they were trying to live, and there’s this moment where they are working out their blue-collar, making ends meet life together, which is very interesting,”

“There’s the journey that Luke had in his own series with Harlem’s Paradise, where he’s taken over the club and is he gonna be a bad guy or a guy that is on the other side of the law, and who’s gonna stop him. That was another interesting thing to watch, with him maybe being a little gangster, and that would’ve been cool too.”

When it comes to Luke Cage’s Netflix series, many fans were left rather disappointed with how the character was handled and how his relationship with Jessica Jones never fully developed into the family dynamic it turned out to be in the comic books, which is something, Mike Colter mentions in his interview with Collider. Not only that but the appearance of Danny Rand in Luke Cage season two, giving us a glimpse of what the titular heroes might look like onscreen in a potential Heroes For Hire series.

Obviously, that didn’t see the light of day as all the Netflix Marvel shows were canceled. This leads us to the rumor that’s brewing in regards to Mike Colter and Finn Jones as Luke Cage and Iron Fist respectively.

Luke Cage and Iron Fist Recast and Why?

According to That Hashtag Show, Marvel Studios are looking to recast Mike Colter and Finn Jones for very specific reasons. When it comes to Finn Jones, the negativity surrounding his portrayal of Danny Rand/Iron Fist has had too much of an impact on how the actor is viewed so keeping him around would have a more negative effect on the character of Iron Fist rather than a positive one.

However, when it comes to Mike Colter, bringing him back as Luke Cage was indeed considered and he reportedly met with Marvel Studios about it. According to this same report, those talks ultimately didn’t work out because Colter and Marvel Studios felt that having Colter perform alongside another actor portraying Danny Rand wouldn’t quite work.

Now we can take this all with a grain of Pink Himalayan Salt as nothing is outright confirmed but we have had various rumors and reports over the past couple of years that have stated that Kevin Feige while didn’t want the Netflix shows connected to the broader MCU he created, he was keen on bringing back the leading stars of their respective Netflix shows for a rebooted version of them in the MCU.

I reiterate that none of this has been confirmed or announced/revealed by Kevin Feige himself or any other Hollywood trade or Hollywood insider. But when looking ahead at Spider-Man: No Way Home and the return of Charlie Cox as Matt Murdock/Daredevil there could be some sort of credence in this long-winded rumor report.

Would we love to see the entirety of the Netflix Marvel cast return? Sure, why not? With the Multiverse of Madness coming our way and with previous Spider-Men and Spider-Man villains heading to the MCU anything is possible, even the aforementioned recasts or simply a version of them from a different timeline that will eventually become canon to the MCU. Either way, all we can do is wait and see how things play out.

As I said before, I usually turn a blind eye to rumors like this but I thought it was a fun one to report and give my two cents on it based on what’s known about Phase 4 of the MCU and what the Disney Plus shows have set up and what’s to come with Doctor Strange in the Multiverse of Madness and Spider-Man: No Way Home.