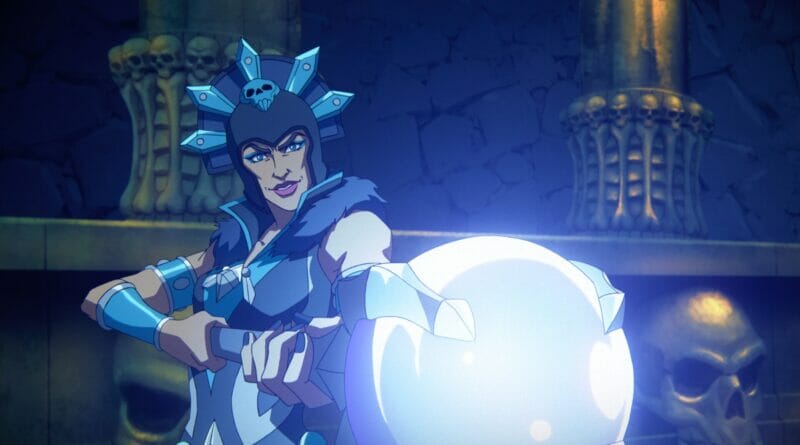 
*WARNING SPOILERS FOR MASTERS OF THE UNIVERSE REVELATION PART 2 AHEAD*

Kevin Smith’s “Masters of the Universe: Revelation” Part 2 is back and comes in guns blazing right from the start. Picking right up from where “Masters of the Universe: Revelation” Part 1 left off. Skeletor, now having the Power of Grayskull wreaks havoc upon Eternia by turning all of Eternia’s people and the deceased into a horde of soulless zombies. Despite the Sorceress’s best efforts, Prince Adam, Teela, and the rest of the group are run up against a wall.

One thing that immediately stands out about this new season is the action…epic, hard-hitting action. It’s probably the most action we’ve gotten throughout the entirety of this series up until this point. We had our action pieces in “Masters of the Universe: Revelation” Part 1, but Part 2 definitely turns the dial to 11 and often times exceeds it. What makes it all that the more enjoyable is Powerhouse’s animation which complements everything in this new series so so well. There’s a beautiful aesthetic that is a staple look and feel for Powerhouse and that shines through more in this second part than the first.

Aside from the hard-hitting action, “Masters of the Universe” also has a lot of heart and really shines the light on what each and every character is really struggling with internally. Outside of Skeletor’s need for power and wanting to seek more power, god-like power at this point. We get an inside look at how he views each and every person around him no matter what side of the coin they’re standing on. This is especially true when it comes to his relationship with Evil-Lyn, to whom he gives a power boost too and uses that as a chain and ball to hold her in place and hold her down, belittling her every chance he gets.

Despite how she’s treated by Skeletor, Evil-Lyn remains loyal and sticks by Skeletor’s side but Beast Man and Man-at-Arms often find themselves giving Evil-Lyn an outside perspective of how the world views her and Skeletor’s relationship. Beast Man specifically makes it a point to not only instigate and further ignite the growing tension that Evil-Lyn is feeling towards Skeletor by reminding her how little Skeletor cares about her and how he only views her as his possession rather than his mate and romantic partner.

One thing I enjoyed about this dynamic and huge focus on Evil-Lyn this season was her test of loyalty and the series showing us why she’s remained so loyal to Skeletor despite what she’s had to put up with. She’s always felt like she owed him a great debt and Skeletor always made it a point that she’d be nothing without her. Slowly coming to the realization of her self-worth. Evil-Lyn finally betrays Skeletor and assumes power by stealing The Power Sword from him becoming God-Lyn.

Teela coming off her very emotional arc from part one, now making amends with her father Man-at-Arms. Brings that same semblance of forgiveness and love to the series when she reunites Adam with his parents. Not only does this calm down the no Hulk-like version of He-Man but it brings Adams’ father, King Randor to open his heart to his son. I’m a sucker for a father/son love when watching movies and anime or any story for that matter so to see Prince Adam get that fatherly love he was looking for was great. Having Teela who was also looking for that fatherly love previously be the medium for that to happen was even greater.

This time around, Teela now finds herself not wanting to take on her calling of becoming the next Sorceress. But in the process also tries to cope with who her mother is and why her mother abandoned her as a child. It’s a huge contrast to what she had to deal with when it came to her father Man-at-Arms. With him, it was more of trying to get him to see her worth, not just as his daughter but as a fellow soldier.

This time, however, Teela wants what everyone wants, that nurturing love from their mother. It’s not about wanting to prove herself to become the Sorceress it’s about connecting with the woman who gave her life and wanting to have her in her life. Teela finds herself getting what she wanted, wanting to be with her mother, while also becoming the new Sorceress allowing her to fully protect her friends as she’s wanted to.

Throughout the season we’ve seen Teela push back against becoming the Sorceress because the Sorceress isn’t allowed to leave the castle and is also forced to abandon and cut all ties to their past life. Finding a nice middle ground to allow her to essentially have her cake and eat it too works out well for the final battle that ensues between her and God-Lyn, and He-Man and Skeletor who initially aided the group with trying to stop Evil-Lyn.

It is here that “Masters of the Universe” delivers an “Avengers: Endgame” scaled battle to bring the story to its epic climatic conclusion which sees God-Lyn/Evil-Lyn see the error of her ways and Skeletor defeated and Teela and He-Man restoring Eternal to its former self. Now that peace has been restored, Andra has now been named the new Man-at-Arms. Teela as the new Sorceress is free to roam and protect Eternia but wants Prince Adam/He-Man at her side. Meanwhile, Skeletor is captured by Trap Jaw and Tri-Klops who bring him before Motherboard who reveals her true self. Skeletor is shocked to see who Motherboard truly is and is injected with Motherboard’s code giving him new enhancements.

Overall, “Masters of the Universe: Revalation” Part 2 takes everything that worked in “Masters of the Universe: Revelation” Part 1 and dials it all up to 11. Our characters further explore love and sacrifice as they bring forth epic battles topped with Powerhouse Animation’s stunning animation style and aesthetically captivating visuals. All backed by solid writing and a superb voice cast.

“Masters of the Universe: Revelation” Part 2 is now streaming on Netflix.