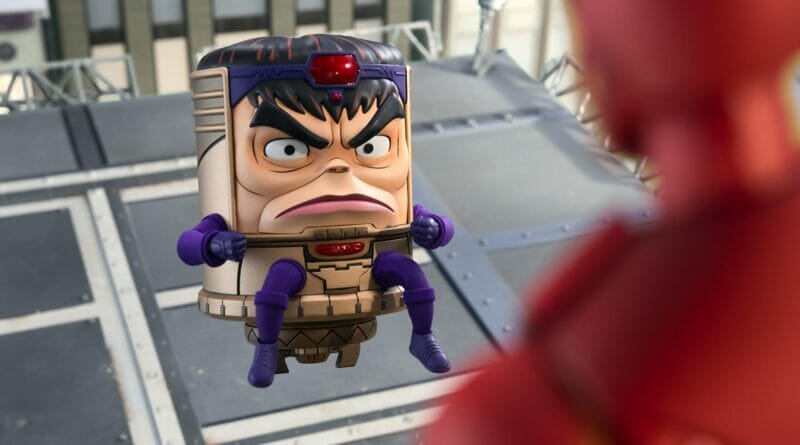 MODOK Review: A Great Piece of Marvel Content Outside of the MCU


MODOK has the puns, the killings, the gore, but buried underneath all that blood is a heart that cares, charms, and loves

When news broke that MODOK would be the sole survivor of the upcoming Hulu Original content based on Marvel Comics no one expected that the series was going to live up to the hype a portion of the fandom was generating. With stop-motion animation from the creators of Robot Chicken, created by Jordan Blum and starring Patton Oswalt as the Mechanical Organism Designed Only for Killing, the recipe for success was heavily overlooked.

Hulu’s MODOK follows the villainous MODOK who has just driven his A.I.M. empire to the ground due to mismanagement, poor leadership, and countless failed attempts at taking over the world. While also dealing with a failing relationship that’s leading to divorce and how said divorce is affecting him and his children. In order to avoid A.I.M.’s impending downfall, MODOK agrees to sell A.I.M. to Austin Van Der Sleet’s company GRUMBL; who in reality is the villainous Hexus, the Living Corporation.

MODOK now working for someone instead of being his own boss has to deal with the ramifications of this sale, a new boss, and battle at home. We don’t often get to see MODOK under this kind of light but it was a welcomed perspective for the villainous being whose sole purpose is to kill and fight the likes of The Avengers, Captain America, Ant-Man, and Doctor Doom.

While MODOK is more on the comical side of things it does an incredible job at showing MODOK’s softer side and what matters to him most other than taking over the world and getting his company back. Shedding light on how he feels towards his wife Jodie, his daughter Melissa, and his son Lou really makes you empathize with the villain. Spending ample time showcasing how these individuals view MODOK as well makes you empathize for him as he cannot help but be his own worst enemy as he tends to get in his own way; and wherever MODOK is, chaos ensues.

The series also features a hefty amount of Marvel Comics Easter Eggs and references that will take an entire viewing or two in order to catch them all. But it makes great use of its cameos with brief appearances from some of the heavy hitters in Marvel Comics while also spending time with some low-level street villains sparking enough of an interest in those who are not too familiar with the deeper Marvel comic book lore.

There are a few instances where the jokes don’t quite land but when they do, they are great and that’s all due to the near-perfect writing for this show and the great actors behind them proving their respective voices. This brings me to probably my biggest gripe with the show and that’s a conversation between Jodie and her publicists Bianca who uses the general Mexican stereotype, essentially a white person’s view of a Latina, to push Jodie in a certain direction in order to further promote her book.

And despite Jodie being distasteful about it at first, she ends up becoming the pig the white woman wanted her to be and that rubbed me the wrong way. Trust me, I get it, it’s dark humor, and the way Jodie spins it into looking like Carmen Sandiego and dating Wonder Man in order to get more publicity the whole thing crumbles and it’s probably the weakest part of the entire series. This specific plot point for this episode could be looked at weirdly from so many different perspectives and diving deep into that is another conversation for another day.

Despite all of that, I can glance over the issue and truly say that MODOK is a solid series from start to finish. It has all the puns, comedic timing, gore, it has heart and it deals with family deeply at its core, and it also has super solid animation despite being stop-motion which is one of the main reasons people were turning it away at first. There are some gems in here and anyone who is a fan of MODOK the character is in for a treat. Fans of Marvel Comics as a whole are also in for a treat.

MODOK leaves us on a cliffhanger now that our titular villain has fulfilled his destiny and goal of taking over the world as he now searches for a way to go back in time and save his family and bring them back to the current timeline he is in since he wants them around. Just goes to show that despite letting his family get killed over and over again for the sake of world domination, MODOK truly cares about his wife and kids.