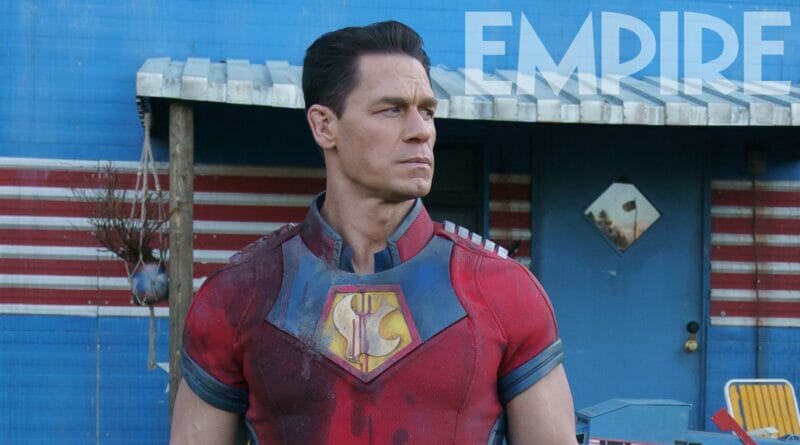 It’s a bit of a rhetorical question don’t you think? When it comes to Peacemaker, played by WWE Superstar turned actor John Cena, this is the same exact question everyone who will be watching The Suicide Squad and the Peacemaker series will be asking themselves. In a worldwide exclusive, Empire Magazine revealed a pair of first look images for the upcoming HBO Max series which is penned entirely by The Suicide Squad director himself, James Gunn.

While speaking to Empire Magazin, Gunn revealed more about Peacemaker and what makes him tick, and who he is as a character. “Peacemaker’s a piece of shit. He’s not a good guy. And he wears the goofiest costume you’ve ever seen in your life.”

“Peacemaker has a clear set of ideals that I find really interesting,” “You know: ‘I want peace no matter how many men, women, and children I need to kill to get it.’ Sounds like nonsense, but it also makes a lot of sense. And you see in John’s performance how he does not feel good about it – something I thought was the seed of an entire eight-episode show.”

It brings back up the question I asked at the beginning of this piece, how much peace can Peacemaker bring if Peacemaker brings no peace? And I think that’s the same question Gunn asks himself as he wrote this series. The HBO Max Original series is indeed a character study of this man and how he views the world he lives in. A world in which Superman, Batman, and Aquaman exist. “He lives in the world of Superman, Batman, and Aquaman, and that is not an easy thing for him to contend with,” said James Gunn.

“He represents a part of the world populace that is problematic, to say the least,” “and puts him in a situation where he has to face the choices he’s made throughout his life and the extremity of his views.”

John Cena also chimed in on his perspective about the character he is set to portray on both the big and small screens “This guy is a loud, obnoxious, bro-ey douchebag,” “That sucks. But why? At what point did he become such a douchebag and what does that mean? There’s a lot to dive into there.” said Cena.

While we’ll have to wait until 2022 to get more on Peacemaker and his story which seems to be focusing a lot on his origins and how he became to be the man we’ll see in The Suicide Squad. We’ll get to see him in action and a full-on display of his douchebaggery when The Suicide Squad releases in theaters and on HBO Max August 6th.

Peacemaker is written and directed by James Gunn (only the first five episodes) and will release in 2022.