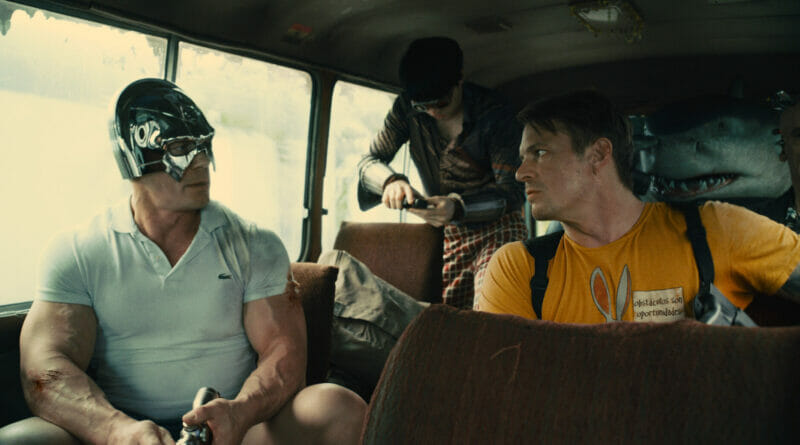 James Gunn’s “The Suicide Squad” was released in theaters and on HBO Max this past weekend and with it brought the live-action debut of Peacemaker played by WWE Superstar John Cena. Now that audiences have gotten a taste of Cena’s Peacemaker they can now look ahead to the upcoming HBO Max Original series which was created by James Gunn. In a recent interview with Variety, James Gunn reveals when the Peacemaker series will take place.

“Through the story, you learn where Peacemaker came from,” Gunn told Variety. “There’s a moment in the movie where Bloodsport talks about his father and what his father was like, and you cut to a shot of Peacemaker, and Peacemaker nods. That’s the seed of the entire Peacemaker series. So we get to see Peacemaker with his father, who’s played by Robert Patrick, where he came from, what he’s done, what that means to him, and where he’s going after all of this.”

“He’s not an evil person, he’s just a bad guy. He seems sort of irredeemable in the film. But I think that there’s more to him. We didn’t get a chance to know him [in The Suicide Squad] in the way we get to know some of the other characters. And so that’s what the whole show is about. I needed eight episodes to do it, at least.”

READ MORE: The Suicide Squad Review: An Exciting Joyride That’ll Have You Dying for More

When Does The Peacemaker Series Take Place?

The Peacemaker series will take place before and after the events of “The Suicide Squad” film. As Gunn mentions, the Peacemaker series will explore Peacemaker’s past, thus diving into his past and his origin and shedding light on who he is and his sense of justice. As we learn in the film, Peacemaker’s ultimate goal is to bring peace no matter what it takes. Something that was displayed in the film when he turned on Task Force X and killed Rick Flag. Peacemaker also did not hesitate to nearly kill Ratcatcher 2, and he would’ve done so if not for Bloodsports interference.

After being “killed” by Bloodsport, The Suicide Squad’s post-credits stinger reveals that Peacemaker is very much alive and recovering from his injuries. As one of Amanda Waller’s subordinates mentions, they’ll need him to save the world, thus perfectly setting up the Peacemaker’s post-Suicide Squad setting.

The “Peacemaker” series is set to release at some point in 2022 on HBO Max. The series is written by James Gunn who will be directing five out of the eight episodes the series will consist of. John Cena is clearly set to star alongside Richard Patrick, Steve Agee, Danielle Brooks, Jennifer Holland, Freddie Stroma, and Chukwudi Iwuji. Cena is also serving as co-executive producer on the series.

READ MORE: The Suicide Squad: Who Lives and Who Dies? [SPOILERS]