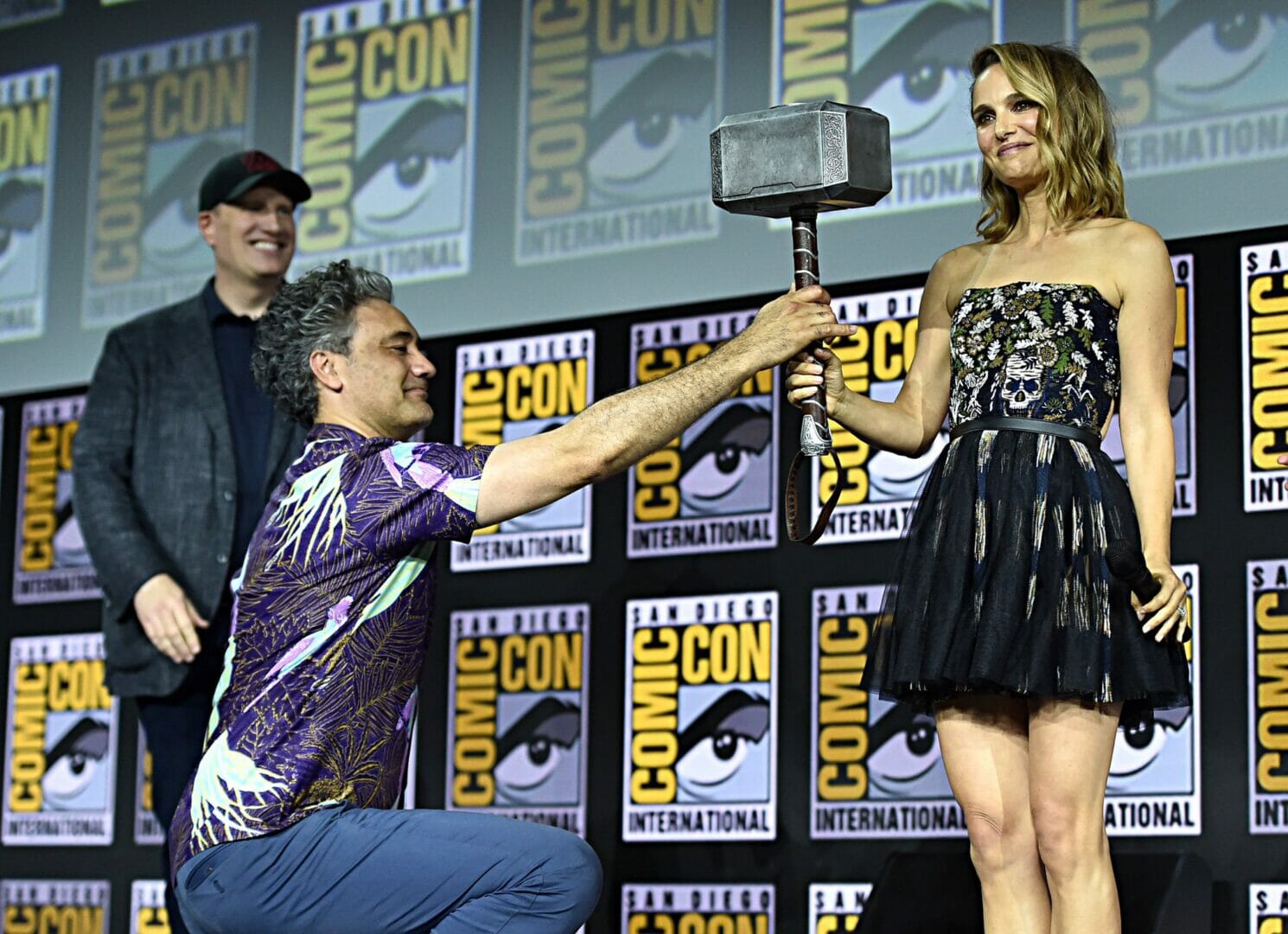 
Marvel Studios has once again returned to San Diego Comic-Con and Hall H and saying they took the con by storm is a heavy understatement. With Phase 4 completely announced last night at Hall H and a brief teaser of Phase 5 despite not being fully announced, we are here to break down all the bits of information that Kevin Feige and company revealed during their panel.

The panel started with a sizzle reel of the past 22 MCU films, highlighting some of its most epic moments, including the now highest grossing movie of all time Avengers: Endgame. While Feige and Disney both revealed during the panel that it would be official in a matter of days, Box Office Mojo has already updated the box office numbers and the record has been set in stone. Before commencing with their Phase 4 announcements Marvel revealed a slick new logo for the first decade of the MCU now officially dubbed The Infinity Saga.

The first announcement for Phase 4 came in the form of the now confirmed Eternals film.

The Eternals will be directed by Chloé Zhao. You can also check out an official piece of concept art for the film featuring The Celestials

Up next was the official reveal of the Disney+ series The Falcon and The Winter Soldier. Anthony Mackie and Sebastian Stan both took the stage to talk about the series. Mackie arrived on stage wielding his newly acquired Captain America shield. To top that all off, Marvel Studios revealed a fresh new logo (above) and a release date for the series which will arrive in the Fall of 2020. To cap it off really nicely, was the interruption of the panel by the one and only Baron Zemo, last seen in Captain America: Civil War.

While he wasn’t in attendance, Zemo still managed to get his point across and also gave fans in attendance their first look at Baron Zemo is his comic book accurate suit, including the beloved purple face mask.

Next up was the highly anticipated film Shang-Chi.

Major surprises came out from this announcement which was brought to light by director Daniel Cretton. Daniel officially introduced us to Simu Liu, who will portray the titular character Shang-Chi, and he also revealed who will be playing the REAL Mandarin this time around in Veteran actor Tony Leung. Both Tony and Simu were cast just days before their arrival at San Diego Comic-Con. And for those who are wondering, yes The Mandarin is the main villain in this film and yes, he will be using his iconic Ten Rings.

While this is just speculation on my behalf. I’m speculating that just like in Spider-Man: Far From Home, this film will have some ties to Tony Stark and what went down with the fake Mandarin in Iron Man 3. We all know that the real Mandarin was not fond of not one but TWO different individuals making a mockery of his name, so we can rest assure he is here to wreck havoc and bring some newly acquired respect to his name.

Along with the official logo for Shang-Chi and The Legend of The Ten Rings, Shang-Chi will arrive in theaters on February 21, 2021. Awkwafina was also cast in the film in an undisclosed role, but she is confirmed to star alongside Simu Liu.

Following the huge announcement for Shang-Chi, we got the official reveal and logo for the Disney+ series focusing on Scarlet Witch and Vision, WandaVision.

WandaVision is set to release in the Spring of 2021 and will star Elizabeth Olsen as Scarlet Witch and Paul Bettany as The Vision. But that’s not all. WandaVision will feature Teyonah Parris as adult Monica Rambeau. How this will tie into Captain Marvel 2 or the future of the MCU will remain to be seen and why she’s in WandaVision prior to being in Captain Marvel 2 also remains to be seen.

The announcements don’t end there. Elizabeth Olsen was confirmed to appear in the Doctor Strange sequel, reprising her role as Scarlet Witch. Not only that, but WandaVision will be a direct tie-in to Doctor Strange 2.

Taking it back to Disney+ came the official logo reveal for Marvel Studios’ What If…? animated series.

While a hefty slate of returning MCU stars are set to return to voice their animated counterparts, Jeffrey Wright was announced as the voice of The Watcher.

Staying on the Disney+ side of things, we got an updated logo for the Loki solo series starring Tom Hiddleston.

The series will follow the events of Loki after he escaped with the Space Stone from the year 2012, during the events of Avengers: Endgame. While not much else was revealed beyond that. Tom Hiddleston did tease some exciting ventures for the God of Mischief. Loki arrives on Disney+ in Spring 2021

The Disney+ Hawkeye solo series will dive a little deeper into the origins on Ronin. Hawkeye’s other persona which was first introduced in Avengers: Endgame. The series will also feature the introduction of Kate Bishop, who will be trained by Hawkeye to take up the mantle and become the new Hawkeye. Unfortunately, Marvel did not reveal who will be portraying Kate Bishop in the series.

For those comic book readers and fans of Kate Bishop, yes, we are hoping for the same thing. The inevitable live-action iteration of the West Coast Avengers, led by the one and only Kate Bishop. The fun didn’t stop there though. Earlier today Hawkeye himself, Jeremy Renner “leaked” the teaser trailer for his upcoming solo series which features a tease of Kate Bishop herself and what we can expect her costume to look like in the MCU.

Next up was the official title reveal of Thor 4, which just so happened to be announced just days prior to the start of San Diego Comic-Con. Along with that early reveal was the news that Thor: Ragnarok director Taika Waititi would make his directorial return for the film.

Thor: Love and Thunder which is hitting theaters on November 5, 2021, will see the return of Thor himself Chris Hemsworth, Tessa Thompson’s Valkyrie who will now be on the hunt for a Queen to sit next to her on the Throne of Asgard. Also confirming that she will indeed be ONE of the many LGBTQ heroes in the MCU going forward (more heroes of the same vein will be presented in The Eternals, confirms Kevin Feige). But the thunderous surprise was the surprise announcement of Natalie Portman’s return to the MCU.

And yes, that photo is real and the news is also real. Thor Love and Thunder will be adapting Jason Aaron’s The Mighty Thor run, in which Jane Foster finds herself worthy and becomes Thor, The Goddess of Thunder. Nothing else is known about the film but we are in for a Mighty Treat when Thor: Love and Thunder arrives in 2021.

Black Widow was saved for last and for good reason. Not only did fans in and out of attendance get official confirmation of the film, its cast and a release date (May 1, 2020). Fans in attendance were treated to the first ever footage of the film featuring an epic fight scene between Scarlett Johansson’s Natasha Romanoff and Florence Pugh’s Yelena Belova. Also confirmed was Budapest, which was seen in the footage displayed during the panel.

On the stage was Rachael Weisz who has been confirmed to be playing the villainous Iron Maiden. Stranger Things star David Harbour who will be portraying Red Guardian. Also in the attendance was O.T. Fagbenle who we can assume will be portraying Taskmaster. And speaking of Taskmaster, the first footage of Taskmaster was also displayed during the Hall H panel.

The film has also been confirmed to take place after the events of Captain America: Civil War

The surprises didn’t end there! Just before the panel ended, as Feige was bidding everyone goodbye. Feige brought out Academy Award-Winner, Mahershala Ali; in a SHOCKING revelation that he has been cast as Blade in the MCU.

With the clock winding down, having second to spare, Kevin Feige drops a few more bombs to send the attending crowd home in a frenzy. Feige officially announces a Fantastic Four film, an X-Men film, Captain Marvel 2, Black Panther 2 and Guardians of The Galaxy 3. All which will coming in Phase 4 of the MCU.

D23 Expo is happening next month and Marvel Studios is confirmed to be in attendance with a 15-20 minute panel spot. We can assume we’ll get some more reveals for the future of the MCU. So far, Feige has only announced TWO of the next 5-10 years of the MCU, so the possibilities right now, are endless.

Let us know which Phase 4 film and TV show you’re looking forward to the most in the coming years.