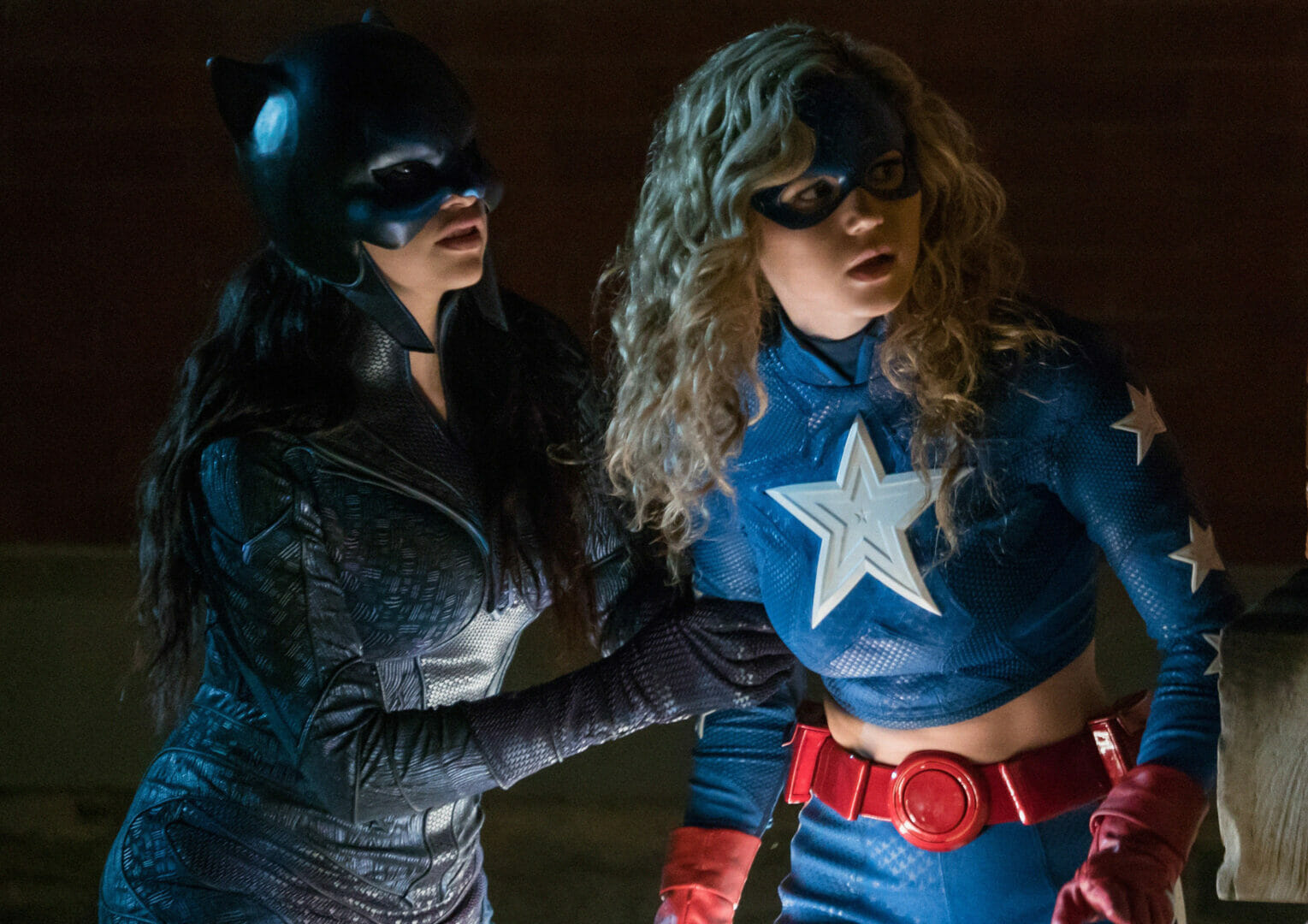 
After an encounter with Jordan Mahkent (Icicle) leaves William Zarick (The Wizard) and his son dead. Courtney (Stargirl) embarks on a new journey to recruit new members to form an all-new Justice Society of America team and her first recruit…Wildcat!

Yolanda Montez the young teen of Blue Valley High School who has become an unfortunate victim of slut-shaming by one of her peers finds herself at the edge of a cliff when an intimate moment she decides to share with Brainwave’s son, Henry is exposed to the world. As her world comes crashing down, Courtney comes in to lend a helping hand. After many failed attempts, Courtney finally manages to persuade Yolanda to let her into her world by allowing herself (Yolanda) to be brought into Courtney’s world.

The episode itself is very cheesy. It’s a tone that’s been set since the very first episode of the series. While that cheesiness falls a flat a few times throughout the episode, it succeeds in other places. These cheesy moments shine through when Courtney reveals to Yolanda that she is Stargirl while informing Yolanda about Starman and the Justice Society of America. This eventually convinces Yolanda to at least consider try on the Wildcat costume and try out all of Wildcat’s abilities which they learn about by doing a quick Wikipedia search.

Which was great because 9 out of 10 times, most of us are doing Wikipedia and Google searches in order to learn more about a superhero or villain in order to cram in as much information as possible instead of going out to a local comic book shop to purchase and read the hundreds of issues of comic books that have ever been released.

So while all of that was great and all, especially seeing Yolanda in action as the new Wildcat. Their first mission as the new JSA duo is full of mishaps and once again cheesiness that completely misses the mark. Granted, I’m totally excited about Courtney recruiting new JSA members, but I’m heavily concerned with how much cheesiness will be applied to the new, much younger iterations of these characters. It’s something that can make or break this series entirely. I know it might seem a bit too early to call but I think it’s something to be a bit concerned about four episodes in. Especially when the Injustice Society still consists of adults. So I’m not entirely sure how this dynamic will play out. Or if we will also get a new, much younger version of the Injustice Society as well.

In this episode though, we get the introduction of the leader of the Injustice Society, the Dragon King, or as Jordan Mahkent called him Doctor Ito. This interaction between the Dragon King and the man known as Icicle, was probably, for me at least, the highlight of the episode. For those who do not know, Dragon King is secretly the father of Cindy Burman. The most popular girl at Blue Valley High and Yolanda Montez’s tormentor. Seeing how she likes to instill fear into whomever she wants to belittle, including Courtney. It’ll be interesting to see if they give her comic book alter ego, Shiv down the line. Especially if they decide to bring in a younger version of the Injustice Society as I mentioned above.

Despite the cheesiness that surrounds Stargirl which was essentially hit or miss, especially in this episode. The episode does touch on some serious topics that often affect young teenage girls and even adult women in today’s society. The sharing of explicit photos to someone they trust only to have those photos leaked and shared with the world. My only gripe with how this played out was how quickly Cindy was able to grab Henry’s phone and send herself that image of Yolanda, which she eventually shared with the entirety of the school after she lost Student Head Body to Yolanda. I digress.

The series does a great job of showing how something like that can deeply affect a young teenage girl and how the entirety of her life can change in an instant. It also shows how young teenage boys love to kiss and tell. Unfortunately, Henry is never really reprimanded for his actions, but Yolanda was, severely; especially from her parents. That scene where she asks her parents for their forgiveness and they shun her out of the living room was heartbreaking, to say the least.

While it’s understandable why the parents can and should feel upset, I didn’t like how the episode depicted how the parents reacted to this specific incident. Not only did they focus solely on shunning their daughter who was essentially a victim, but they also refrained from taking any action towards Henry or Cindy for that matter. To make matters even worse, they refrain from being within the vicinity of the school entirely. This just didn’t sit well with me, unfortunately.

I’m not entirely sure if that’s what the show intended to display or what message they wanted to get across with the parents but despite Yolanda willingly sending that image, she’s still a victim and the parents failed to see that and how that incident and how they reacted have also mentally and emotionally affected their daughter. And ultimately shamed for her disgracing herself and the family like that’s more important.

On the bright side, the denial of forgiveness from her parents reignites the flame within Yolanda to fully take on the mantle of Wildcat, thus making her the first official member of Courtney Whitmore’s Justice Society of America. But what about Beth Chapel? Will she be Stargirl’s next recruit?

For more on Stargirl and television news, reviews and updates make sure to keep it locked right here at The Nerdy Basement. Also, feel free to support us on Patreon and listen to our podcast below!