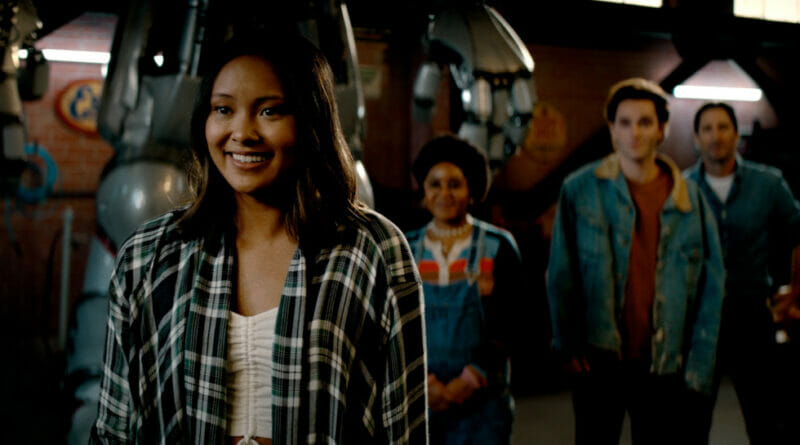 Stargirl is back again with another episode and this week we get more of Cindy Burman, more glimpses of Eclipso, and learn more about Jenny as Pat teaches her how to use the Green Lantern ring and its battery. This episode opens up with Cindy Burman returning home and putting a sort of hex on her mother. We quickly jump to the past to Jenny leaving a group home. Now that she is 18 she is considered an adult and can no longer stay at the group home. But before she leaves she is handed a small tin containing Alan Scott’s Green Lantern ring and a toy car with the name Todd written on it.

We see Alan Scott’s Green Lantern ring drop to the floor and choose Jenny as its next wielder and ultimately guides her to Courtney’s house where her father’s Green Lantern battery was being kept. The name Todd is a reference to Jenny’s brother, Todd Rice, the son of Golden Age Green Lantern Alan Scott.

In the comics, Todd is mostly known as the villain Obsidian. Where Todd is and whether or not he will make an appearance as Obsidian still remains to be seen and it’s probably the biggest question this episode leaves us with. Additionally, later in the episode, Jenny tells Pat and the rest of the JSA that all she wants is to reunite with her brother and has been searching for him but to no avail.

We jump back to the present to see that Pat and Barbara have agreed to let Jenny stay at their house for the time being. Jenny also shows a lot of praise for Pat as he’s considered a legend among those who know about the JSA. Courtney’s distaste towards Jenny shows almost immediately as she is really skeptical about who she claims to be and her overall intentions. In the midst of their conversation, Pat also agrees to begin training Jenny so she can learn how to use the Green Lantern.

This episode also introduces us to Richard Swift aka The Shade a member of the Injustice Society of America. Richard introduces himself to Courtney’s mother, Barbara, and beings to ask her about The Wizard’s belongings. After learning about The Shade’s reappearance in Blue Valley, Pat goes to meet with him to try and see if he can gain some insight about his arrival at Blue Valley.

As this is going on, Courtney and Jenny are both coming to terms with each other’s presence in each other’s lives. Courtney spends the majority of the episode being skeptical, jealous, and territorial about Jenny and her intentions. Especially with how she is reacting with Pat. As she learns more about Jenny and her journey and what she’s really struggling with. Courtney reveals to her why she was so skeptical about her.

Courtney was essentially dealing with imposter syndrome as she saw everything she wanted to be in Jenny and not being able to be all that Jenny is, in addition to being an actual superhero and the biological daughter of a superhero, she felt she needed to protect her territory, her family, and the JSA. As the episode draws to a close we see the JSA running downtown with the Green Lantern as it’s about to explode. Thinking this is their final moment with each other, Jenny and Courtney both confide in each other and Jenny sacrifices herself to save the group from the exploding lantern.

Jenny absorbs the blast and is now surrounded by the emerald aura as we have seen in the comics, cementing her as the new Green Lantern of this series. Wrapping things up we are back at Cindy Burman’s house as her mother has been convinced by Eclipso to kill her. Cindy successfully defends herself and stops her mother’s attack. Eclipso tries to convince Cindy to kill her mother but she refuses. Eclipso then takes over Cindy’s body and kills her mother.

After witnessing her mother’s death, Cindy tells Eclipso that she is the one in control and not him and this will be the last time he takes over her body against her will. Additionally, she did not want her mother to die. It’s for sure one of Cindy Burman’s most vulnerable moments towards her mother through the entirety of this season so far, which was a nice change of pace for Cindy who’s ill-willed the majority of the time.

Overall this episode was great, as we got to learn more about Jenny and her backstory, even though there is more to explore. We also got to see different sides from our lead characters in Courtney Whitmore and Cindy Burman. More teases of Eclipso and the introduction of The Shade are really starting to lay the groundwork for a big battle later on this season.

Stargirl airs every Tuesday night at 8:00 PM EST on The CW and streams free the next day on The CW App.