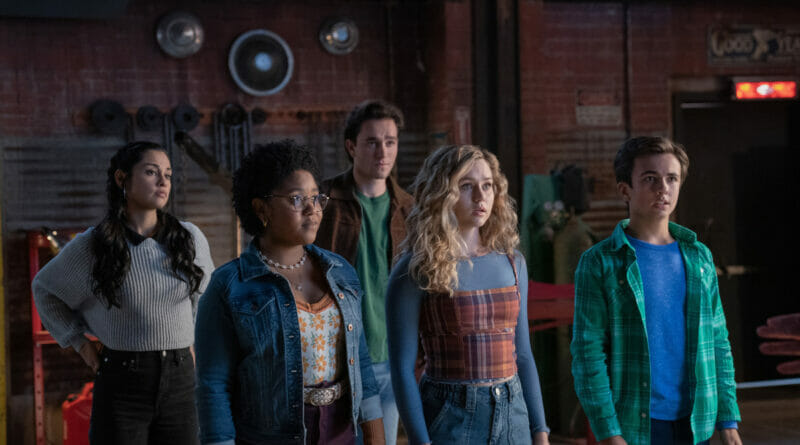 This week’s episode of Stargirl Season 2 takes us back to December 2010 mere hours prior to the Justice Society of America facing off against the Injustice Society of America as we saw in the pilot episode of Stargirl Season 1. Here we meet Johnny Thunder who is upset for not being allowed to join the fight against the ISA. As he is venting to Pat Dugan, he mentions how powerful he and Thunderbolt really are, while they might seem useless, on paper, Thunderbolt is stronger than the Green Lantern, The Flash, and the rest of the JSA.

As Pat is trying his best to calm Johnny down, we the original Wildcat, Ted Grant ask Johnny Thunder to join the fight against The Shade. Pat tries to join the fight but is urged by Wildcat to stay behind as per Starman’s orders. We then fast forward to the present day and follow Mike Dugan on his paper route until he runs into some bullies who are trying to rob him for the little change he makes with his paper route. While on a call, Mike is trying to write down some information, seeing as his pen is out of ink, he rushes into Courtney’s room and grabs the pink pen which is housing Thunderbolt.

The following day, we follow Mike Dugan on his paper route once again but things are looking weird, as everything is marked with the saying “So Cool!”. After accidentally saying the phrase out loud, Mike Dugan summons Thunderbolt thus becoming his new master in the process. Thunderbolt informs him about the phrase “so cool” and how it’s a phrase based on the name of his home dimension and informs Mike about the wishes he can grant for him. Although things get wonky, Thunderbolt informs Mike that he needs to be very specific when asking for a wish to be granted while also telling him what wishes he cannot grant.

Meanwhile, at the Pit Stop, Pat is informing the team about Richard Swift aka The Shade, his powers, age, his history, and eventual fallout with the Injustice Society of America. Pat also reveals to the team that The Shade is responsible for the death of Doctor Charles McNider aka Doctor Mid-Nite. As we all know, Doctor Mid-Night was taken away by The Shade in the pilot episode of Stargirl Season 1.

Back in school, Yolanda and Courtney are in class and are talking a little too loudly about their involvement with the Justice Society of America and their current plans to find The Shade. Isaac Bowin, who is also in this class overhears them talking about the JSA. After class and on their way home, Courtney and Yolanda run into Mike and after a few shenanigans Thunderbolt reveals himself as Mike proclaims himself to be the newest member of the JSA.

Back at the Pit Stop, Pat is not too happy about Courtney having the pink pen in her possession. He also doesn’t want Mike to keep the pen or be a fully-fledged member of the JSA. Coming from a parental perspective it falls in line with how Pat has been throughout the entirety of season one and even more now as we start to dive deeper into season two. The dangers are getting bigger and the team isn’t quite up to par and Mike, just like he isn’t much of physical help. Pat asks Mike to let Thunderbolt out so they can have a 1:1.

Here we learn a bit more about Johnny Thunder’s final moments before his death and eventually his final wish. But we also learn why Thunderbolt chose Mike as his next master. Thunderbolt lets us know that Johnny Thunder wanted him to find a new friend, and Thunderbolt’s prerequisites when it comes to finding someone as his new master is for them to be just like him, lonely. And that’s how Mike has been feeling all this time. Pat is visibly devasted at this revelation.

Outside the Pit Stop, Mike pleads with Courtney as to why he wants to be in the JSA. The interesting thing here is that you really see and empathize with how lonely Mikey feels. Looking from the outside, he just sits back and watches Courtney have all the fun as Stargirl. Whenever he tries to join in on the fun Pat immediately puts a stop to it. While understandable, you can see where and why Mike feels alone and isolated. Plus he hasn’t really made any new friends since moving to Blue Valley outside of Jakeem, and we’ve barely seen them hang out together.

Courtney and the rest of the team convince Pat to let Mike help them with finding The Shade by coming up with the perfect, most specific wish to help them find him. After the wish is said, Thunderbolt locates The Shade around William Zarick’s home. As the JSA assembles and goes out to hunt down The Shade, Mikey is immediately benched. This scene was a great parallel to Johnny Thunder being benched earlier in the episode. Amidst his feeling of rejection, Mike begins to write up a new wish.

Mike suddenly arrives and shouts his wish but is instead zapped and knocks himself out which allows The Shade to escape. back at the Whitmore/Dugan household, Mike and Courtney are lectured by Pat and Barbara, and in the midst of the conversation, Mike accidentally wishes Thunderbolt away. We then see the pen land on the desk of Jakeem, who is fully introduced in this series for the first time after being name-dropped several times. Paving the way for the Jakeem Thunder/Thunderbolt duo and newest member of the JSA down the road.

Barbara and Pat briefly discuss Mike’s loneliness and tells Pat that they are all responsible for him feeling that way. Pat understands he wants to be part of the JSA and the overall team but he knows he doesn’t necessarily feel like it. Barbara emphasizes that he is part of the team, with or without the pen, hell they’re even part of the team even without costumes.

Barbara also informs Pat about The Shade stealing The Wizard’s jewelry box which contained the Black Diamond. Pat tells Barabara that the Black Diamond is something they need to be worried about. We quickly switch back to Beth who has been struggling with trying to get Chuck up and running again. Beth then reveals to Rick that her parents are getting a divorce and she doesn’t know how to process what’s happening. Rick then encourages her to talk to her parents about it and tell them how she feels.

Just as Beth is about to leave, Chuck calls out, Beth puts on the goggles and Chuck warns her about Eclipso. All the while The Shade is visibly concerned about Eclipso potentially killing Stargirl and the Justice Society.

Stargirl Season 2 continues to lay the groundwork for the eventual emergence of Eclipso. Based on everyone’s reactions, this includes villains like The Shade, Eclipso is not your typical villain. Based on what we’ve seen in the premiere episode and last week’s episode, Eclipso will be Stargirl’s biggest challenge yet.

Stargirl Season 2 airs every Tuesday night at 8:00 PM EST on The CW and streams free the next day on The CW App.