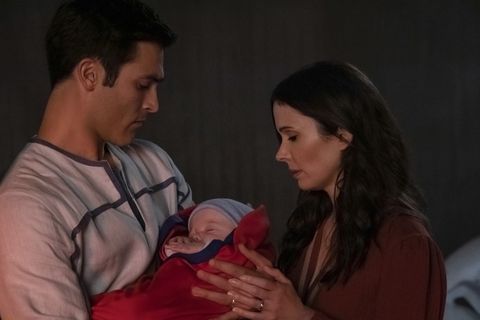 
Superman and Lois reiterate why a family and sacrifice are what make a superhero’s story meaningful and impactful.

By switching the narrative, Superman and Lois, along with WandaVision showcase how impactful family can be to superhero or superheroine. What does death mean with no one to mourn? What can we sacrifice if we have nothing to lose? Superheroes should fight for their loved ones, but with no one to love their fight seems detached. In recent years from comics to movies, from the retcon of Spiderman and MJs marriage to Snyder’s distant and detached Papa Kent, distance is growing.

Flashpoint: Batman reads a letter from his father. Rebirth: Superman, Superman, and Lois raise Jon on a farm, giving him the support and love his parents gave him. Gwenpool: Gwen realizes, now trapped in the Marvel Universe, she will never see her parents again. Avengers: Endgame: Captain America lives the life he lost, with Peggy, his love. Avengers: Infinity War: Vision is killed by Wanda, by his request, so that Thanos can’t win.

The moments we remember, the moments that matter, aren’t Gods flying in the sky, but the people they fight for. Increasingly in recent years creators and studios have forgotten what makes a hero isn’t his strength, but his sacrifice. But Wandavision, Superman and Lois may yet usher in a new era, where we remember why we fight. The most important character in a heroic tale isn’t the God, but the men he protects, the men who inspire him to fight. Superman’s death without Lois’ tears is not the death of hope…it’s a lost weapon. A God who doesn’t walk among us is not our savior but our keeper.

Men are men because of those they have loved and lost. It’s no coincidence that Bachelor Tony Stark finally settled down with Pepper and started his family right before his death…the writers needed additional narrative weight to his sacrifice. A million deaths is a statistic, one is a tragedy. A man sacrifices himself for the world and no one weeps, his daughter cries and we recognize his sacrifice and suffer too. No matter how close we may be to a fictional character for their battles to mean anything they need to be grounded in the suffering and sacrifice of family, friends, and the familiar.

Wandavision inverts the action first emotion second mold of the MCU. The catalyst is emotion. Emotional consequences aren’t thrust forth from outside agents, emotional actions are the engine of the narrative. Wanda fights for her family. The world doesn’t threaten her family, she does. When her world is attacked the emotional impact strikes us first. The emotional impact doesn’t exist to give weight to a major action piece, it is the major action.

Action is apathetic without awe. Wonder at not the scope, but the personal struggle of the battle. Its toll on the tethers of that super-being. Superman needs Lois because she provides fragility in the form of humanity. Kryptonite isn’t Superman’s biggest weakness, Lois is. But she is also his biggest strength. What makes Superman super is his powers, but what makes him a hero is the lessons his parents, his partners, and his friends taught him.

Superman and Lois is Superman’s mainstream rebirth. Not just because like in the Rebirth comics he has (a) son(s), but because it allows us to engage with him as a dad. America’s dad. That is what Superman is. Having children allows us to see Superman is Pa Kent. His strength and heroism lie in his desire to inspire others to strive towards their best self. Clark’s children, Lois, The Daily Planet don’t exist (solely) as narrative stakes, but importantly for small, quiet moments. A baseball game, dinner with your family…these little moments that make a great, happy life. As Jonathan taught Clark he must teach his children, these small moments matter more than the big…these small moments make the big moments.

We get to watch him instill in his children the truth and justice he aspires to bring. Not vengeance but a path to peace. The sun may give him his powers, but his sons give him his strength. As we move into this era of family, friends, and world-ending feuds we must remember these little moments matter. They make the big moments. Loss needs love. Struggle needs sacrifice. Hope needs heart.