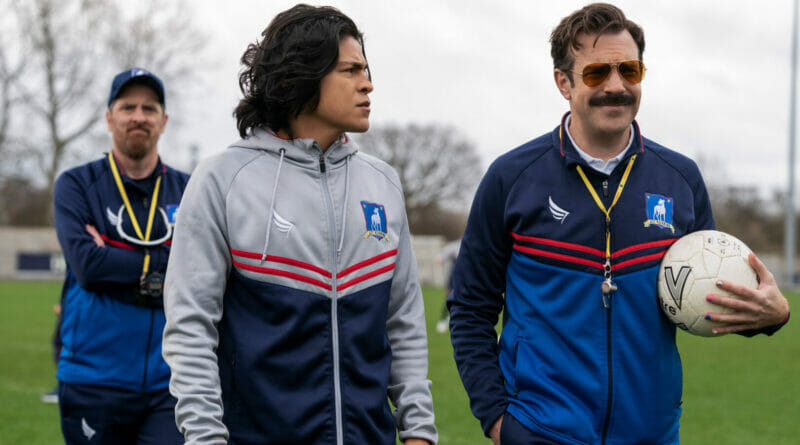 
Ted Lasso is determined to make a comeback from relegation with an ever charming and hilarious season 2 premiere.

With a Golden Globe to his name, Jason Sudeikis returns with another great performance as the loveable and endlessly optimistic Ted Lasso. Like most of you reading this (maybe not) I was up way past my bedtime waiting for Kanye West to drop his 10th studio record, “DONDA”. And… When that didn’t happen, I was filled with boiling and dangerous rage at 12:15 in the morning. I punched walls, slammed doors, and was overly cruel to an ant I found on my patio. In the wake of my lengthy rampage, I swear to god, I said this to myself: “This isn’t the Lasso way.” Then I remembered. It was July 23rd. Which meant, my new favorite sitcom returns to AppleTV+.

Every ounce of anger I had subsided into minor acts of fist clenching. I pressed play and it was exactly what I needed. Admittedly, I am very late to the Ted Lasso party. Starting the series and finishing it in the 5 days before the season 2 premiere. I am seriously considering rewriting a piece I did a while back that listed the best shows of 2020. But moving forward, the show is back and I couldn’t be happier.

The Jason Sudeikis-led comedy leads with its biggest strength, which is its highly endearing optimism. We had last left A.F.C. Richmond with a painful defeat against Manchester City. And if there’s anything this team needs it’s… you guessed it! A team therapist! Ok maybe you didn’t guess it, but after what happens in the opening 5 minutes, I’d need one too.

We pick up with what feels like a few months from where season one left off. It’s a nice change of pace to see the team work closely with Lasso instead of ignoring every delightful metaphor and positive reinforcement he offered. With the introduction of a team therapist, I knew we were going to dive into every secondary character. Which is fantastic since the team is unified as one, instead of fighting Ted Lasso or each other.

We find that Ted Lasso is highly opposed to the idea of therapy, which in turn offers us a little more of a window into how Lasso operates. Additionally, we come to find Roy Kent has retired. He and Keely are living easy with Roy hilariously coaching his niece’s little league. I was surprised to see the show venture off the football field and into the lives of those away from the sport. Getting my mother to watch this show was extremely difficult.

She was under the impression that this is a ‘Soccer’ show. What’s funny is that we rarely see soccer games play out. We usually cut to the end of it or are given small glimpses of the game. The main focus of the show is to detail a disjunct football club off the field. And we were happy to see Ted unify the once disjunct into a tightly knit team.

Ted Lasso offers the best of the American sitcom. Heavy optimism, likable characters, complex character arcs, etc. What this show does the best, is giving the good without the price of the bad. Even when things happen that go against the show’s optimism, is reduced to insignificance thanks to the writer’s wisdom. You find it in the form of Lasso uplifting the team when they lose a game. We realize immediately that we don’t care for the game, we care about these characters’ happiness and state of mind more than a trophy.

The season two premiere of Ted Lasso is undeniably promising. If you haven’t caught up on the first season, I highly recommend you give it a watch on AppleTV+. Sudeikis returns after his Golden Globe win to deliver the most endearing and loveable performance on television right now. I can’t wait to dive into these characters more than we already have. With its shortened episode list (from 10 episodes to 8) the series will have new episodes on the streaming platform every Friday.