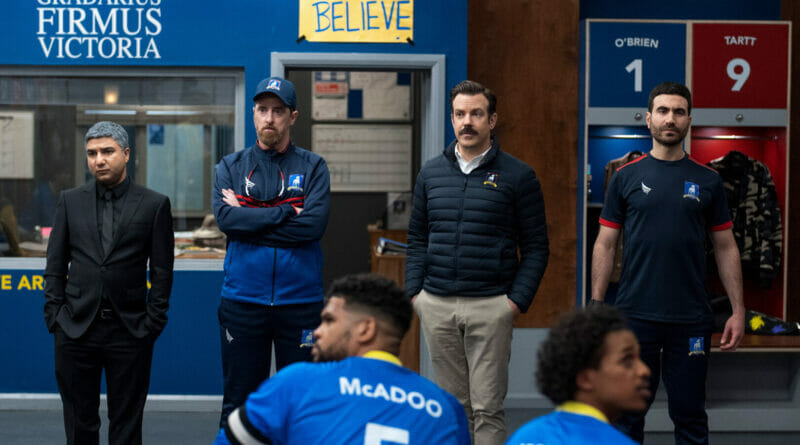 
The Emmy-winning series digs deeper beyond inspiring optimism and finds matured storytelling with well-rounded character arcs. Sophomore slump? The Ted Lasso team has never heard of such a thing. Is the second season better than the first? Yes. 100 times yes. Every character we are introduced to in the first season has their moment in the sun to expand and unravel. Some for the best, some for the worst. 12 masterful episodes and every second of every scene were utilized to further character, story, background, etc. Not to mention it’s incredibly endearing.

There is a cynicism you will find in modern film and television where in order to get the good our characters have to go through the bad. Ted Lasso says “screw that” and gives us the good without any condition. This may give way to cheesy and unrealistic situations, but with a higher understanding of every character, it all made perfect sense. It’s almost as if Ted Lasso takes place in an alternate universe where everything works out. Season 2 has its cheerful philosophies intact however some arcs take a pessimistic turn.

We will now be getting into spoilers, you have been warned. Spoilers ahead for Ted Lasso Season 2.

Let’s discuss the final scene. A villain arc is seemingly completed. Praise is due to Nick Mohammed who brilliantly portrayed a character that we didn’t think would get deep. Season One saw Nate as an endlessly awkward, yet, genuinely lovable character. A character that we thought would constantly be the comedic cherry on top of the already endearing A.F.C Richmond. Season 2, however, deepened Nate as a character on an introspective level, more so than other characters. We first saw the signs of a villain arc when we saw Nate treating the new towel boy harshly. We watch Nate evolve internally with his newfound fame as a coach.

It evolves and evolves until it explodes in the final episode. He confronts Ted about the hypocrisy of his optimism and the respect Nate feels he deserves. It’s especially painful to watch their confrontation knowing that Ted took a chance on Nate and always believed in him. Nate’s change and evolution didn’t come unsupported. We saw this spiral in an assortment of different ways and situations. We saw the conflict inside of him and manifested itself in his decisions. For those of you that noticed Nate’s hair gradually gets grayer and grayer, this transformation was also given a visual aspect. We found Nate in the finale abandoning Richmond and joining Rupert’s new club. For a performance like this, Nick Mohammed boasted the chops needed to pull it off.

The show is called “Ted Lasso” but we move away from Ted’s story quite a bit to focus on other characters. Though we dive deep into Ted, every character is expanded on. Roy and Keely’s relationship, we saw, went through some testy waters and culminated into what seems to be a mutual breakup. We watched both characters grow in different ways. Keely in the end made strides in her career and achieved the professional independence she worked towards. Roy on the other hand found fulfillment in his retirement by joining the coaching team for Richmond. He also learned to curb his anger and learn to forgive. Roy and Keely’s relationship cleared every hurdle and warmed our hearts at every turn. However, in the end, it seems their relationship deserves a break in order to grow stronger. This is one of those moments where Ted Lasso supplies a reality check and grounds the show in what’s realistic instead of cheerful or optimistic

Coach Beard snagged the spotlight for a full episode. The episode not only expanded on Beard as a character but showcased Brendan Hunt as a clever performer. He perfectly captures the middle ground between what’s funny and what’s melancholic. Hunt found that middle ground by being a different sort of charisma that Ted possessed. It’s a relatable performance that displays when there are highs in life, they are HIGH, but when it comes crashing down to a low, it’s hard to shake. Beard has displayed his love for the sport and though he shares philosophies with Ted, Beard wants to win. He wants to feel that he does a good job at what he does as a coach. Beard’s episode was one that I greatly appreciated and made me look forward to what the show has in store for him.

I’m sure everybody can relate to this next statement. Watching Ted Lasso cry is an absolute pain. It’s like seeing your Father cry. We saw a lot of Ted’s tears and they wrecked us. We explored Ted’s aversion towards therapy, which initially felt wrong since Ted is a person that puts a person’s well-being over just about everything. As soon as Ted’s anxiety worsens, he puts his aversion aside and seeks help. We learn the tragic details behind Ted’s unwavering optimism. He develops past the nice guy persona and shows us how he gauges situations and operates. Jason Sudeikis navigates Ted’s complexity with such nuance and emotion. He shows off his abilities as an actor that I feel we’ve never got to really see outside this series. Yes, I think he’s due for another Emmy.

Ted Lasso showed no signs of slowing down their rise to the best show on television. I say that as if they aren’t already. At the end of every episode this season I found myself smiling at the screen like an idiot because there isn’t a show that has personified happiness the way Ted Lasso has. Season 2 closed out in a way where I felt I had my fill. Arcs and stories were rounded out in such a way where season 3 can take all the time they need. I have one lasting thought in relation to this show. If I ever see Olivia Wilde or Harry Styles in public it is ON SIGHT. It’s Jason Sudeikis supremacy here at The Nerdy Basement.