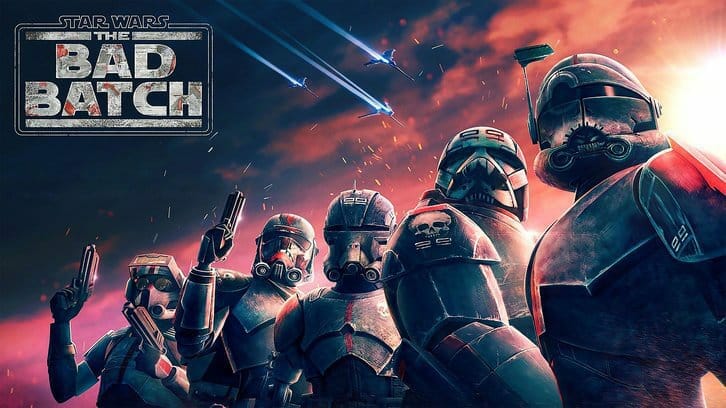 Star Wars: The Bad Batch, premiered on May the 4th to the streaming site Disney+ with a 75-minute premiere titled, Aftermath, directed by Dave Filoni. The show is a direct continuation of the show, Star Wars: The Clone Wars also overseen by Dave Filoni. Taking place after the events of The Clone Wars and Revenge of the Sith. The series follows Clone Force 99, or The Bad Batch, (a group of genetically enhanced clones) as they struggle to find their place in a rapidly changing galaxy. After experiencing the events of Order 66, the Bad Batch finds themselves confused and defenseless against the likes of the new galactic empire.

There was much to be enjoyed from this first episode. Right off the start, it is important to mention how beautiful the animation looks, the show has outdone itself in this regard. Using the same animation style that was used to finish Season 7 of The Clone Wars it is of no debate that The Bad Batch has a cinematic level of animation.

The episode works on many levels for many reasons, the big standout being The Bad Batch themselves. Each of the five clones is unique and compelling in their own right with Hunter and Crosshairs being the two standouts. It is also worth mentioning that Dee Bradley Baker does a phenomenal job voicing all of the clones, bouncing miraculously back and forth between them effortlessly.

The show creates unique and compelling obstacles for Clone Force 99 that will be interesting to see played out through the rest of the season. I particularly look forward to seeing the relationship between Hunter and Crosshairs. With Crosshairs now being affected by Order 66. For those who have seen The Clone Wars, it will be nice to have Echo back in the spotlight. Currently struggling with PTSD from returning from the dead at the beginning of Season 7 in the arc titled “The Bad Batch”, it was unexpected to see Echo having to struggle with these more mature issues of torture and trauma.

It should also be noted that going forward Echo might be subject to disaster based upon the final moments of the episode “On the Wings of Keeradaks” ( The Clone Wars S7 E3) where Wat-Tam-Bor says “we must find a way to recoup on our investment” referring to Echo.

This episode also gives the unexpected as it sheds some light on the transition between the Republic and the Empire. Something I had not put much thought into originally but look forward to seeing in the future. The Bad Batch premiere also brought with it the reveal of many returning characters from past shows, from the likes of Star Wars: The Clone Wars, and Rebels. Finally showing us Kanan Jarrus’s backstory regarding his master and Order 66, all of which were only spoken of during the likes of the show, Rebels.

Some fans may find themselves fuming after witnessing this for it retcons the popular Kanan series, a comic that told a different side to Kannan’s experiences during Order 66. However, as someone who has never read the series, it was a pleasant surprise to see a young Kannan and his master during the fall of the Republic. Beyond the introduction of Kannan Jarrus, the show showed us the return of Grand Moff Tarkin, in an animation style that seems a product of Clone Wars and Rebels animation giving again, a beautiful, sleek cinematic look to a beloved character.

The most notable return may have to be Saw Gerara, last seen in Season 5 of The Clone Wars in the episode “Tipping Points”. His appearance came as a welcomed one, hopefully not seeing the last of him and shedding some light on the gap between The Clone Wars and his appearance in Rogue One and Rebels, where we find him deformed. Finally, the show showed the return of some smaller characters throughout the series such as Nala Se, Chancellor Palpatine, and the medical droid AZI-3 who helped Fives at the end of Season 6 of The Clone Wars.

Along with the plethora of returning characters, the show also introduces a new character to the mix, a young girl named Omega. Currently, there is still much mystery surrounding the origins and abilities of her character, so it should be interesting going forward to see how she develops within the group and how she affects their dynamic.
The only concern I could see going forward with the show is that it will sacrifice setting up a larger story for the sake of delivering cameos, to show us past characters.

All in all, this first episode was a strong reintroduction into the Star Wars series and left me excited to see more. It does a great job at humbling our heroes as much as it builds them up, offering a unique dynamic that keeps the viewer engaged and interested. Whether you are a die-hard Star Wars fan or just a casual follower there is something for everyone to love in this first episode.

With new episodes, every Friday on Disney+ be sure to check out Star Wars: The Bad Batch. For weekly coverage on everything Star Wars and The Bad Batch themselves be sure to tune in here at The Nerdy Basement.