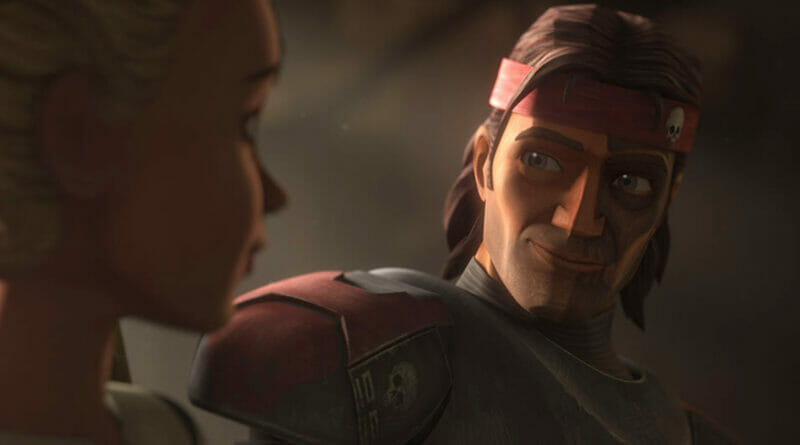 “Cut and Run” is the second episode of the new Disney+ Original series, The Bad Batch. A show that follows Clone Force 99, a group of five genetically altered clones with enhanced and unique abilities. After witnessing the events of Order 66 we find The Bad Batch fugitives of the newly formed Galactic Empire. With nowhere to turn but to an old friend the group meets up with an unexpected ally. This was yet again another strong installment to the new series, featuring more returning characters from the likes of Star Wars: The Clone Wars.

With the Bad Batch on the run, there was only one person to turn to, and that person was none other than that of the clone trooper Cut, from season 2 of The Clone Wars in the episode titled, The Deserter. In that episode, we learn that Cut is an abnormal clone who broke free of his programming and settled down on Saleucami with a family, a fugitive from the Republic for abandoning his post. It is only natural that The Bad Batch would turn to another fugitive for help.

There was much to love and get excited about in this episode. One moment in particular that stuck out to me was when the group first lands on the planet and we see the new character of, Omega, ask the group what dirt is, as she examines it in her hand. This was a nice detail that adds a level of complexity to the character of Omega by showing how sheltered she was on Kamino, begging the questions, who is she, and does she have abilities of her own? Another strong takeaway from this episode was seeing more of Hunter and Omega’s relationship.

For we see that Hunter is struggling with the guardian role. Using this father/daughter dynamic is an interesting obstacle for Hunter, putting him far out of his comfort zone. Which is fun to watch, for Hunter in previous installments, has always been level-headed and prepared, the leader. Now we see him confused and frustrated over Omega and her future. Omega being new to everything is also an interesting obstacle for the show, allowing for hiccups in the group’s plans due to her lack of knowledge of the way the world works. This is a unique dynamic for the show and it excites me to see what else is in store for the two going forward.

A smaller easter egg in the episode came from Cut when he mentions to the group that Clone Commander Rex had just passed through, confirming that he is alive and kicking. This off-handed line brings hope to fans everywhere that the Bad Batch might cross paths with the former Commander in the future. Being optimistic, we may even be treated to the likes of Ahsoka Tano at some point this season. Always a welcomed return.

The center of the episode revolved around getting Cut and his family safely off the now Empire-controlled planet of Saleucami. The episode was suspenseful, leaving you constantly anticipating and questioning if they will complete their mission in time. Beyond the surface entertainment of the episode, it was nice to again see the smaller details of the transition between Republic and Empire. This time we see how everyone must register for a Chain Code to be able to travel freely in the galaxy.

A great line from Tech, a Bad Batch member with an enhanced mind, points out how the numbered clones once tried to take names and now everyone is trying to get numbers. This is an interesting parallel that plays well in the show whilst also being practical for the larger expansion of the Star Wars universe.

Although not as strong as the premiere, in my humble opinion, there is still so much to be loved and appreciated whilst watching Cut and Run. The show seems to be continuing to set up the world and characters, post-Order 66. A time period filled with potential and not fully covered as of yet. I am excited to see what is in store next week for our heroes. For all Star Wars news and coverage be sure to tune in here, at The Nerdy Basement.