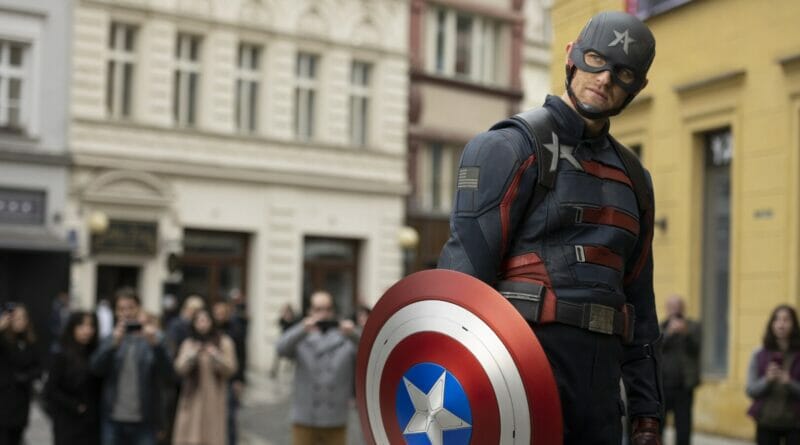 The Falcon and The Winter Soldier Episode 4 (Review)

As we start to near the end of The Falcon and The Winter Soldier, this week’s episode was the series’s best episode to date, with it bringing forth its most action-packed episode, revealing ulterior motives and truly questioning who’s right and who’s wrong in this world of superheroes these characters live in. Meanwhile, also bringing forth the most impactful Captain America scene in MCU history as the new Captain America John Walker, taints the beloved legacy The Falcon and The Winter Soldier valiantly fought for.

Last week’s episode of The Falcon and The Winter Soldier saw the return of Baron Zemo (Daniel Bruhl) and Sharon Carter (Emily Van Camp). This week both characters make their return again all in an attempt to further stop Karli Marthenhau and her Flag Smashers crew while also trying to keep The Power Broker in the shadows.

Despite the welcomed overload of action pieces which we all kicked back to enjoy just like Zemo did. We get a lot of ties to Black Panther and Captain America: The Winter Soldier which further expands Bucky’s character development and his transition as The Winter Soldier into the White Wolf of Wakanda.

Things start to get muddy as soon as John Walker aka Captain America aka The U.S. Agent arrives on the scene to assert his presence and his need for respect as the new Captain America, which sadly for him, he hasn’t gotten. At least from the heroes and villains who came before him.

Things go really south after John Walker intrudes in the conversation between Sam and Karli who up until that point had gotten through to her and made her see the error of her ways. Walker’s intrusion causes a massive fight between our heroes and The Flag Smashers which in turn leads to Zemo nearly killing Karli and destroying most of the Super Soldier Serum she had in her possession.

John Walker stops Zemo in the process and also recovers one vial of the serum and keeps it for himself. From here on out we get the most intriguing question of all. ‘If given the opportunity, would you take you the Super Soldier Serum?’ and this is the show’s way of showing everyone’s true colors. When Zemo asks Sam, he says ‘no’. When John Walker asks Lemar if he would take it he says ‘yes’ because in his eyes he and John would’ve been able to save more lives during their times as soldiers in Afghanistan.

This moment of realization, topped with the ass whooping John Walker received at the hands of the Dora Milaje who clearly aren’t Super Soldiers but are superior hand to hand combatants really pushes him over the edge and is the fire that further lights the fuel that Walker was looking to fan as an excuse to take the Super Soldier Serum.

The effects of all the choices over the course of this episode have now overflowed and have now reached Sam’s sister and his nephews as Karli makes them potential targets if Sam breaks her trust again. As much as Karli is being painted as a terrorist here and while it’s not entirely false, just like Sam believes, Karli is fighting a good fight, but what tips the scales against her is her approach to that fight.

Everyone in this series is right in their own way but the lines get blurred through the lens of who’s watching the fight go down so just like Sharon said, it’s all hypocritical. And that sense of hypocrisy is cemented during the final moments of the episodes which start with the second encounter between the Flag Smashers, The Falcon and The Winter Soldier, John Walker, and Lemar Hoskins.

John Walker who has now taken the Super Soldier Serum is essentially full of roid rage and starts laying the smackdown on the Flag Smashers which is what he wanted other than wanting to be able to keep up in battle against the Super Soldiers he is facing.

What makes matters even worse and this just cements the downward spiral and taints everything everyone has been fighting for is when Karli accidentally kills Lemar Hoskins (such a shame because I was hoping we got to see Battlestar suit up at some point), this truly sends John Walker over the edge and he goes on the hunt for Karli. Not being able to get his hands on Karli John Walker settles for one of the Flag Smashers and kills him with Captain America’s shield. Tainting the legacy of Captain America and his shield with this kill and the blood that has now stained it.

This moment just goes against everything Steve Rogers stood for during his tenure as Captain America but also makes the U.S. Government look bad, while also making Bucky right and Sam wrong for giving up that shield in the first place. John Walker (Wyatt Russell) has now created a moment in Captain America history that will live on forever no matter who wields the shield after him. How the U.S. Government handles this moment remains to be seen.

It’s a moment of shock that in my opinion will be talked about for years to come and Wyatt Russell has been killing it as John Walker and has fully embodied who and what this character is. And while his intentions were “good” at the beginning, he and everyone else knew that him getting that shield and becoming America’s poster boy was not going to end well sooner rather than later. Everyone knew it and the only person who was in slight denial was Sam Wilson and now he’s seen first hand what everyone was afraid of, especially Bucky.

The Falcon and The Winter Soldier has done a great job at showing the dark history of the Super Soldier Program and America’s racial injustices against its Black soldiers and how it views Black superheroes like Sam Wilson. While also shining a bright light on America’s true ideals, intentions, white supremacy, toxic masculinity, white privilege, and entitlement. This episode has also set in motion Sam’s unwanted realization that giving up that shield was wrong. That Steve Rogers chose him for a reason. While also cementing Steve Rogers’s ideals and legacy as the America we truly want and should be.

Steve Rogers didn’t hand him that shield because that was his best bud or because he was Black or any of the sort. Steve Rogers always saw something in Sam that Sam probably didn’t see in himself and it was the potential to not only live up to Steve Roger’s legacy but also uphold those beliefs they have fought for since they first met in Captain America: The Winter Soldier.

The Falcon and The Winter Soldier is streaming now exclusively on Disney+.