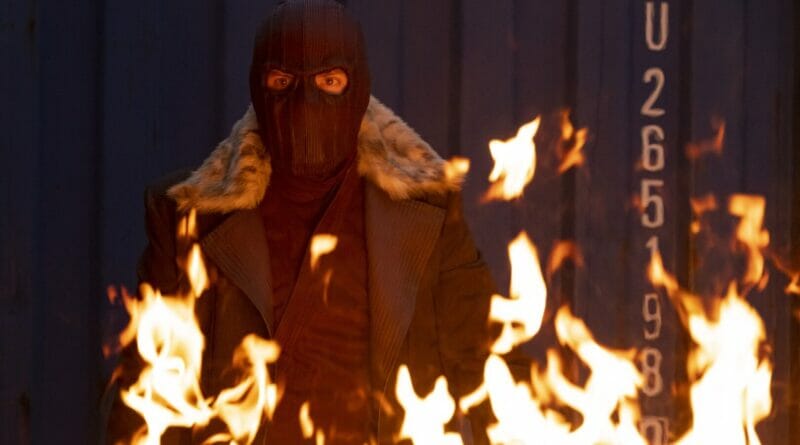 
As we hit the series midpoint The Falcon and The Winter Soldier perfectly balances character depth and plot density once again.

In this week’s episode of The Falcon and The Winter Soldier Sam, Bucky, and Zemo head to Madripoor (yes X – Men elements are slowly being integrated into the MCU) wherein their quest to discover the secrets of the new stable super-soldier serum they meet with Sharon Carter (snarkier and sassier since the snap and life as an outlaw), who may very well have secrets of her own.

The most striking element of this episode is the scarcity of major John Walker scenes, say for one that abruptly demands attention. After being spat at John says to a flag smasher “Do you know who I am”, while dressed in the garb of a symbol, a hero, a title he has not earned. We see at this moment his sharp descent into Egotism, and more importantly, demands for respect and power, whether deserved or not. He stands proud, demanding distinction, and at this moment we see the cliff he peers over, demanding the respect of the great man he will never be.

In sharp contrast to this Sam spends the entire episode without his wings. Yet despite this, he shows himself to be not just a great fighter and man of action, but a hero. The great Tony Stark once posited that “If your nothing without the suit, you shouldn’t have it” and in this episode, Sam shows once again that even when he isn’t flying as The Falcon he is as much of a hero.

Bucky, in contrast to John Walker pretending to be a hero he isn’t, has to pretend to be a villain he wished he never was. To sell a needed lie he spends a significant portion of the episode pretending to be The Winter Soldier. As he adopts this identity again, like slipping a glove on his cold metal hand, he has to confront the PTSD that has defined his life since then.

He reveals that Sam absolving himself of the legacy of the shield by giving it away hurt him so much because if Steve was wrong to entrust his legacy to him if the good he saw in him is wrong, then the good he saw that still lives in Bucky must have been wrong too. Bucky can’t stand such a thought as that is all he has to believe in, the words and memories of a good man.

Sharon is revealed to still be on the run from the events of Captain America: Civil War, as she couldn’t get a pardon like her more famous cohorts. As such she has become a changed woman, life as a criminal for years it seems is the perfect opportunity for a soft character reboot, yet her words and hidden actions seem to show she has more yet to be revealed. As Zemo, Bucky and Sam find the manufacturer of the Super Soldier Serum through Sharon, after getting some information, Zemo shoots him.

Yet Bucky and Sam still drive off with him because they need him. As they sit there driving off, we are forced to confront that the man who drove the Avengers apart, led to Sam and Bucky being enemies of the state and made Bucky face the evil he was forced to become is now a necessary evil. As such the MCU is once more becoming significantly more complex, not just in lore, but emotionally as well. We now have deeply complex and uncomfortable ethical and emotional grey zones inhabited by characters dealing with PTSD, race issues, and legacy after loss.

The Falcon and The Winter Soldier with episode 3 has hit its midpoint and going forward one can see the murky water of morality will only get deeper and filled with waves of woe. Yet comedy born from character and conversation abounds within perfect context, showing that Cap’s legacy expands beyond the characters in the MCU to maintaining the most tonally complex, talented and dense tragicomedy within its larger story.

The Falcon and The Winter Soldier is streaming now exclusively on Disney+.

For more film, gaming, anime, and TV news, trailers, and updates make sure to keep it locked right here at The Nerdy Basement. And while you’re here, consider supporting us on Patreon as well! It’s an easy way of supporting us so we can keep proving you with your Nerdy News!