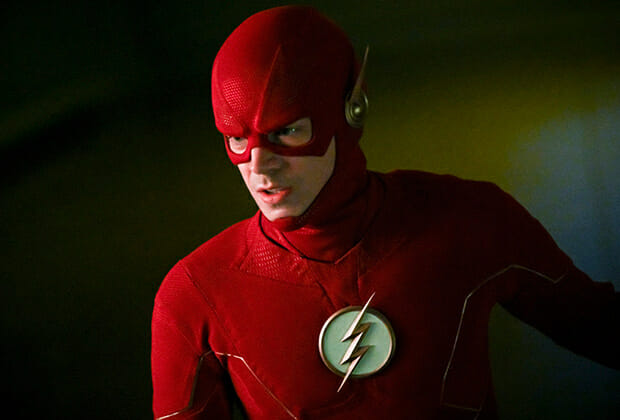 The long-awaited return of The Flash is finally here and it’s felt like an eternity since we have last seen the Scarlet Speedster on our small screens. This season premiere truly felt more like a mid-season finale than an actual season premiere and that’s not necessarily a bad thing. Granted that Season 6 of The Flash ended abruptly due to the current pandemic affecting the part of the world. Let’s dive into this premiere and see where we pick up from where we last left off and see what’s in store for at least the first quarter of this new season of The Flash.

Just as last season of The Flash, we are still dealing with Eva McCulloch aka Mirror Master who has escaped her Mirrorverse thus leaving the real Iris West trapped inside with no way out. The Flash is still losing his speed and is still trying to create the artificial Speed Force. Needless to say that things are rather dire in this premiere episode. We do have some moments that are rather overly cheesy but that’s just part of The Flash at this point and it can be overlooked to a degree.

Nash Wells with the help of Chester and Allegra is trying to find a way to power the fusion core without Nash Wells meeting his demise. This is the biggest challenge the team has to face this week other than dealing with Rosa Dillon aka Top and her plans to essentially bomb the city and getting away with it because The Flash doesn’t have his speed.

There are some rather shocking revelations throughout the episode. There’s a huge one that comes after the end of the episode regarding Mirror Master herself. As for Rosa Dillon aka Top, she reveals to Cecile that she’s been the brains behind the operations when she and Samuel Scudder aka Mirror Master were running rampant around Central City. We also learned that Scudder was created by Eva McCulloch after she initially got her reflective powers.

Iris as I mentioned above is still stuck in the Mirrorverse and still trying to find a way out but is starting to have a mental breakdown. She starts seeing future and past versions of herself in the Mirrorverse who are there to essentially taunt her for her failed attempts at breaking out of the mirror.

As the team back at Star Labs tries to power the fusion core for the artificial Speed Force using Allegra’s powers. She fails to contain the surge of power and Barry ends up getting hit with a blast of energy thus transferring all of the Wells brainwaves into his cerebral cortex thus overloading it in the process. We get some funny moments with Barry imitating the different Wells from the Council of Wells but this bit grew tiresome rather fast.

As Chester and Allegra work on a particle magnet to push all of Wells multiversal particles out of Barry, back in to Nash Wells and then into the fusion core, Wells has a reflective moment with himself and finally accepts his fate. After an emotional exchange while Wells is fusing with the fusion core we a final “Run Barry….run” moment as Barry gains his speed once again and once again saves the day as The Flash.

Now, while I hate to see Wells go, I’m glad that we are done with this gig even if it’s momentarily. I think The Flash as a series has prolonged its dependency on using a version of Harrison Wells to keep Tom Cavanagh in the series as a sort of mentor, no matter how wacky it got, but to also find different ways to keep Barry/The Flash focused and centerd.

This plot thread has been worn thin and I think it’s time to move on. Now the episode goes on to emphasize that while we won’t see Wells onscreen (for now) he is still a part of the team and will be with Barry in spirit. So we’ll see how long we go without seeing a Harrison Wells in The Flash.

As with every episode of The Flash we get a stinger scene. In this scene we see Eva McCulloch once again on the computer watching a video of her getting hit with the dark matter from the particle accelerator. After watching it a few times she comes to a shocking realization that she died on the night the particle accelerator exploded and that her essence was imbued with the mirror in her office. Not only that, but she a mirror copy of her former self.

The implications of this revelation and how they affect things going forward, especially within Eva McCulloch remain to be seen but it also begs to question whether or not the prolonged entrapment of Iris West in this same mirror will have that same affect on her after Team Flash finds a way of breaking her out of there.

The Flash delivered a solid episode for its season premiere and I’m hoping we end this part of of season six (even though it’s now season seven) on a high note before we dive back into Barry’s feud with Bloodwork.