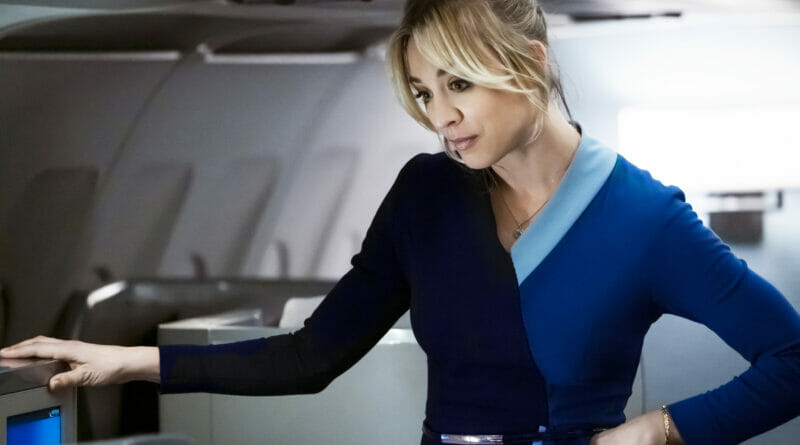 The Flight Attendant Is Fun & Exciting, A Suspense Thriller With Tremendous Emotional Weight


The Flight Attendant is a fun and exciting suspense thriller with a tremendous amount of emotional weight.

The Flight Attendant showcases the incredible talent of Kaley Cuoco who has been unfairly tucked away in sitcom purgatory. Recently having been nominated for two Golden Globes for Best Musical/Comedy Series, and Best Television Actress – Musical/Comedy Series, it is definitely worth a watch, if previously overlooked.

The best part of The Flight Attendant might be the thing that puts many people off of watching it, Kaley Cuoco. After having watched twelve seasons of The Big Bang Theory, I can imagine many feeling Cuoco fatigue. There are very few actors that move on from such career-defining roles (i.e. her former castmates). The fact that her character, Penny, on Big Bang, was static and showed very little growth throughout the show, could have pigeon-holed the actor in type-cast roles for the rest of her career.

It was easy to imagine her appearing on countless sitcom-style network programs for the foreseeable future, playing characters reminiscent of her role on Big Bang. I must say that this was what I expected going into The Flight Attendant, a character with the same amount of range. To be honest, Cuoco isn’t exactly going against type in playing Cassie Bowden. Cuoco is still a party girl, who over drinks and finds herself in improbable situations; however, the writer’s on Flight Attendant have done something Big Bang never did: write a complex character that allowed Cuoco to shine.

Cassie Bowden is such an intricately detailed character whose flaws are nuanced and thoughtfully explored. Her alcoholism can be whimsical, problematic, and heartbreaking all at once, without making light of it. This is a show about an alcoholic flight attendant, who has found herself in bed with a passenger of her most recent flight, played by Michiel Huisman (Game of Thrones, Haunting of Hill House). The only catch is when he wakes up she finds that his throat has been recently slit. Cuoco’s Cassie stumbles through a series of well-intentioned accidents, life-altering coincidences, and miscalculated schemes.

All of which is played for laughs at first, though as we move through the season Cassie becomes more and more unhinged. Her alcoholism is no longer funny, as the real effects of it start bubbling to the surface, and drudge up her past trauma with her father. Due to the early death of Huisman’s Alex Sokolov, Cassie begins suffering from PTSD, which causes her to interact with Alex through fragmented memories and imagined conversations in her mind. This technique is one of the show’s greatest strengths, it allows the viewer to see the vastness of Cassie’s character and to see her insecurities and shortcomings firsthand.

The supporting cast strengthens the show, and rarely do they detract from the show’s focus. Huisman and Cuoco’s chemistry is fantastic, which makes it all the more heartbreaking knowing that the relationship is imagined and cannot last. Jason Jones is amazing as Cassie’s drunken father played in flashbacks as both abusive and charismatic. Zosia Mamet (Girls) and T.R. Knight (Grey’s Anatomy), her best friend and her brother respectively, act as Cassie’s supporters and critics simultaneously, presenting Cassie with both extreme highs and lows throughout the season.

Michelle Gomez (Doctor Who, Chilling Adventures of Sabrina) plays to her strengths as a deviously quirky assassin. It is Rosie Perez’s Megan that seems slightly out of place. Although her plotline is interesting and well-written, its inclusion does not always add to the overall story; though it is through this plotline that opens up The Flight Attendant for an interesting and different season two.

The Flight Attendant makes for terrific bingeing, it is neither too dark and dramatic, nor is it too lighthearted and frivolous. It is a charming show about murder, assassins, conspiracies, alcoholism, PTSD, and family drama. It shows reverence when needed, but doesn’t dwell on the sadness or take an overly depressing tone. The Flight Attendant is not without its flaws and predictability, but these are easily forgiven as the thrilling ride that it takes you on is well worth it.

HBO Max has recently announced that The Flight Attendant will be back for a second season!