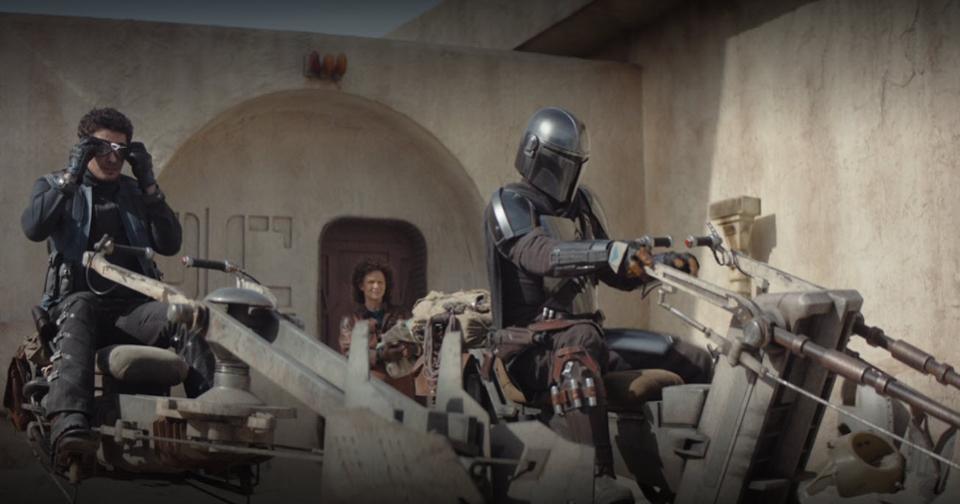 REVIEW: THE MANDALORIAN CHAPTER 5: THE GUNSLINGER


Quick thoughts…..Disney+ and Lucas film are knocking it out of the park with this series. This episodes delivers on everything we’ve come to expect, lots of action, some plot twists, a few easter eggs, new characters and in the end we are still on the run.

Lets talk new characters, Ming-Na Wen most notably known for her portrayal of Agent Melinda May aka “The Cavalry” in Marvel’s Agents of Shield makes her Star Wars debut as Fennec Shand, an elite mercenary of the top crime syndicates including the Hutts. Next we have Jake Cannavale as Toro Calican a bounty hunter hopeful trying to join the Guild. Lastly we have Comedian/Actor Amy Sedaris playing the role of Peli Motto the manager of Mos Eisley spaceport bay Three-Five on the Planet Tatooine!!

The episode starts off with tons of action as our heores, Mando and little baby Yoda, are engaged in a shootout out in space. After some pretty slick evasive maneuvers Mando takes down the bounty hunter’s space craft but with the damage his ship has taken Mando is forced to land for repairs at non-other than the Mos Eisley spaceport on the desert Planet of Tatooine!

Here we meet Peli Motto played beautifully by Amy Sedaris. Mando requests the repairs to his ship are done by human instead of droids because… well we still don’t trust droids. In need of credits to pay for the repairs Mando takes us to yet another iconic location, The Mos Eisley Cantina. Meanwhile Peli meets the adorable baby Yoda and decides she can get more credits from Mando by taking care of the little one and honestly how can you not want to cuddle the little green guy…. he’s so freaking ADORABLE.

At the Cantina we meet Toro Calican a young man looking to make his name as a bounty hunter by taking down a fierce, deadly assassin… Fennec Shand but he can’t do it alone so he enlists the services of Mando. Together they ride off across the Dune Sea, which is a call back to New Hope and Obi-Wan Kenobi. Mando and Toro come face to face with the Tusken Raiders and make a trade for safe passage.

The story progresses and our heroes find Fennec Shand and as you can guess she lives up to her lore. She’s smart and cunning which makes her a formidable adversary but the combined effort of Mando and Toro prove to be too much for her and she is captured. Mando leaves Toro with the captured Fennec and goes to find a Dewback in order to transport the prisoner but this proves to be a mistake as Fennec convinces Toro to betray Mando. Unfortunately this proves to be Fennec’s undoing as now that she informed Toro that Mando is a Guild traitor Toro decides that Mando is the bigger target and will gain him the most recognition.

Mando returns to find that Fennec is “dead” or so it would appear that she’s dead. Mando rushes back to the spaceport only to find that Baby Yoda and Peli have been help hostage, thankfully Toro is a Noob and Mando takes him out easily. Mando hands Peli a bunch of credits for her troubles, loads up Baby Yoda and they head back off world in search of another place to lay low.

The episode ends with a hidden cloaked figure at the site of the double cross, at his feet is the body of the presumed dead Fennec Shand and then we fade to black. We don’t know who this character is, we only know that he seems to be wearing the a cape similar to that of Mando and that his boots possibly have spurs on them….. the only time we’ve heard this sound before was with Boba Fett.

Could this really be Boba Fett? Is Fennec Shand really dead or was she only badly wounded? Only time will tell. All in all this show has been progressing at a great pace, the special effects and script are movie quality and the actors, especially Pedro Pascal, have done an incredible job of making this world and the characters come alive. If you aren’t already watching this show you definitely need to get Disney+ and check it out it’s totally worth it.