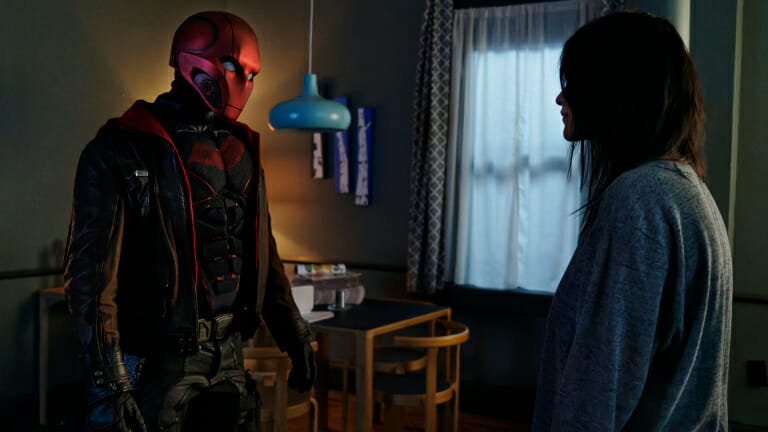 
Titans Season 3 continues building up on the momentum first generated by Red Hood back when the season first premiered but does the episode really deliver? Let’s dive in! — Warning: Major Spoilers Ahead!

After a rather slow episode last week, Titans Season 3 gets back to the action by filling in the gap between Jason Todd’s death and his return as the Red Hood. Despite one minor change from the comics, this revelation, for the most part, sticks pretty close to the source material and answers the questions everyone was asking; at least for those who were actually wondering. How did Jason Todd come back? This week’s episode is titled “Lazarus”, whenever anything remotely associated with Batman has the term “Lazarus” attached to it to any extent we all know it means one thing and one thing only…Ra’s Al Ghul.

Unfortunately, we do not get to see Ra’s Al Ghul but his essence is felt in this episode as the episode features the Lazarus Pit he so famously uses to keep himself immortal and is used by various characters from the DC Universe to bring the dead back to life. Jason Todd is no exception. The little bird might have had his wings broken in a very brutal fashion at the hands of the Joker, I’m sure many viewers cringed a bit when they saw how the Joker destroyed Jason Todd’s face with that crowbar.

But many people, myself included still feel like Jason Todd’s transition into the Red Hood seems a bit rushed and while I hold firm on that sentiment, I would be remiss if I wrote this review and didn’t state that I am thoroughly enjoying what Red Hood has brought to the series in this third season. As I mentioned in my initial review of the first three episodes, Titans Season 3 got the jumpstart that it so desperately needed to keep fans engaged and locked in this season.

Jason Todd has been that charge, and with a much-need improvement in the writing and pacing of the story and introductions of new characters like Barbara Gordon and Jonathan Crane, plus setting the series in Gotham City. It’s all been a remedy for success thus far. However, when it comes to Jonathan Crane aka Scarecrow, he is very dim and dull in what is was shown him being the mastermind behind Jason Todd becoming the Red Hood. Essentially having Red Hood be his lackey and fueling his anger towards his former teammates and his immense fear of dying, Scarecrow is the puppeteer and Red Hood is the puppet.

Where the episode truly shines is in really capturing the essence of Jason Todd/Red Hood, especially in this episode, and by the end of it, it really cements his anti-hero persona that comic book fans have come to love throughout the years. Additionally, this episode really dove headfirst into the mind of Jason Todd and really showed us what makes him tick, it was a nice character study not just for him but how those around him view him, especially Bruce Wayne.

Titans Season 3 has been doing something it hasn’t really done before, giving now just this world but the characters within in it development. Throughout Titans Seasons 1 and 2, things just happened and not much really connected to the bigger picture. It’s that exposition that’s needed for a show like this, for any show for that matter. Especially when the world housing these characters is such a viable character in and of itself. This only makes the characters we are watching that much more enjoyable if they’re properly developed.

In addition, we also get a little backstory to Dick Grayson and while we know his origin like the back of our hands, we haven’t really dived into his psyche and his transition from the Robin who left Gotham City and headed up north to Detroit to become a detective, a founding member of the Titans and then transitioning into Nightwing. Having him back in Gotham City and having to deal with not just leaving members of the Batfamily behind, but the ramifications of leaving that behind. Not just with Bruce Wayne, but also Barbara Gordon who he has a physical and emotional history.

If there’s any disappointment so far with Titans Season 3 is that we haven’t really gotten to see the likes of Jonathan Crane or Barbara Gordon in their prime, prior to where they are at now. Batman locked up Scarecrow and has his mask and fear gas stored in the Batcave, we should be seeing a flashback of sorts showcasing Scarecrow as the iconic villain that he is. Same with Barbara, she’s now a paraplegic and the events of The Killing Joke are referenced but are not seen.

Where we meet Barbara she’s already been Batgirl and Oracle but is now the commissioner of the GCPD. Yet no buildup and no visual context as to how these new characters got to where they are. We haven’t seen much of Raven in Themyschira yet either, we aren’t doing much with Superboy and Gar is just around like a lingering pet. For all its highs, Titans Season 3 also has some lows that can’t be overlooked.

I could be jumping the gun since we’re only just nearing the halfway mark of the season but these are things I’m longing to see. We’ve lost a Titan member in Hawk and another in Dove who moved away because she now has blood on her hands. My main concern is Titans Season 3 falling into the same issues Titans Season 2 ran into where certain characters weren’t developed as much or at all for the sake of a rushed storyline like the one we are dealing with now centered around Red Hood.