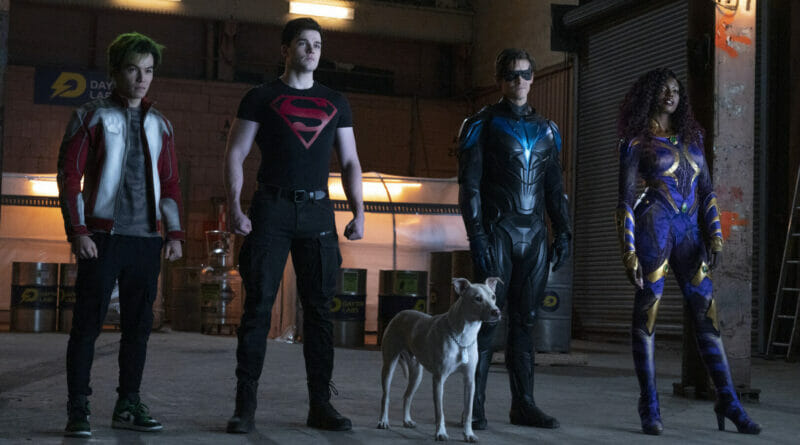 
Titans Season 3 delivered the goods at the start of the season, but despite veering off course, the season finale manages to stick the landing, even if it’s not a perfect one.

Titans has had one of its better seasons since the series’ inception back in 2018. Titans Season 3 introduced us to their live-action iterations of Barbara Gordon/Oracle, Jonathan Crane/Scarecrow, and the live-action debut of Red Hood. The edgy take on one of DC Comics’ favorite teams the Teen Titans or Titans, has been a long-debated topic. Some fans love it, others, not so much. The live-action debut of Red Hood definitely delivered a much-needed hot start to the new season but as the series progressed, the season lost its footing and shifted all of its focus on the lackluster and disinteresting Jonathan Crane aka Scarecrow.

I think it’s best to get this out the way here and now before we fully dive into the rollercoaster that Titans Season 3 was. Vincent Kartheiser’s Scarecrow was the worst thing about this season of Titans. I gave a lot of personal pushback when it came to bringing in Red Hood this early into the series, which rushed the entirety of Jason Todd’s Red Hood arc from dying to being brought back to life, to the mystery of “the man behind the mask”, even to his ultimate redemption and departure from the Bat-Family, it is all rushed. But still all the more interesting than watching Scarecrow impersonate Chucky from Child’s Play for nearly three episodes.

Christopher Nolan’s Scarecrow was more menacing and a more accurate depiction of Jonathan Crane and this was. Nothing about his persona, character traits, “wits” or “smarts” screamed Jonathan Crane. The man didn’t even don his iconic mask which was sitting in the same room he spend 4 whole episodes in. But sure let’s have him slice up his face as an ode to the “no more masks” line. Such a wasted metaphor.

It goes without saying that Titans Season 3 definitely had its moments but a lot of those moments were either short-lived or just completely forgotten about. A huge low this season was Barbara Gordon/Oracle who never truly felt like Barbara Gordon or Oracle for that matter. This was mostly due to her role as the Commissioner of the Gotham City Police Department, essentially following her father’s footsteps. But ultimately, she fell into the damsel in distress trope whose love for her former partner made her lose focus. Dick Grayson/Nightwing also fell into this issue as he focused more on rekindling his love with Barbara Gordon instead of being the better Batman, Bruce Wayne asked him to be.

However, watching the finale you understand why Dick Grayson was taken down this path of essentially losing himself and getting lost in his path of justice, dying, to really cement him as THE Nightwing. Then again, that’s something he should’ve fully embraced in Titans Season 2. The Titans team as a whole, while dealing with the overall “threat” that Jason Todd/Red Hood was under the mentorship of Jonathan Crane/Scarecrow. Were all dealing with their own things, and the majority of them took an entire back seat for the majority of the season, only to be given something to do at the end so the season feels like they ultimately brought the Titans back together.

The way this plays out is not as effective as the writers might’ve thought it would be, as the Titans were never separated. Not internally at least, with the exception of Jason Todd who went on his murdering spree for no real reason (and no, we won’t be using the effects of The Lazarus Pit as a reason for that change). In addition, unlike the comics, Bruce Wayne killed The Joker for killing Jason Todd, which as we all know is the main reason Jason Todd becomes Red Hood and becomes an antagonist to Batman.

Other characters who took a back seat this season were Conner/Super, Gar Logan/Beast Boy, and Rachel Roth/Raven. Conner, despite his SUPER usefulness, was not utilized other than to give Blackfire a love interest. Gar just stuck around the sidelines twiddling his thumbs, partially learning how to transform into a new animal and waiting around for Raven to return from Themyschira. I still feel like Rachel got the shortest end of the stick as she wasn’t really given any real screen time.

There have been rumblings online about on-set issues regarding Teagan Croft’s mother being an issue on the set of Titans hence Raven’s lack of screen time but that hasn’t been officially confirmed by anyone and I’m not too keen to be believing anything that’s “reported” anonymously on Reddit. Do whatever you’d like with that information. Ultimately, I feel like the show itself got too crowded for its own good and the creatives are to blame for that. They often kill off characters, whether they’re heroes or villains, and replace them two times over in the following season.

Instead of giving us the Hawk and Dove spin-off series that was in the works and contractually promised to Alan Ritchson and Minka Kelly. Hank/Hawk is killed and Dawn/Dove is written out of the show. But they turn around and bring back Donna Troy as a central character in the latter half of the season, while also giving Jay Lycurgo more than enough screen time than someone like Teagan Croft. Now, this is no knock against Jay Lycurgo, props to him and his rise from an extra in Matt Reeves’ “The Batman” to the new Robin in Titans. But once again, rushed. He might’ve not become Robin in the finale, but he’s def donning that suit next season.

One of the biggest highlights of the Titans Season 3 finale was the introduction of A.R.G.U.S. and the second tease to Roy Harper aka Arsenal. Now Roy Harper was first teased in the premiere episode of Titans Season 2 but was never mentioned again or teased for that matter until now. There were a few reports in early 2020 that mentioned that an actor was cast as Roy Harper but the actor has yet to be revealed.

Overall for me, despite my long list of negatives and very short list of positives. Titans Season 3 delivered a much better season than it did in its previous two outings. Although the pacing of the season stumbled and got lost along the way, it was also a much better improvement than its previous seasons. That includes all the connective plot points in the narrative in this season that, unlike its previous seasons, seem to get lost in translation and fall through the cracks. So to me, they still managed to stick the landing while setting up what’s to come in Titans Season 4. So there’s a lot of good things to look forward to!