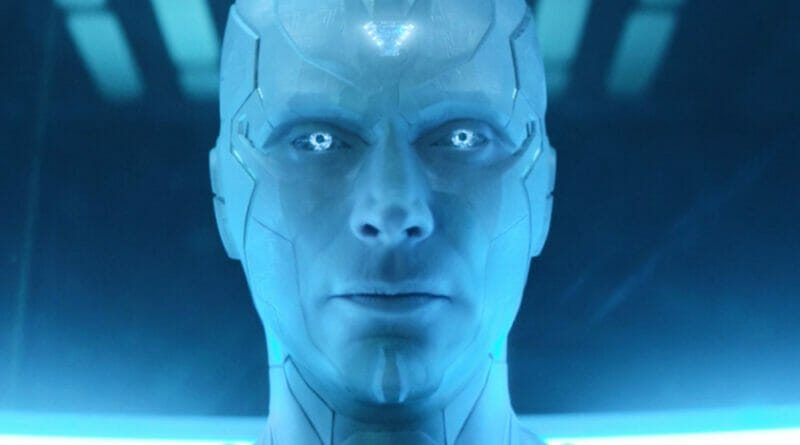 WandaVision takes us a few steps back this week to reveal to us what exactly happened with Wanda prior to her arrival at Westview and how exactly she created his massive hex that has taken hold on all of Westview’s residents. Last week on WandaVision we got the reveal we all knew was coming, Ages the Nosey Neighbor turned out to be exactly what the internet rumored her to be for months and these past weeks, Agatha Harkness.

This week we pick up exactly where we left off in that encounter down in Agathat’s basement as she aids Wanda in retracing her steps to reveal to us how and when we got here. Especially since the series takes place mere weeks after the events of Avengers: Endgame. Before we breakdown and recap what exactly happened with Wanda and what events from the past MCU films we revisit let’s take a moment to talk about Agatha Harkness herself.

We’re taken back to Salem, Massachusetts in a version of the Salem Witch Trials. As we all know from the comics, Agatha Harkness was a witch who was alive during the Salem Witch Trials who was ultimately killed, made a deal with Mephisto, and ended up being his servant and inevitably a mentor of sorts for Wanda Maximoff aka The Scarlet Witch. The way it’s presented in this episode is a version of that just not comic book accurate, and of course, no Mephisto….yet.

But Agatha does end up serving as a mentor of sorts nonetheless throughout this episode as she takes Wanda to revisit some of the most traumatic moments of her life. We finally get a first-hand perspective of the night Wanda’s parents were killed which also serves as a nod to Avengers: Age of Ultron (we get a lot of those throughout this series). We another nod to Avengers: Age of Ultron when we revisit Wanda being experimented on by Hydra in Sokovia.

We see how Wanda shows a short display of power prior to coming into full contact with the Mind Stone which unlocks what is essentially her X-Gene, thus foreshadowing her future as the Scarlet Witch in the process. Agatha calls Wanda the Scarlet Witch by the end of this episode which marks the first time in MCU history that Wanda is referred to as her comic book counterpart. What I’m hoping is that this foreshadowing of Wanda in full Scarlet Witch costume, cape, and tiara included is how she will be presented in Doctor Strange in the Multiverse of Madness.

We then revisit the Avengers Compound during Captain America: Civil War, in which Wanda is being kept in hiding after the events that transpired in Lagos, Nigeria which left countless civilians dead and the unseen start of Wanda and Vision’s bond. The icing on the cake to both of these references is that we now know why this series focused so much on sitcoms. Watching sitcoms was an escape from reality for Wanda ever since she was a little girl.

It’s something she did with her parents and Pietro every night in order to work on their English speaking skills in what we can only presume was an attempt to move out of Sokovia for a better life that was otherwise filled with war and poorness. She further copes with the loss of her brother this way too as seen in the scene from Captain America: Civil War. It all comes full circle and explains the sitcom themes surrounding the majority of the season. Being in a sitcom was her escape and her happy place.

In the earlier episodes of WandaVision, we met Acting Director of S.W.O.R.D., Director Hayward who’s been deadset on taking Wanda out of the picture and recapturing Vision. According to Hayward, who’s been a bit shady since his introduction. Wanda broke into a S.W.O.R.D. facility and stole Vision’s body thus locking him inside the hex and bringing him back to life.

Turns out that was all a lie. After the events of Avengers: Endgame, Wanda found out (they don’t explain how she just knows) that Vision’s body is at a S.W.O.R.D. facility. She arrives there asking for Vision’s body back so she can give a proper funeral. Sadly for Vision, he didn’t get a funeral either, but neither did Black Widow so there’s that.

After being shown Vision’s body, which has been severed and separated. We see the shady Hayward enticing Wanda and planting the seeds in Wanda’s mind to attempt to bring Vision back. While she does break into the containment room in which the S.W.O.R.D. scientists are working at. She does not take Vision’s body. Instead, she tries to feel his presence, which she doesn’t.

After leaving the facility, Wanda heads to Westview to an empty plot of land with a partially built foundation of a house. She pulls out a property deed to reveal that she and Vision bought a home together and were building it up from scratch. This sends Wanda into an emotional and mental slip, as we see in House of M and that unleashes her Chaos Magic which allows her to created and/or warps reality at will. Thus making her extremely dangerous and both Director Hayward and Agatha Harkness mention.

We still don’t really know what Agatha wants with Wanda or why she needed to know how exactly Wanda created this hex. We also don’t know what she plans on doing with the children as the episode ends on a cliffhanger. Sadly for WandaVision, which ends next week (or so we think) hasn’t really answered all of the questions it’s presented in throughout this series.

We know WandaVision is leading us directly into Doctor Strange in the Multiverse of Madness but what we need WandaVision to do is stick the landing for its own story and not lose itself in the process of setting up with to come with Doctor Strange and later in Spider-Man: No Way Home.

WandaVision has been such an innovative and creative risk even for Marvel Studios despite their track record of taking big risks and having them pay off. But not sticking the landing here in WandaVision would be a detriment to the entire series. This does not mean I’ve lost all hope in the series or that I’m no longer enjoying myself. We just need answers at this point. Especially when watching Doctor Strange in the Multiverse of Madness later this year is not guaranteed.

With all that being said, however, we do get another mid-credit stinger in the form of White Vision. WandaVison over the course of the past three weeks has slowly peeled back the layers of Director Haywards plans which I personally thought was him trying his ultimate best to bring back Ultron, hence why he wanted Vision’s body so badly. But seeing him find a way to piece Vision back together and give us White Vision, things will certainly get interesting in the next episode (or two). We’ll have more on White Vision in another piece.

WandaVision is streaming now on Disney+.