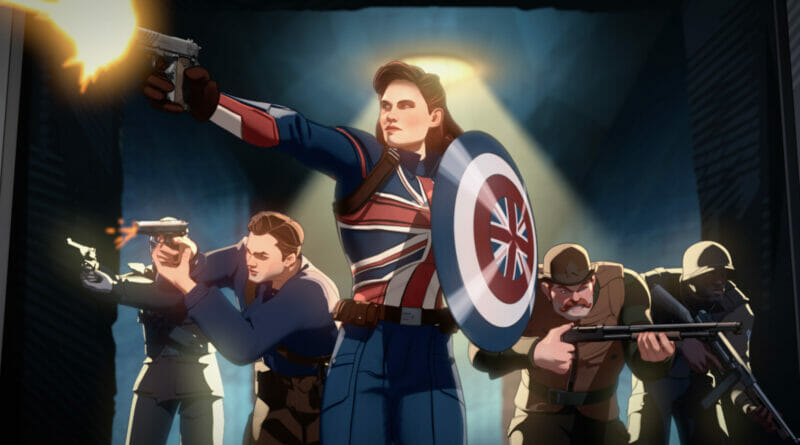 “What If…?” Episode 1 Review: An Ambitious and Welcomed New Addition To The MCU Canon!


The MCU has fully embraced the multiverse and if Loki wasn’t enough proof of that, Marvel Studios’ first venture into animation definitely sets the stage for a full exploration of the Marvel multiverse. With just one question, “What If…?”, Marvel Studios sets the stage to explore the infinite possibilities and implications of the Marvel Cinematic Universe when one simple decision changes the outcome of events as we know it.

Marvel has been hinting at the multiverse since Doctor Strange’s live-action debut in 2016 and the question still remains “who are you in this vast multiverse?”…”What If…?” is here to answer those questions all through the lens of Uatu, The Watcher voiced by the ever so talented Jeffrey Wright. First up is fan-favorite Peggy Carter, one of the founding members of S.H.I.E.L.D. and Steve Rogers’ love interest. The question here is “What If…Captain Carter Were The First Avenger?”. One simple question is answered in a multitude of ways and has vast implications on not just the titular character but those around her as well.

In its premiere episode, “What If…?” sees Peggy Carter taking the Super Soldier Serum instead of Steve Rogers thus making her the first-ever Super Soldier and eventually the first Avenger. While Steve Rogers doesn’t become the first Avenger or Captain America he instead becomes the first iteration of Iron Man, decades before Tony Stark is ever born, decades before he is ever captured by the Ten Rings and before he builds the Mark I Armor inside of a cave with a box of scraps.

Where “What If…?” truly shines is in its animation which looks much smoother and cleaner in motion and action than it did in any of its promotional still images. There are times that the mouth movements don’t entirely match the voice behind it and while it’s quite the nitpick, it can be a bit distracting when watching characters speak for a long period of time. I found this to be more of an issue with Captain Carter than with any other character. Even though there are times it happens with Steve Rogers and Bucky. Nonetheless, the animation flows very well.

The biggest setback of the entire episode is that it felt like an overly crammed version of “Captain America: The First Avenger”. I can appreciate all the homages and all the parallel shots giving us more of the same just with a different character or perspective but it all just flowed about the same and an extra few minutes would’ve been a huge benefit for the episode. Just was too much plot to cram into 25 minutes, especially when this specific episode of “What If…?” isn’t getting a follow up anytime soon, even though we’ll see more of Peggy Carter in What If…?’s future seasons, and most likely in Doctor Strange in the Multiverse of Madness.

The episode ends with Captain Carter making the ultimate sacrifice, just like Steve Rogers did in the live-action film but instead of being frozen for 70 years, Captain Carter is transported 70 years into the future to the events of The Avengers (2012) where she exits the portal (in which Loki appeared from) and meets Nick Fury and Clint Barton/Hawkeye. Making Captain Carter the First Avenger.

Now that we have witnessed what the Marvel Cinematic Universe would be like if Captain Carter became the First Avenger, we can look back and ahead and theorize on the results of this specific scenario. The first being Howard Stark building the Hydra Stomper, making Steve Rogers the first Iron Man, which will also become a precursor to Tony Stark not becoming Iron Man during the events of Iron Man (2008). As we’ve seen in the trailers, Tony Stark is saved by Erik Killmonger thus preventing the traumatic events that lead to the birth of Tony Stark’s Iron Man.

Bucky Barnes not falling off the train, not being captured by Hydra, and not being turned into the Winter Soldier. This episode poked fun at Bucky’s traumatic events from the film that lead to him become the Winter Soldier. A life that was filled with grief, resentment, sadness, and horror is no longer a reality for Bucky. Instead, he gets to live his life out alongside his best bud, Steve Rogers.

Looking ahead, however, we can speculate about Captain Carter’s experience in the MCU in Steve’s place. How differently do things turn out now that she’s in Steve’s shoes, literally and metaphorically? Will Captain Carter ever wield Mjolnir? How will she fare against Thanos? All we can do is ponder the simple question…What If…?

Overall, the premiere episode of “What If…?” was just ok. It didn’t exceed expectations nor did it fail entirely. There’s huge potential here and I am excited to see how the rest of the season turns out. Especially with how they move these new characters like Captain Carter into live-action.