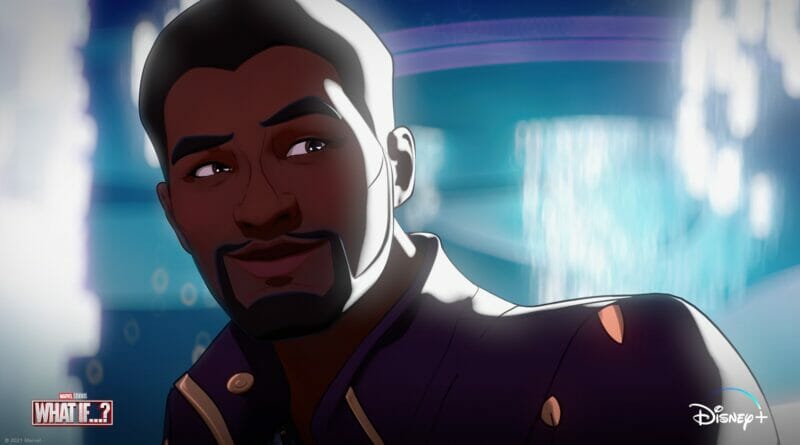 “What If…?” Episode 2 Review: What If T’Challa Became Starlord?


A beautiful and heartwarming message was told in this episode of ‘What If..?’ and that message is being a good person goes a long way.

A beautiful and heartwarming message was told in this episode and that message is being a good person goes a long way. In terms of the MCU in this specific timeline, it can project and influence people all through the universe giving the right opportunity. Don’t worry we will go through all the different ways our beloved T’Challa did just that.

First off rest in peace to the incredible Chadwick Boseman who was taken too soon. His work on and off the screen will never be forgotten. In ways and I’m sure many of us feel this way, his T’Challa character seemed to be very similar if not almost the same to Chadwick’s actual character. It gave me chills hearing him voice T’Challa again and this was a wonderful way to send him off in a sense.

This episode opened up the multiverse even more and it was unique and was pretty great if you ask me. I felt the pacing was far better than last week’s even though no matter what it’s pretty difficult to condense a movie into a 30-minute episode and it seems to be the theme thus far with the “What If” Series.

I do hope they take a different approach with other episodes because again it’s hard to condense a movie into 30 minutes or so.  Nevertheless, this episode just made me want more from this timeline. This episode asked the question “What If T’challa became Star-Lord?” and dare I say T’Challa does it better than Peter Quill? He was the Star-Lord Peter Quill always wanted to be.

However, this iteration of Starlord is vastly different. Different because T’Challa is also a very special human being in his own right and has the best of the best leadership skills and pretty much has the highest emotional intelligence as an MCU leader we have seen. His abilities both physical and emotional definitely stayed with him in this timeline as if they were embedded. His leadership skills were felt all through the galaxy and in this timeline it’s not just in Wakanda which again helped make this universe a better place.

He’s like that General Manager we have always wanted. It is explained that it was a mistake that the Ravagers picked up T’Challa due to Yondu outsourcing the recruitment job to his men as opposed to him doing it himself as he did in the Guardians of the Galaxy film. It’s important to also mention that The Ravagers brought up the fact that the largest amount of cosmic energy on Earth was coming from Wakanda which obviously makes sense as to why they arrived there. This episode did what last week’s did and re-painted an MCU movie.

We immediately see the difference when we revisit the opening scene of Guardians of the Galaxy (2014) and Korath turns out to be a huge fanboy of T’Challa Star-Lord and ends up joining the Ravengers. We see the strong bond between Yondu and Star-Lord and how T’Challas Star-Lord has even made an impact on Yondu and the Ravengers. The Ravagers turned a new leave and they are now good and Yondu essentially says they now steal from the rich and give to the poor and they even mentioned how they were taking after Robinhood.

In this timeline, Star-Lord’s leadership shines so much that even big daddy Thanos also turned straight and became good and is a member of the Ravagers. One of the coolest things from the episode was us as the audience getting the outcome, we all tried to present to Thanos through the screen which was why not just allocate the damn resources you think the universe lacks in a more peaceful way. Thanos admits it was T’Challa who convinced him otherwise. Okay, can we all take a moment here and acknowledge that Thanos was just a freaking awesome funny bro in this episode?  Even the jokes and the chemistry amongst this version of Ravengers were really great.

We also get a look at this timeline’s Nebula who seems to be more at peace having a healthier relationship with her good old dad. The catalyst of this episode is when Nebula explains what they need to do to help save other planets and that’s to retrieve the Embers of Genesis. The Embers of Genesis can help rebuild vegetation essentially saving dying worlds and can even stop galactic hunger and so forth.

It even turned the lifeless head of a celestial into a more prominent lively place. But in order t to retrieve this they must go through The Collector, Taneleer Tivan, who seems to be the big bad in this universe along with his security team The Black Order– Proxima Midnight, Cull Obsidian, Corvus Glaive, and Ebony Maw.

The Heist is underway and to be honest I was not a huge fan of this iteration of the Collector. It seemed to be more of an actual comic book accurate portrayal but something just felt off with his character to me. So many easter eggs are presented in the final act in which a fight breaks out between The Collector and Star-Lord and Yondu and we can do a whole breakdown on that alone. From Dark Elves to Howard the Duck there is so much to explore. It’s clear that Star-Lord has kept a unique and true connection to his home and his father and he was always meant to return someday.

Star-Lord would have returned earlier if it were not for Yondu trying to protect him and keeping Wakanda’s existence from Star-Lord. The episode has a beautiful and yet also hilarious ending that really hit my heart in which Star-Lord aka T’Challa returns home with his Ravagers. To Thanos trying to state his genocide argument again, to Korath harping on himself being Star-Lord’s best friend this episode overall combined humor and drama in the best way.

I would like to acknowledge that the last time T’Challa saw his father he was saying goodbye and in this episode, he was saying hello again. All in all, it was a great episode in which Chadwick’s Star-Lord storyline carried the plot. You know I read that Chadwick was one of the first MCU actors to raise his hand to participate in “What If?”.

It makes sense because this man was so loyal to his work, to this character, to us fans, despite everything he was going through he remained strong and did what he loved. Marvel ended the episode with this quote which I love and I will conclude with it as well. “Dedicated To Our Friend, Our inspiration, And Our Hero, Chadwick Boseman”