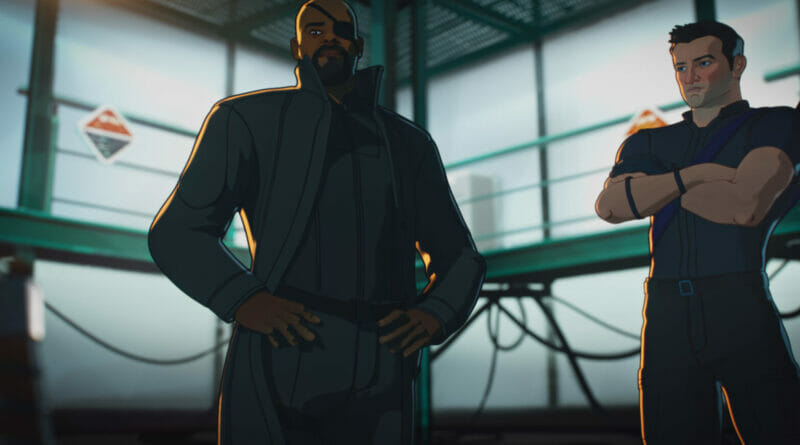 
Nick Fury’s Big Week Takes A Dark Turn In This Week’s Episode of “What If…?” — Warning Major Spoilers Ahead!

The third episode of Marvel Studios’ “What If…?” is here and it takes us on a crazy train ride in what is famously known as “Fury’s Big Week”. This time, however, things take an incredibly dark turn as each member of the would-be Avengers is killed one-by-one. “What If..?” still has the recurring theme it’s had since its premiere, which is rethreading events from past movies just from a different perspective and with more or less a totally different outcome. And while this week’s episode does more of the same, it also brings forth something totally new with its new version of the villain known as Yellowjacket.

This episode wastes little time in getting the ball rolling and setting up its mystery with the death of Tony Stark/Iron Man. Who, by the way, it’s presented, is accidentally killed by Natasha Romanoff/Black Widow. Due to SHIELD’s protocols, Natasha Romanoff/Black Widow is arrested and on her way to prison. Knowing that Natasha Romanoff isn’t the actual killer, Fury tasks her with a secret mission…get new information on this antidote and see who or what has tampered with it, that way we can find the person responsible for the death of Tony Stark.

We then jump to the events of the first Thor movie where we see Thor infiltrating the newly formed SHIELD perimeter housing Mjolnir. Just like in Thor, we see Thor reaching for his hammer while Clint Barton/Hawkeye is aiming at him with his bow and arrow. Just as Thor is reaching for his hammer, Hawkeye fires his shot and ends up killing Thor (not sure why that’s all it took given that he is a God and has suffered much worse and still managed to survive but I digress).

Just like Black Widow, Hawkeye is taken into SHIELD custody and as Nick Fury goes to interrogate him we learn that he too has been mysteriously killed. Adding more credence to Fury’s theory that someone with a connection to SHIELD is killing off his Avengers candidates. In one of the boldest moves in Marvel Studios’ long MCU history, they find a way to fully make the events of The Incredible Hulk cannon to the MCU.

The events of The Incredible Hulk and whether or not it’s canon to the MCU have been a hotly debated topic for the past decade. However, Marvel Studios has been slowly but surely reassuring fans, both those who are fans of The Incredible Hulk film and those who aren’t, that this film and its events are indeed canon despite The Hulk not having a solo film ever since that film first released back in 2008. In addition, we see Betty Ross return once again, and make tie things fully, we get the return of Mark Ruffalo who lends his voice for this past version of Bruce Banner who was once played by Edward Norton.

Seeing Mark Ruffalo reprise his role of Bruce Banner even if it’s a version of that character he didn’t originally play prior to the recast for The Avengers (2012) was a delight. This only adds more hype and excitement to “Shang-Chi and The Legend of the Ten Rings” who will see The Abomination make his live-action return with a more comic book accurate look. As well as get fans excited for the upcoming “She-Hulk” Disney+ series which will see Mark Ruffalo reprise his role of Bruce Banner/Hulk again, alongside Tim Roth who will be reprising his role as Emil Blonsky/Abomination.

The mystery of the episode keeps on building as Bruce Banner/Hulk is shot and ultimately killed, despite not being able to die. While this is all going on, the God of Mischief himself, Loki, has now arrived on Midgard and is on the hunt for Thor’s killer. Loki declares war and conquering Earth if Thor’s killer is not brought to him by the next morning. Here’s we also see the return of Jamie Alexander as Lady Sif, the Destroyer armor, and The Warriors Three, despite the trio not having any actual dialog.

Natasha, still on the hunt for the culprit has now found new information on the potential killer. After digging through some SHIELD files she comes across a potential suspect, a person who has been dead for the past two years. Before we get any information on who this might be, Black Widow is attacked and ultimately killed but not without leaving Nick Fury a clue as to who the murderer could be.

With nowhere left to look, Fury contemplates calling up Carol Davers/Captain Marvel to finish the job but not until Black Widow’s final message to him gives him a different idea. Fury meets with Loki and then shows up at Hope Van Dyne’s resting place. It is here that the mystery is finally revealed and Hank Pym, famously known as Ant-Man and as a founding member of SHIELD, is the villain Yellowjacket and the man responsible for killing Tony Stark, Clint Barton, Bruce Banner, and Natasha Romanoff.

After a brief fight, Hank Pym is ultimately stopped and he reveals to Nick Fury why he went on his murdering spree. Blaming Nick Fury and SHIELD as the ones responsible for the death of both his daughter Hope Van Dyne and his wife, Janet Van Dyne. Pym wanted to make Nick Fury feel his pain by killing off each and every one of his Avengers Initiative candidates. Ultimately wanting to stop Nick Fury and SHIELD from selling pipe dreams to their agents and ultimately leading them all to their death, in other words, as Pym says, he wanted to save the world from men like Fury.

After Hank Pym’s capture, we cut back to New York City, New York where we see Loki holding a press conference at the United Nations seemingly revealing that he has conquered Earth and is now, here, to fulfill humanity’s destiny…enslavement. Which all falls in line with what he wanted to accomplish in the first Avengers film. Now that the Avengers Initiative is quite dead (no pun intended), Agent Coulson believes this is the end of that goal but Fury has a backup plan as per usual.

As we’ve heard throughout the entirety of the MCU, the Avengers Initiative was just an idea and that’s what it always will be, but his heroes will be found; and he finds them in Carol Danvers/Captain Marvel and Steve Rogers/Captain America who at least in this reality are the First Avengers.

“What If…?” was off to a rough start which came off as Marvel Studios playing it a little too safe. Last week’s episode which gave us Chadwich Boseman’s final performance as T’Challa really started elevating the show’s narrative and its true potential at delivering some really compelling stories based on one simple question. This week’s episode takes that and flips it on its head and gives us all the unexpected with the deaths of the prominent Avengers members we’ve come to love over the past 11 years, and Hank Pym as the villain Yellowjacket.

This week’s episode of “What If…?” if anything has now proved and cemented itself as a must-watch series in the MCU and not just for the sake of it connecting to the broader MCU, which will see these new animated versions of characters make their live-action debut at some point but just as good original series that shows that Marvel Studios can still flex their muscles and tell a good story, without getting stale, which is something many fans were worried about with the MCU going forward.

Marvel Studios’ “What If..?” is streaming now exclusively on Disney+.