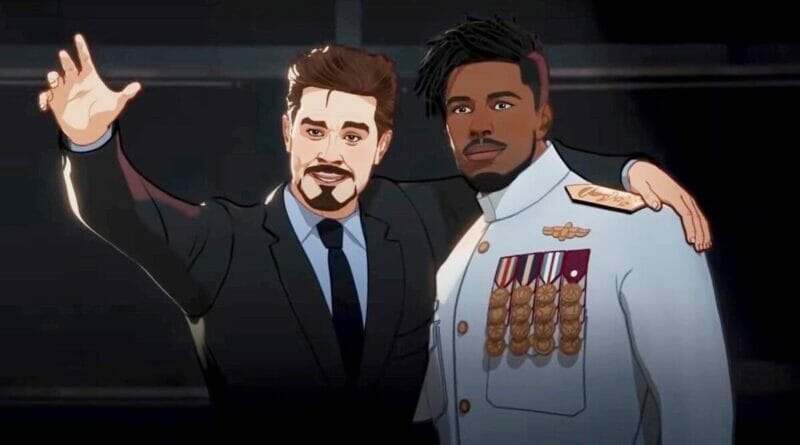 “What If…?” Episode 6 – What If…Killmonger Rescued Tony Stark? (Review)


Micheal B. Jordan returns as Killmonger in this week’s episode of “What If…?” and he once again shows why he’s one of Marvel’s greatest villains!

In the episode of “What If…?” Erik Killmonger befriends Tony Stark after rescuing him in Afghanistan. His actions cause this reality to differ from the original MCU timeline. With Tony being saved from the Ten Rings, he does not become Iron Man. The Avengers likely never form. Tony never makes the ultimate sacrifice. As for Killmonger, he is successful in an elaborate plan.

The episode starts the same way as Iron Man (2008). After the ambush, Tony Stark is near one of his bombs. Seconds before it explodes, Killmonger shows up and saves him. Killmonger then shoots down some enemy soldiers as he and Tony walk off. Tony then praises the actions of Killmonger at a press conference. While receiving his security promotion, Killmonger reveals that Obadiah Stane was behind Tony’s near assassination. During the celebration, Pepper Potts feels that there is something off-putting with Killmonger. She expresses this concern with Happy Hogan, but it is dismissed.

Later, Tony shows his lab to Erik. They even talk about the visions of their late fathers. This inspires the pair to work on a project called “Liberator” for the latter. As they build the tech, Erik tells Tony that they should use Vibranium. We get a call back to Iron Man 2 (2010), as they use Erik’s ring to find more of the material.

Ulysses Klaw is brought up in the conversation, playing the same role. Tony and Erik send Rhodey to South Africa to get the Vibranium. Klaw and his men are then ambushed by the Black Panther. T’Challa assures Rhodey this is not his fight. However, the pair are attacked by Killmonger using Tony’s tech. He kills his cousin, then Rhodey, and frames T’Challa for killing Rhodey. The United States now has beef with Wakanda.

Returning to Tony, Killmonger is confronted by his friend. With the help of J.A.R.V.I.S., Tony finds out the truth. He then sends the first liberator bot after Killmonger. Armed with a Dora Milaje spear, Killmonger takes out the bot. He then stabs Tony and tells him that about his markings. He expresses disappointment because he did not want to Tony be a part of it.

Pepper then grows more concerned about Killmonger. General Thaddeus Ross defends Killmonger from the accusations. Ross also reveals that all of Tony’s properties are owned by the military. He wants to take down Wakanda with the liberator bots. Killmonger is the head of this but has something else up his sleeve. Klaw then sees the work Killmonger did. While Praising Killmonger, Erik shoots Klaw point-blank. Much like the original timeline, he brings the deceased body to Wakanda. Everything plays out similarly just like in Black Panther (2018). The only difference is that King T’Chaka welcomes his nephew.

Killmonger then tells his family about the oncoming attack from America. Yet again, we get a similar shot from a past MCU event. This time this resembles Avengers: Infinity War (2018). Queen Ramonda prepares the Dora Milaje as their general. Everyone is ready to do battle as Killmonger, T’Chaka, and Shuri look on. However, the bots stop in the force field of Wakanda. Killmonger then discreetly reactivates them and the forces go head-to-head.

Killmonger joins the fight. Okoye, Ramonda, and the Dora Milaje scream “For T’Challa”. This emotional moment powers the group to take out the liberators. We then get the familiar shot of uncle and nephew looking at the sunset in Wakanda. Expressing that he wants a prominent role there, Killmonger then becomes the new Black Panther.

While receiving his abilities, he speaks with T’Challa in the Ancestral Plane. Even though he’s being confronted, Killmonger expresses no remorse. Later, Pepper is greeted by Shuri in Tony’s old office. She knows that Killmonger is evil too. This sparks a new alliance, dedicating to taking down Killmonger.

“What If…?” did not disappoint with is episode. Once again, Killmonger stole the show! Micheal B. Jordan shows why he’s my favorite MCU villain of all time! This long plan playing out the way he intended was excellent! From fooling Tony to the U.S. government and even Wakanda. The man was untouchable. Ross defending Killmonger was not surprising and continued to make the story really good. Pepper and Shuri’s tag team is so unique, I want a part two for this episode. Also, I loved that we got here from Chadwick Boseman’s T’Challa again. We know this series is the last time we see him in the role. It is always a gift to see him in the iconic role.