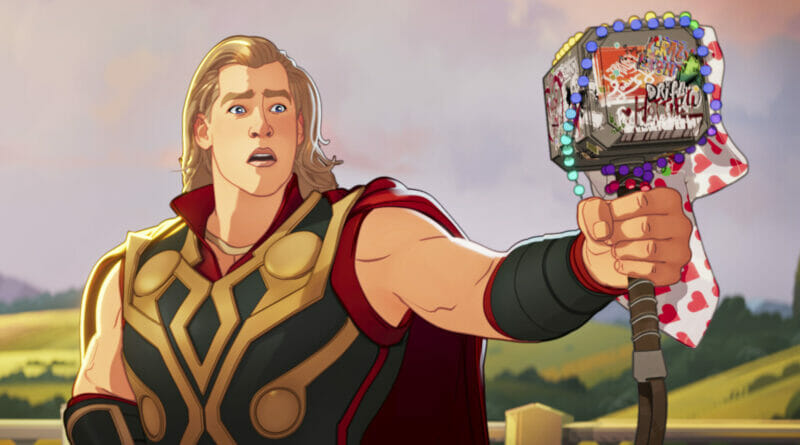 “What If” Episode 7 – What If…Thor Was An Only Child? Review: The Party Prince Has Arrived


Marvel just shot their shot with this type of episode! We have seen Marvel dive into different genres for example their spy type thriller with Captain America and the Winter Soldier, a family type movie with Antman, the sitcom approach with Wandavision, we saw the recent Hawkeye trailer that is going for that classic Christmas vibe and we hear that they will head into the horror genre with Multiverse of Madness and so much more. But I never thought they would head into the party genre and try and pull off their version of Project X. If you have never seen project X it’s basically the greatest party movie in my opinion next to American Pie.

To say the least, they throw a rager, and not just any rager! I don’t know about you but I appreciate a good party. I enjoyed this episode so much and it might be my favorite episode so far but yet I feel bad about that! I am not saying it’s the best episode thus far just perhaps my favorite. It was so different and random and fun and a nice change from the dark undertones that have been presented in so many recent Marvel projects. The big bad of this episode was Thor’s partying and the hero? Let’s get into it!

In this episode, The Watcher explains that in this timeline when Odin found the Frost Giant baby we came to know as Loki he returned him to Laufey the King of the Frost Giants which not only solidified peace between the two races but fundamentally changed so many outcomes due to the strong bond Thor and Loki had despite their differences. We start off in New Mexico just like the original Thor movie where Jane and Darcy are conducting research and they come across the Bifrost gate shooting past them and not into them in this timeline.

Before we start to party, Thor and his mom Frigga are next to Odin as he falls into the Odin sleep. Things are much more chill in this timeline and Frigga goes to visit her sister and explains to Thor that he should study and practice being a king and TO NOT THROW A PARTY. Clearly, she knows Thor is a party animal. Thor being an only child was not tested in the way he was with growing up with Loki in terms of both him being directly challenged as well as the attention that was given. Thor was most certainly spoiled and was that bro in high school who always threw parties when their parents were away. Yes, this Thor is much more carefree and seems to kind of work hard I guess but definitely plays harder.

Back to things being more chill, it appears Thor has been hopping around the galaxy throwing ragers and almost everyone is getting along and going to these parties. Never underestimate the power of a good party. That beam that flew across Jane in New Mexico actually ended up going right to Vegas (of course) where Thor tries to throw one of the biggest intergalactic parties the universe has seen. Jane and Darcy make it to Vegas and everyone is there.

We have Howard the Duck, Nebula, Drax, some Skrulls and so much more. Honestly, I got really jealous I was not there nor that I had not been to a party of that magnitude. The theme of science and magic being one in the same plays into this episode and Jane and Thor do not shy away from showing us that.

We wake up in a hangover-type situation and S.H.I.E.L.D. is knocking on Jane’s hotel room door. Little do they know Thor, Rocket aka the Rabbit (Avengers: Infinity War reference) and a bunch of others are in that room. Agent Rumlow of all people bash on the door and eventually, Maria Hill comes to the door as she is currently the acting director of S.H.I.E.L.D. Where is Nick Fury you ask? Well, Korg tossed Nick Fury like a rag doll earlier in the night in order to do a cannonball in a Vegas fountain and knocking him out cold.

Jane and Darcy go with S.H.I.E.L.D. who are trying to figure out how to stop Thor’s partying which is doing damage all over the world. Surtur is playing limbo by himself for hell’s sake underneath cable wires. The parties are causing madness all over the world from power outages to floods and more (just signs of a good party if you ask me). One of the best moments from this episode was seeing Loki arrive with his “ice bros” and how close he and Thor were “brothers from another mother”. How ironic. They have such a great welcoming it was actually really touching to see these two interact like this.

Nevertheless, in this timeline, one thing remained the same and that was Captain Marvel. Captain Marvel is beeped to save the earth and break up the party. She arrives and tries to do just that but not before we have a little fun seeing Thor and Captain Marvel go at it. Something fans have long been waiting for considering there seemed to be a bit of a friendly rivalry formed between Chris Hemsworth and Brie Larson. Both are grouped into the conversation of who the strongest Avenger is so it was great to see. Round one ends with a draw and Captain Marvel being declared a party pooper and no one likes a party pooper.

We wrap up this episode with a  potential round two between Captain Marvel and Thor but not before Mama arrives! Frigga the badass she is intercepts Thor and almost catches him and his partying. She also potentially saved him as Captain Marvel stated she was going to unleash her full power on him. Frigga warns Thor she is on her way back and Thor is panicking and so are all the intergalactic partiers. They all seem to know you don’t mess with Mama Frigga. It was nice to see Frigga again in this light as I was always a fan of her character and never felt her true potential landed but came close in Avengers: Endgame.

Jane and Thor’s relationship looks to take a turn for the best in this timeline and it makes sense as Thor is not as occupied with Avenger-type things. We end this episode, well you will just have to watch and see! Big cliffhanger. All in all, I thoroughly enjoyed this episode and it was just cool and fun to watch. Not the best thus far just my favorite. In this crazy world, I feel as if sometimes we all have to remember to step back, relax, and just enjoy life. Maybe even party here and there!

Marvel Studios’ “What If…?” is streaming now on Disney+.