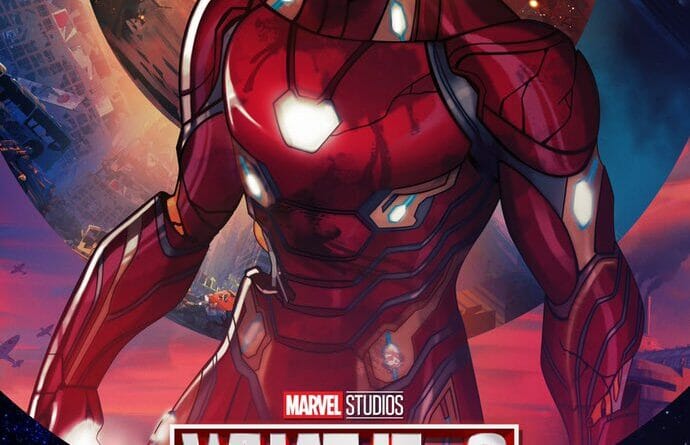 
What If…Zombies!? shies away from ever truly going as dark as the comic book storyline it is adapting making it one of the weaker episodes from the series since its premiere

This week’s episode of Marvel Studios’ “What If…?” animated series finally brought forth an adaptation of the hit comic book storyline “Marvel Zombies” written by Robert Kirkman and illustrated by Sean Phillips. As with any other episode of “What If…?”, Marvel is rethreading another storyline from the live-action side of the MCU and this week we are revisiting the events of Avengers: Infinity War, but instead of having to deal with an invading Black Order and the Mad Titan Thanos, we are dealing with the Undead Avengers.

We kick off this episode with Bruce Banner’s crash landing in the Sanctum Sanctorum as seen in Avengers: Infinity War. However, Banner is not greeted by Wong or Doctor Strange. As he leaves the Sanctorum he runs into Cull Obsidian and Ebony Maw of the Black Order until they are attacked by a zombified Tony Stark, Doctor Strange, and Wong. Right as he is about to meet his demise, Bruce Banner is saved by Hope Van Dyne aka The Wasp, and Peter Parker aka Spider-Man, voiced by Evangeline Lily and Hudson Thames respectively.

Here we learn about the zombie outbreak and what caused it. Just like in Ant-Man and The Wasp, Janet Van Dyne is trapped in the Quantum Realm. Hanky Pym, much like in the live-action film, travels to the Quantum Realm to save Janet but finds his long-lost wife now zombified due to a parasitic virus from the Quantum Realm, thus causing her to become a zombie. In turn, Hank Pym himself becomes a zombie and all hell breaks loose and he is yet again responsible for killing The Avengers and turning them into zombies.

A quick “how to survive the zombie apocalypse” montage introduces us again to Kurt from Ant-Man and Ant-Man and The Wasp (voiced by David Dasmaltchian), Okoye (voiced by Danai Gurira), Sharon Carter (voiced by Emily Van Camp), The Winter Soldier (voiced by Sebastian Stan), and Happy Hogan (voiced by Jon Favreau). Here the collective team hatches a plan to head down to Camp Lehigh, New Jersey, a former SHIELD operations base (it’s first operations base to be exact) as they try to answer a beacon call with an encrypted message and try to find a cure for the zombie outbreak.

Before heading to New Jersey, the team heads to Grand Central in New York to take the train down to New Jersey but are attacked by a zombified Hawkeye, who turns Happy Hogan into a zombie and a zombified Sam Wilson who meets his demise at the hands of Okoye. A rather insensitive but very meta-joke to keep that Sam/Bucky tension going is Bucky’s response to Okoye’s apology for killing Sam, who was his friend. Unfortunately for Sam, Bucky did not feel anything about his “death”. Spider-Man who almost meets his demise as well is saved by the Cloak of Levitation while The Wasp fends off a herd of zombies to help the team get out of Grand Central.

Once the team makes their exit they have very little breathing room as they are attacked by a zombified Captain America who claims the life of Sharon Carter, turning her into a zombie. Bucky is forced to kill his best friend in a very meta way and hits Cap with the good ol’ “til the end of the line” phrase they always used with each other. Plus it’s also another tease of Bucky Barnes becoming Captain America and sadly we will never see it in live-action (we still love our new Captain America/Sam Wilson).

Things take a turn for the worse as The Wasp/Hope Van Dyne is infected after killing Sharon Carter. As she tries to keep the team focused on the mission she asks Peter Parker how does he keep himself so upbeat despite all of the tragedies he has faced, especially during the zombie apocalypse? Peter responds by mentioning Uncle Ben, which just so happens to be the first direct mention of Uncle Ben in the MCU. Peter mentions that Uncle Ben’s death, along with Tony Stark’s death and everyone else’s death has impacted him but the words of encouragement from Aunt May are what keeps him smiling through it all.

As with any horror-themed story, things just have to keep getting worse, in this case, the train has now stopped working and the team is stranded in the middle of nowhere. While they are close to Camp Lehigh, they still need to get through the horde of zombies waiting for them outside the train and the camp. In a last heroic effort, The Wasp/Hope Van Dyne sacrifices herself to get the team over to the camp.

Once at the camp, the team notices that the horde of zombies has stopped outside the gates. Here they meet with Vision (voiced by Paul Bettany) who reveals to them how he has been able to use the Mind Stone to keep the zombies at bay but also used it to bring back Scott Lang from the dead (he was killed by Hank Pym earlier in the episode). Vision dives into a ton of science mumbo jumbo that only Bruce Banner and Peter Parker immediately understood. But Vision was hiding something and was very keen to make sure that Bucky did not find what he was looking for (Bucky was looking for transport to get the team to Wakanda).

As Bucky is looking around the base he finds a crippled T’Challa/Black Panther who is missing a leg (the late Chadwick Boseman once again lent his voice to his character of T’Challe/Black Panther). He tells Bucky that they are in danger, while Vision, who is still with the team has now become aggressive towards the team. T’Challa reveals the truth to the team and tells them that Vision has been feeding parts of him to Wanda Maximoff who is now a zombie and is being kept under containment.

A reversal of roles now sees Vision trying to keep Wanda Maximoff alive and care for her all out of love as opposed to Wanda doing it herself. Vision reveals to the team that he tried to humanize Wanda again but her powers were too strong and resisted any treatment he was providing via the Mind Stone, so as with any other zombie she got hungry and needed to be fed; so he fed her. As Okoye goes to attack Vision for what he’s done Wanda goes on the attack and kills Kurt and eventually kills Okoye as well.

Vision who cannot find the will to leave Wanda behind pulls the Mind Stone out of his forehead, killing himself and unleashing the massive horde of zombies he kept at bay. Wanda, once again hurt by the death of Vision goes on the attack once again and sends Bucky flying (where did he land? we don’t know). Bruce Banner tasks Spider-Man with Avenging those who have fallen as he, Scott Lang, and T’Challa head to Wakanda and he fends off Scarlet Witch as The Hulk.

As the team flies off, we see that Hope Van Dyne has also been turned into a zombie. Peter Parker is now starting to have survivor’s guilt but thanks to King T’Challa he is able to ground himself once again. As The Watcher gives one last final speech, we get a look at Wakanda which has a horde of zombies outside its barriers but has been overtaken by a horde of zombies within the barriers and a zombified Thanos with a fully assembled Infinity Gauntlet.

This week’s episode of “What If..?” leaves a lot on the table to be explored but also leaves a ton of questions that need to be answered. More specifically, how did Thanos become a zombie? Tony Stark had to use his full arsenal of weaponry on Titan just to get a drop of blood from Thanos, so who was strong enough to turn this raging Titan into a zombie? Especially while wielding an Infinity Gauntlet.

As a whole, however, “What If…Zombies!?” really had the remedy to be one of, if not, the absolute best episode of the series thus far but keeping it more grounded and more censored with very little terror or actual horror really diminishes the impact in the theme of the story, which is horror and zombies. While the humor was great at times and severely flat in other times, this episode is almost on par with the premiere episode of the series which also felt hollow and fell a bit flat in its delivery. There are little to no complaints about the animation but the voice acting however is hit or miss as it is with every episode.

If anything, “What If…?” is really showcasing how much skill it takes to be a voice actor is. This is no slight against the actors reprising their roles, they’re film actors for a reason and they all don’t capture that same essence when voicing their animated counterparts compared to when they portray them in live-action.

Marvel Studios’ “What If…?” is streaming now on Disney Plus.