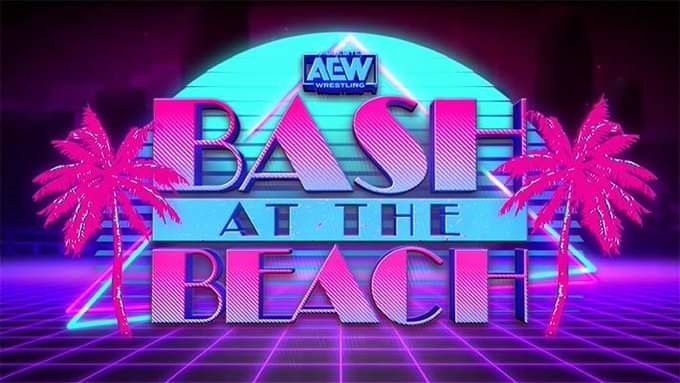 Here are your results for AEW: Dynamite “Bash at the Beach” Special Edition Part 1 from the Watsco Center in Miami, FL.

Before Dynamite went on the air:

Jim Ross, Tony Schiovane and Excalibur welcome us to a special edition of Dynamite and run down tonight’s top matches: Jon Moxley vs. Sammy Guevara and the main event of PAC vs. Darby Allin – with the winner of that match to face Jon Moxley next week and that winner will face Chris Jericho for the AEW World Title at Revolution!

Match 1: Kenny Omega & Hangman Adam Page defeat Private Party, Proud & Powerful and Best Friends to win the Fatal 4 Way Match and earn an AEW Tag Team Title Match against SCU on The Cruise of Jericho. After the match, The Elite get into a disagreement.

Segment: Cody Rhodes comes out along with manager Arn Anderson. He proceeds to cut a promo and agrees to all MJF‘s stipulations!
So therefore, MJF vs Cody is made official for Revolution and Cody claims he will give MJF his own scar!

Segment: a vignette is shown where a sinister voice is running down a lackey suit who is discussing potential new recruits into the Dark Order. The off-camera voice shows interest in recruiting Kenny Omega, Hangman Adam Page, Brandon Cutler and Michael Nakazawa!

Segment: Jon Moxley shows up to the arena in his new car to face Sammy Guevara.

Moxley will either face PAC or Darby Allin in a #1 Contender’s Match on The Cruise of Jericho, next week as part of Bash At The Beach!

Segment: Moxley is celebrating his win when all of a sudden, the lights go out. When they come to, the entire Inner Circle faction attacks Moxley in a 5-1 assault. Jericho removes one of his jacket’s spike ornaments and stabs Mox in his eye! He takes back his car keys and leaves with the boys.

Back from commericial break, and EMT officials are checking on Moxley and his injury. He is being helped backstage but is refusing medical treatment.

Match 4: MJF, The Butcher & The Blade defeat Diamond Dallas Page, Dustin Rhodes & QT Marshall in a six-man tag team match. DDP managed to score some sweet Diamod Cutters on Butcher and Blade throughout the match as well as a high spot dive from the top rope!

Back from commercial break and a graphic displaying the first-ever Steel Cage Match in AEW will happen: Cody Rhodes vs Wardlow on February 19th!

After the match, Moxley is seen coming out of the ambulance with a bandage wrapped across his eye and storms to the ring. He is being followed and chased by medics, referees and officials. Christopher Daniels was nearby and proceeded to help the officials in calming down and talk some reasoning to Mox. Mox grabbed a microphone and said he will face PAC next week, and no one and nothing is going to take the title opportunity away from him. He’ll be there whether he’s blind or one leg, he’s going to kick PAC’s ass!

After Dynamite Went Off The Air: