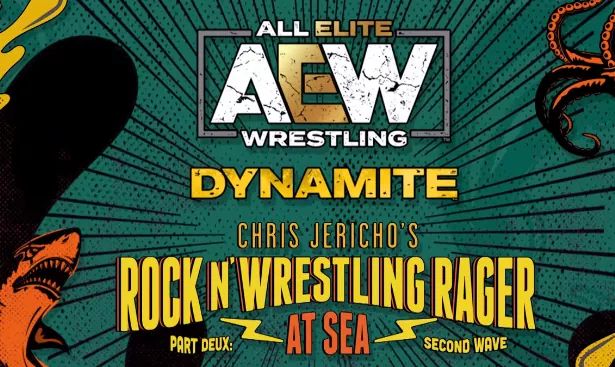 Here are your results of AEW: Dynamite‘s Cruise Of Jericho, part of Jericho’s Rock N’ Wrestling Rager At Sea, in conjunction with Bash Of The Beach, from January 22nd:

Jim Ross, Tony Schiovane and Excalibur welcome us from Nassau, Bahamas, atop the deck of the cruise ship.

After the match, The Young Bucks came to celebrate Omega and Page. Page, however, walked out with the tag belt and celebrated hinself outside the ring with fans, who grabbed him and body-surfed him all across the venue!

After the match, Tony proceeded to interview Britt on her win and her recent change of attitude and demeanor. The crowd starts to boo her, which prompted Britt to lash out at the fans. She asks why are they booing? She is a role model and points to her body and says she’s also the hottest female wrestler on the roster. She belittles Tony and reminds him that after WCW and before AEW, he was an assistant manager at a Starbucks! Tony shrugs it off and says it was a humbling and honest living. The crowd begins to chant “Tony! Tony! Tony!”, which angers Britt and storms off the ring.

Segment: MJF mocks and trash-talks Cody Rhodes, which prompts Cody to come out. MJF reminds him that he can’t touch him before Revolution or else their match is cancelled. Cody acknowledges and says he knows he can’t but THEY can — MJF turns around and The Young Bucks double-superkick MJF for Cody and then throw him into the pool to the delight of the crowd!

Back from commercial break, and a graphic shows that three (3) huge matches have been announced for next week’s Dynamite:

Segment: Jericho comes out to join JR and Excalibur at the announce table to color commentate and scout the match between Jon Moxley and PAC.

Moxley will now face Jericho for the AEW World Championship in the main event of AEW: Revolution PPV!