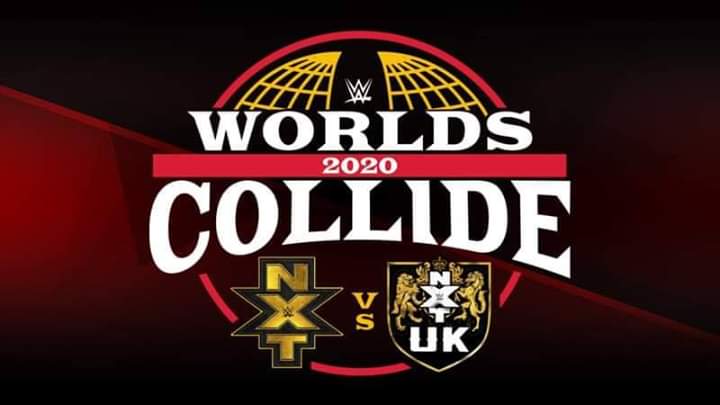 Here are your results from tonight’s WWE World’s Collide: NXT vs. NXT UK pay-per-view event, live from The Toyota Center in Houston, TX:

Segment: Cathy Kelley interviews the Grizzled Young Veterans and the Broserweights (Pete Dunne & Matt Riddle) in the crowd. She announces that the winners of the Dusty Rhodes Tag Team Classic will move on to NXT TakeOver: Portland to challenge for the NXT Tag Team Championship!

Match 3: Jordan Devlin defeats Angel Garza (c), Isaiah ‘Swerve’ Scott and Travis Banks in a Fatal Four-way for the NXT Cruiserweight Championship after Devlin hits the Devlinside on Scott to win the match.

After the match, Devlin stood on the announce table and cut a promo about how you should, “never bet against an ace!”

After the match, the two teams shook hands and hugged in a sign of mutual respect and sportsmanship.

Recent NXT signee Mercedes Martinez was in the crowd as well as upcoming NXT Women’s Championship challenger, Bianca Belair. Dakota Kai was also shown at ringside but Tegan Nox attacks her from behind! The two women brawl at ringside, with Nox tackling Kai through the ringside barricade, until security pulled them apart!

Segment: Finn Bálor attacks Johnny Gargano during a backstage interview! Trent Seven and Tyler Bate break it up, with Bálor exchanging some words with Bate.

Match 6: Imperium (Walter, Fabian Aichner, Marcel Barthel & Alexander Wolfe) defeat The Undisputed Era (Adam Cole, Kyle O’Reilly, Bobby Fish & Roderick Strong) in an eight-man tag team match. Wolfe was injured early on when a stiff kick from Fish appeared to connect with his jaw and knocked him out. This left Imperium at a 4-to-3 disadvantage. Strong put Walter through the announce table with an Olympic slam to temporarily take him out as well, but the big man returned and was able to pin Fish after a powerbomb!

After the match, the remainding members of Imperium stood tall and celebrated as the show went off the air ▪